Thought I’d post a few representative glimpses from my recent trip to see family in the East. Some things we did while I visited:

Every night at bedtime someone reads from the Bible to the younger grandchildren. I got to be that one a few times. Now even they are old enough to want to read aloud themselves to someone, and I provided a listening ear to many chapters of The Magic Treehouse stories.

“Rikki Tikki Tavi” by Rudyard Kipling, I was thrilled to find in an anthology in the house, and gladly read it aloud to W. It is part of the Jungle Books, and great fun to read aloud.

I read The Red Clogs to F.; it is an old story about childhood deception involving some muddy shoes. And part of Leif the Lucky to W.

Cook
F. and W. and I made Snickerdoodles, and one night the German student A.K. took it upon herself to make Goulash Soup and yeast bread, for which she needed a bit of help. That was a yummy dinner! 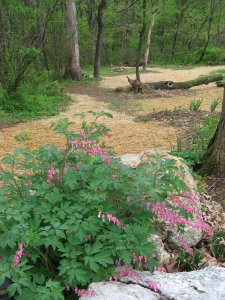 I helped A. by planting a strawberry tower using three pots she had around.
She was preparing some large areas of the back yard for seeding a lawn, and when the seed had been raked and rolled in, we

spread straw on it so that the rain won’t disturb it before it sprouts.
I enjoyed the blossoms on A.’s two apple trees, a Newton Pippin and a Fuji. This one is the Fuji.
Play Games
The grandchildren taught me once again how to play Mancala, and one day I played a couple of hours of a new version of Monopoly with W., aged seven. It’s not like it used to be, folks. Three times I landed on a square (see photo) that insisted I owed a fortune in just the interest on my credit card debt. I did not like that one bit, even if I did collect $2 million passing GO. It was fun to own several baseball parks, I will admit.
I helped F. and W. to play Twister, by spinning the arrow, and I took lots of photos of various grandchildren playing soccer or riding their bikes, skateboards, “rip sticks,” and s 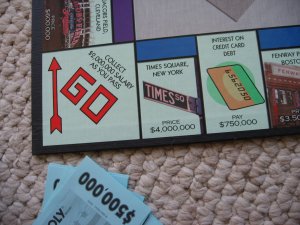 cooters. There was basketball, football, and mercifully little electronic gaming this time.

There were domesticated reptiles and mammals in the household, pets to admire. Also this frog, a discovery of an afternoon who found himself in a precarious spot. I believe he did survive and return to the woods.

Here is a 5th-grader grandson at work knitting a scarf, with his Easter basket gift to his mom by his side. They knit once a week in the classroom, but he takes the idea much further.

So many other household activities I was able to enjoy there, a hanger-on hanging out. I’m so thankful for the welcome, for the love, for the blessing of my husband to be gone for a spell.

Of course, thankful to be home again.