When the spring winds blow, the howling through the trees and the chimes of the patio bells drown out the call of the garden so that I can listen to the world’s discussions on many matters, including — wind! Wind power, to be precise, and wind farms. 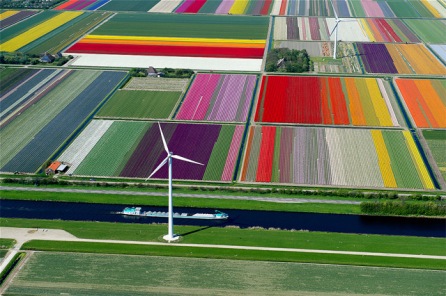 I had no idea that those scatterings of wind turbines on the Altamont Pass east of San Francisco were called farms. When a new turbine is installed they even call it a planting. Altamont is the wind farm I am most familiar with, but now I’ve seen photos of much more beautiful and even brilliant settings for these harnessers of wind energy, such as tulip fields in The Netherlands.

Turbines neatly lined up along a canal or placed here and there among what is primarily a tulip farm don’t impress me the way they do when spread over hills that would ordinarily be drab without them. In those cases, like the slopes in California that in summer turn golden brown — or a brown that is just plain dull — the wind turbines grace the slopes with dynamic art.

I haven’t taken the time to exit the freeway and drive to a good vantage point, but I think that one man who did got some lovely pictures that capture the beauty. The most artistic photographs cost more than I’m willing to pay for permission.

Several colorful photos are on the Pattern Energy site, gorgeous shots of their turbines at installations in Manitoba, Nevada, California and Texas. And some of these pages I’m linking to tell the stories of wind farm controversy in more depth than I will, so you might like to visit them for that reason, too.

The problem with the turbines is that they kill birds. The ones on the Altamont Pass kill more raptors than any other wind farm in the world, including the protected Golden Eagles, of which the world’s largest breeding population lives in this area.

This article explains that worldwide the deaths from wind turbines are a small fraction of total bird deaths from run-ins with man-made structures such as office buildings, power lines and our houses; who hasn’t experienced the dismay of hearing a small bird hitting – whack! – against a window? Even nuclear and fossil-fuel plants kill more birds than these converters of wind energy.

But it has been found that the more modern wind turbines, which are taller and slower, kill a much smaller number of raptors. So the old ones are being replaced. Bird and bat mortality are the topics of this site, annoyingly formatted but with useful links and an explanation of why Altamont wind turbines have been particularly deadly for birds.

Driving along Interstate 5 in California, we more than once have passed a truck carrying one turbine blade. These things are huge!

Here is a photo of a “re-planting” of a turbine.

If I were to take a trip past those fields of wind turbines this month the scene might be greener and wetter, something like this. 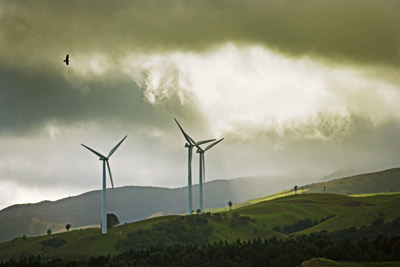 The labor and intelligence of mankind that is applied to growing tulips results in a product that gives delight to millions of people. The wind turbine is an elegant result of technology, a thing of beauty in itself for its simplicity of design, but also as a symbol of man working with nature and using the gifts of the Creator. Thanks to God for putting some of His own creativity into us His creatures. May the glory go to Him.

6 thoughts on “Blowing over tulips and into turbines…”