Not infrequently the feeling of unreality comes upon me: It doesn’t compute that I am living a full life without my husband. He has not lent his strength to the shovel, or played music while I made dinner, or given me an opinion about one single thing. For three years. Really?? My mind does its best to go along with my body as it sleeps alone, and wakes up alone, walks alone, and makes always unilateral decisions. But occasionally it says, “Wait a minute! I’m confused… Who are we…? I don’t like change!”

I think that’s part of the reason I act as though every little thing I think and do must be documented here or in my bullet journal, or my garden journal, or a letter to someone. I am watching myself, noticing that this strange woman does get up every day so far, and worships, and comes up with new ideas for the garden; she has friends who act as though she is as normal a person as can be. 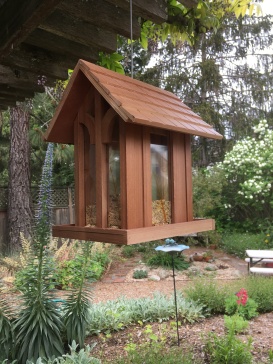 Of course I mostly go with that assessment without thinking about it. My, do I have friends! They are the greatest. Since Mr. and Mrs. Bread gave me a new Chapel Birdfeeder for my birthday, I also have blue jays enjoying my garden like never before.

Book friends! Several women readers at church have started a reading group. They read Jane Eyre first, but I didn’t join their ranks until this spring when they are giving themselves six weeks to read Work by Louisa May Alcott, a book I’d never heard of. How can I even finish Middlemarch and write about it, much less finish Work? It does seem that I am testing the limits of this new life I am creating, and I act at times like a silly crazy woman. Would I rather spend time on Work or housework? I don’t even know!

My friend “Mr. Greenjeans” and his wife gave me a tour of their garden the other day, and quiche afterward. He is an encyclopedia of plants and loves to experiment with exotic seeds in his greenhouse. This year he has potato towers that have an upper storey that will be for melons!

I was interested in his mystery tree, which he thinks sprouted from one of the seeds in a packet that was a South American mixture. I was thinking “Africa” when I went home and searched online for some tree from that part of the world that had these green-tipped narrow trumpet flowers, and the same kind of leaves. I couldn’t find anything. (My friend Father C. in Kenya said they have this tree, but he doesn’t know the name, and his pictures didn’t look very similar.)

Soon Mrs. Greenjeans clarified that the source was likely South America, not Africa. 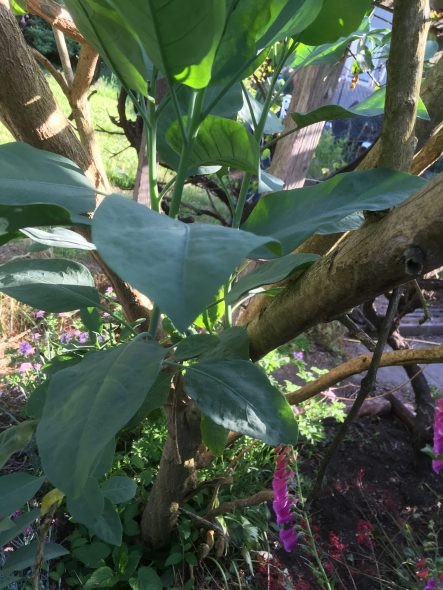 Update: Lucky for me Anna in Mexico saw my post and in her comment below she identified it as nicotiana glauca or Tree Tobacco, originating in Argentina.

My farmer friend has also been successful in growing several seedling trees of Red Mahogany Eucalyptus, which makes great lumber, and the Australian Tea Tree, which puts on a gorgeous display of white blooms, and from which he explained how I could make tea tree oil, if I would accept one of the trees he was offering me. But I took home a lovely columbine instead, which I know can find a small place in my garden.

Mr. Greenjeans also makes dough at least half the time for our Communion bread baking teams at church. For some months I have tried to pick tiny pink specks out of the dough as I am rolling it; today I heard that they are from Himalayan salt that he uses! So now I am happy to see them.

I was able to do all these kneading-rolling-cutting things because my sprained finger is finally better! Here is our team leader putting some prosphora into the oven this morning:

Team Leader and my friend (Nun) Mother S. have invited me to go walking or hiking a few times lately. Once we went to the same park I last visited the day of Jamie’s birth, the day after my husband’s funeral! Because of a downed tree blocking the trail … 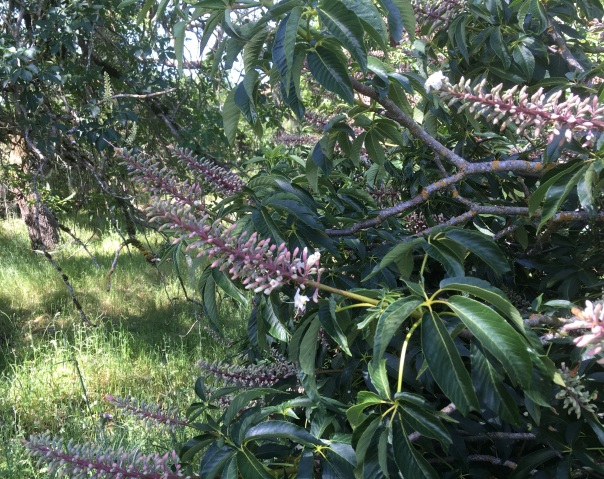 … we weren’t able to take the shady route by the creek, and the sun was hot, so I lent Mother S. my hat.

Not as many wildflowers caught our attention in May as three years ago in March, but I did find a few.

Back home in my garden, the red poppies have opened, later than the pale yellow by a month. My skirt blew into the frame for contrast. 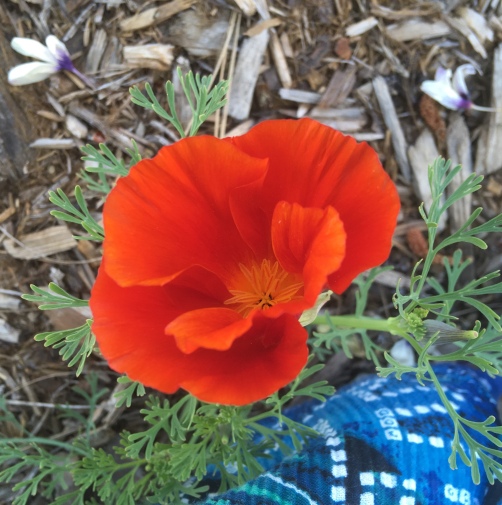 The last time I walked by the creek – at least a week ago! – I cut these roses, which because of the way they naturally fall over a fence are curved all funny and do not work very well in a vase, unless you put them on the top of the hutch the way I did, so that they hang down above my head as I sit here at the computer. Sweet things!

Last weekend son Soldier and his family were here, which made for a splendid couple of days. Liam is nearly six years old. He reads everything, and I saw him poring over a few books from my shelf…. That was a new thing, and a little sad, because he never asked me to read to him, but he did help me cut up my snowball clippings. He is good with the loppers or rose pruners.

Tomorrow I’m showing one elderly lady from church my India pictures. The next day I’m visiting my friend E. who is 102 now and who gave me the knitting needles that her mother-in-law gave her when she got married! This weekend my friend O. has engaged me to feed his cat Felafel while he is on a trip, and give him thyroid pills in tasty pill pouches. I met Felafel tonight and he is very friendly and agreeable.

For Soul Saturday I’ll make a koliva because my goddaughter Kathie’s 3-year memorial is near. And Holy Spirit Day, the day after Pentecost, is the same as Memorial Day this year; we have a prayer service at a cemetery. It’s quite a week, busy with various good things. And this is really me!

15 thoughts on “Not random but various.”