I landed in Colorado with Soldier’s family four days ago. The airport and airplane were fun for me and the boys because it was their first experience, and because it was a short trip, to and from smaller airports and on Southwest Airlines which seemed to me much more easygoing and helpful than my usual United travel.

We have been in this Airbnb house in Colorado Springs for four nights. It has plenty of room for three wild Indians (as my mother’s generation would have called them, but I try not to) to race up and down stairs and roughhouse, yelling, shouting, and laughing. If I can get them to sing with me it’s sometimes possible to channel this exuberance into plain laughing, which carries less risk of maiming.

Sing Through the Seasons from the Plough Publishing House has been for our family a wealth of children’s songs that are joyful music for all ages. I have been singing many of the original 99 songs of the first edition for over 40 years, but I’ve never introduced so many in as short a span as during this last week.

I found a copy of the later edition I had bought used, and brought it along in my suitcase, and the three brothers and I have sat on the couch for long periods singing, “Nibble, Nibble,” “Where Are the Froggies When the North Wind Blows,” and many other favorites. “Trot Along, My Little Pony” by Marlys Swinger was a lullaby I used to sing to the babies, leaning over their cribs to pat them to sleep. Even 2-yr-old Brodie sings in his husky voice with “Nibble, Nibble,” and anticipates the ending when he can chime in with, “And the rabbit in my heart is you!”

Last night while the boys were waiting for dinner I taught them “Three Little Puffins.” They giggled through the song at the idea of puffin birds stuffin’ themselves with muffins, but the giggles turned to hilarity when I started calling them my own Three Little Puffins. 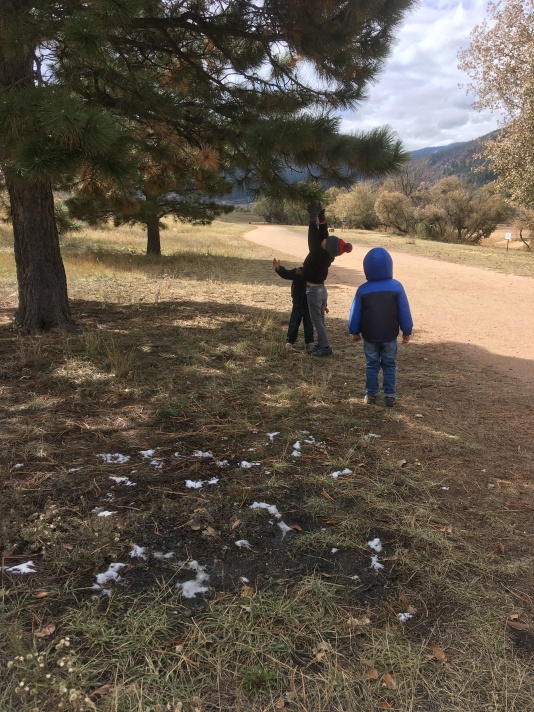 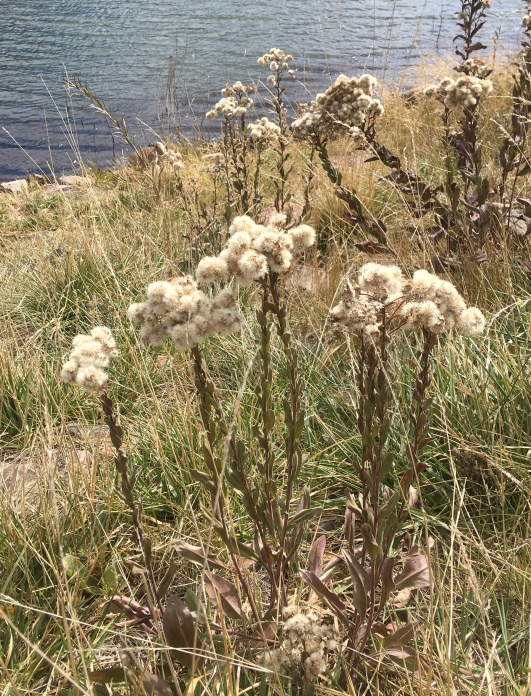 We’ve been on a walk around Palmer Lake just to the north of us in the community with the same name. A few bits of snow were still on the ground from Sunday, the day we arrived right after a snowfall, and I wished I had brought my wool scarf against the wind. We “did school” the very first morning here, because their mother Joy is incredibly organized, and have watched videos on Grandma’s laptop about Deep Sea Fishes, Dragonflies, and How Deep Can We Dig Toward the Center of the Earth?

At the closest public library, in Monument, Joy was able to get a library card, and we brought home lots of books. Not only that, but behind the library is a lake or pond where ducks swim, and the librarians give free cups of cracked corn for feeding the ducks. 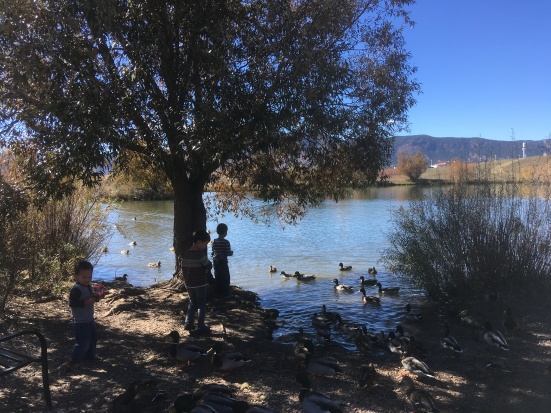 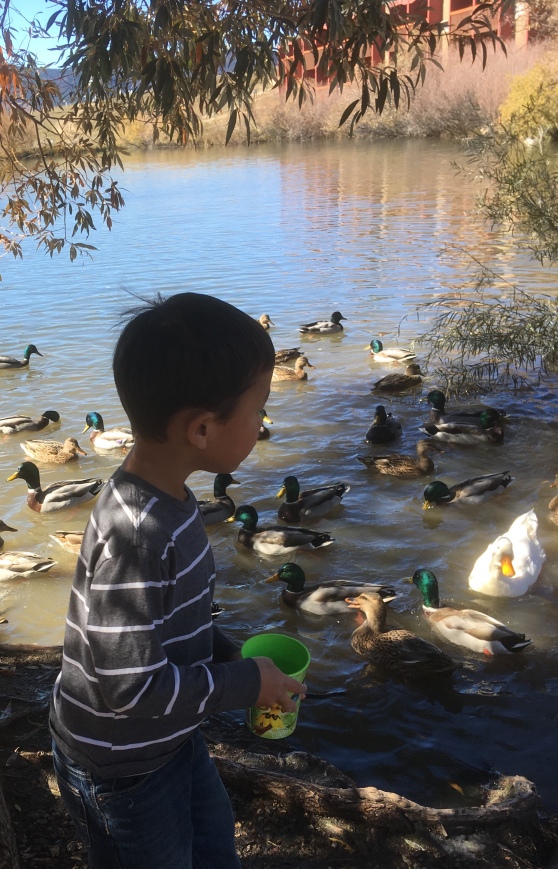 At this house there are toys and games; Liam found a turntable Scrabble board and tiles, and wanted me to play with him. I would rather play Bananagrams, but most of his family’s belongings are in storage, so we don’t have that game here. Yesterday he and I drove to Walmart to pick up a few things, including Bananagrams, but the store had just stopped carrying it. I told the salesperson, “I bet Target has it!” We substituted a bunch of bananas, and a new Scrabble game that had all its parts. Liam took to this more complicated word game with enthusiasm. We love words! 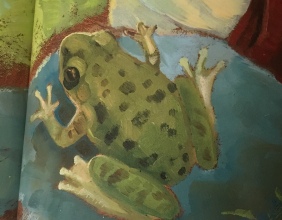 I am nearly hoarse from all the singing and reading, but still want to do more, and usually at least one of my “puffins” is more than willing. This evening while dinner was cooking I read to dear Brodie four of his favorite books, including What Do You Hear, Angel?, by Elizabeth Crispina Johnson. It has plenty of repetition to please the child’s ear, but the message conveyed is a fundamental truth of the cosmos that is lifelong sustenance: Things seen and unseen are singing the same song. The illustrations by Masha Lobastov confirm that idea with images of a happy child engaging with, you might say, earthly and heavenly messengers. 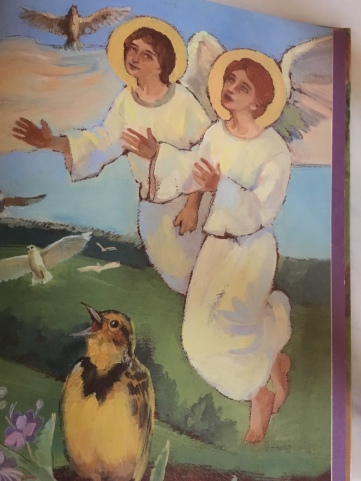 That’s what we are living every day.

18 thoughts on “The singing life with boys.”