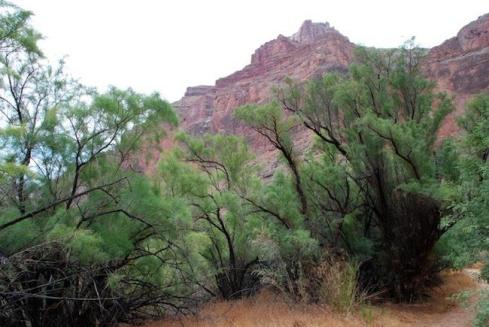 My most recent reading about tamarisk trees was in Willa Cather’s Death Comes for the Archbishop, which is about two French missionary priests serving in New Mexico in the 19th century. In Santa Fe their house has a garden, with poplars and tamarisks:

On the south, against the earth wall, was the one row of trees they had found growing there when they first came, — old, old tamarisks, with twisted trunks. They had been so neglected, left to fight for life in such hard, sun-baked, burro-trodden ground, that their trunks had the hardness of cypress. They looked, indeed, like very old posts, well seasoned and polished by time, miraculously endowed with the power to burst into delicate foliage and flowers, to cover themselves with long brooms of lavender-pink blossom.

Father Joseph had come to love the tamarisk above all trees. It had been the companion of his wanderings. All along his way through the deserts of New Mexico and Arizona, wherever he had come upon a Mexican homestead, out of the sun-baked earth, against the sun-baked adobe walls, the tamarisk waved its feathery plumes of bluish green. The family burro was tied to its trunk, the chicken scratched under it, the dogs slept in its shade, the washing was hung on its branches. 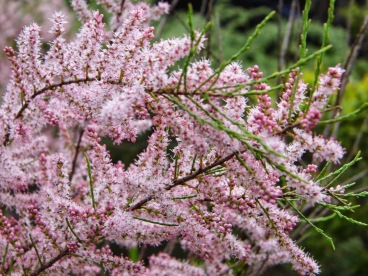 Father Latour had often remarked that this tree seemed especially designed in shape and colour for the adobe village. The sprays of bloom which adorn it are merely another shade of the red earth walls, and its fibrous trunk is full of gold and lavender tints. Father Joseph respected the Bishop’s eye for such things, but himself he loved it merely because it was the tree of the people, and was like one of the family in every Mexican household.

You know how people are always trying to figure out just what the manna was, that God gave the Israelites to eat in the desert? Some think it was the sap of the tamarisk tree, as Wikipedia tells us: “At the turn of the twentieth century, Arabs of the Sinai Peninsula were selling resin from the tamarisk tree as man es-simma, roughly meaning ‘heavenly manna.’ Tamarisk trees (particularly Tamarix gallica) were once comparatively extensive throughout the southern Sinai, and their resin is similar to wax, melts in the sun, is sweet and aromatic (like honey), and has a dirty-yellow color, fitting somewhat with the biblical descriptions of manna. However, this resin is mostly composed of sugar, so it would be unlikely to provide sufficient nutrition for a population to survive over long periods of time, and it would b

e very difficult for it to have been compacted into cakes.”

But honey that bees make from tamarisk nectar — that’s for real and you can buy some right now. Rusty on her Honeybee Suite site calls it a “dark secret,” and says it tastes like “malt and molasses topped with overtones of horehound and citrus—and not excessively sweet. It had a lingering, smoky, slightly bitter aftertaste.”

Honey that is not excessively sweet? I guess it’s all relative. Emily Heath on Quora explains: “Nectar, which honey bees collect to create honey, varies considerably in the types of sugars it contains – some nectars are mainly fructose, some mainly glucose, some mainly sucrose, others roughly equal mixes of the three. This causes variation in the sugars present in the honey, depending on which nectars the bees collected… An average honey which has not been tampered with by humans might contain 17-19% water, 38-40% fructose, 31-35% glucose and 1-3% sucrose.” Here is another interesting site that compares many varieties and benefits of honey: Honey Varieties.

It was when I began to look for photos of tamarisk trees that I found warnings about their invasive and supposedly thirsty qualities. People say they take more water from the ground than native trees, and also crowd them out. After searching for a deeper analysis of their current place in the arid ecosystems of this area, I was thankful for an article in Discover Magazine, “The Battle Over the Tamarisk Tree,” a few paragraphs from which I’ll share below. It explains about the complex interrelationships of the flora and fauna, including the current dependence of the Southwestern willow flycatcher on the tree. At first, local and federal agencies attacked the trees with bulldozers, herbicides, fire and chainsaws; then they found an also non-native insect pest to help with eradication.

I should mention that the genus Tamarix includes 50–60 species of flowering plants. The one that is of most concern in the Southwest seems to be Tamarix ramosissima.

“In 1930, [the tamarisk] was a cure-all for erosion concerns in the West. Before long, it was vilified as a water-hogging monster. And by the 1950s, federal and state agencies had galvanized to bring the monster down.

“But tamarisk isn’t quite the monster it’s been made out to be. Sure, it’s highly flammable, and it may salinate the soil when it drops its salty leaves. But water hog? Turns out, it uses roughly the same amount of water as native riparian trees like willows and cottonwoods. 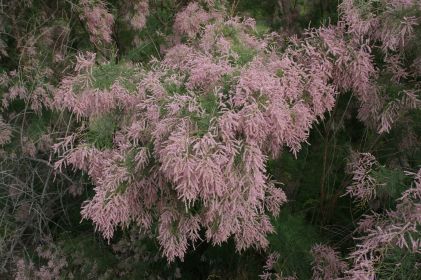 “Since the middle of the 20th century, humans have dramatically altered western rivers and made it harder for native trees to compete. We’ve built dams and diverted water, and we’ve tamed the periodic floods that once spilled over riverbanks to sprout new generations of willows and cottonwoods. As we engineered the rivers, tamarisk increasingly had the upper hand.

“The U.S. Department of Agriculture began searching for a tamarisk biocontrol in the mid-1980s. By 2001, they’d launched the tamarisk beetle program, releasing the insects at 10 different sites with the caveat that no releases would be permitted within 200 miles of a known flycatcher nest.

“But by 2008, after an unsanctioned beetle release in southern Utah, Diorhabda carinulata reached the Virgin River: flycatcher habitat. Ecologists worried the beetles would destroy the tamarisks that this unique bird had come to rely on for nesting. And in 2010, the USDA ended the program.”

The beetles did not go away, and some people are still monitoring their numbers, hoping that they will help to restrain the tamarisks a bit. I guess the flycatchers don’t eat beetles that munch away at their homes; they like winged insects best.

An older article at Terrain.org, “The Thirsty Tree,” explains in more detail how our human impact on rivers created the situation in which the tamarisk, also known as salt cedar, could dominate:

“Groundwater pumping, overgrazing, and the construction of dams altered the natural pulse of a river’s seasonal cycle. Was it possible that salt cedar, well-equipped to deal with salt and drought, simply moved into niches where native trees could no longer take root?”

“Water savings—that goal meant everything to the politicians and resource managers of the Southwest. To ‘save’ water meant not to conserve it, but to rescue it from rivers and aquifers and make it available to humans.”

“The old idea of ‘plant as machine,’ a monster of our own making, imagines salt cedar roots drinking from a deep bucket of water, easily reallocated to human use. The reality is much more complex. Stark numbers ignore the intricate workings of tree, rain, soil, river—not a machine whose parts can be scrapped for other uses, but a delicate dance of interrelationships.”

The history of water use in the American West is fascinating and depressing. If you want to understand more about it, Cadillac Desert is a must-read. More primitive peoples didn’t use water the way we have in the last couple of centuries, so there was no reason to see the tamarisk tree as anything but a blessing. Our holy forefather Abraham was of this mind.

The tamarisk tree is mentioned more than once in the Bible, but maybe the most striking reference is in Genesis 21:33, where we are told that “After the treaty had been made at Beersheba, Abimelek and Phicol the commander of his forces returned to the land of the Philistines. Abraham planted a tamarisk tree in Beersheba, and there he called on the name of the Lord, the Eternal God. And Abraham stayed in the land of the Philistines for a long time.”

Botanists and scholars think it was probably the Tamarix aphylla, or athel pine, that Abraham planted, and I have read in some places that it takes hundreds of years to get to its full height. It takes several generations, at least. As has been noted, you don’t plant it for yourself, but for your grandchildren, and beyond.

Abraham truly had the long view. No doubt his friendship with God, and the truth of things that he could know from closeness to his Creator, gave him the ability to look toward the future and make provision for it. I wouldn’t be surprised if he planted more than one tamarisk tree in his life. And it seems likely that after the Israelites endured 400 years of slavery in Egypt, and wandered in the desert another 40 years before entering the Promised Land, they were very glad to find tamarisk trees waiting for them, and to sit down in their shade.

10 thoughts on “Monster or member of the family?”