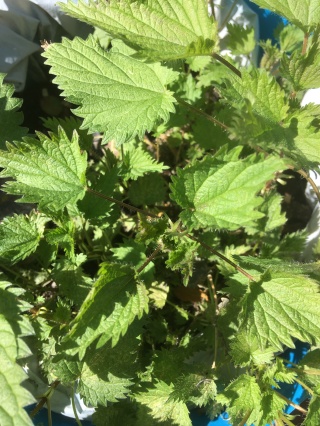 I’m plant-sitting for a friend who is between lodgings, and one of the specimens in my charge is a pot of healthy nettles. The owner told me to be sure to snip and eat the leaves frequently, because she (the plant) likes that.

Yesterday I stayed home all day, and accomplished a lot of little tasks, including much puttering and pottering outdoors. Though at first I just sat in my corner by the guava and the olive trees, while eating a late breakfast, because the whole Creation had pulled me out of the chilly house into the garden to soak up its benefactions and warm my blood.

We have entered the season when I leave the garden hoses lying around untidily; it adds “human interest” I’m sure. All the lightweight collapsible hoses I invested in got leaks, and I have gone back to heavy and sturdy hoses that last. They are good for strengthening my arms, which is something Proverbs 31 tells us women to do anyway. The bushes with the new leaves that glow like the sun are dwarf pomegranates.

The day before yesterday, I had told myself, “You only have to do one thing after another — and keep doing it — and in that way you will make a dent in the disorderliness that represents a disheartening backlog of work. Even a little improvement will ease your load!” Of course it helped that I ran no errands at all and in that way avoided having any of those transition times coming and going, which seem to confuse my mind.

First thing: feed the poor lemon tree. I was taught not long ago that it wants feeding four times a year, and after I fed it only two times last year it gave me a good crop. Then I “paused,” and don’t know when it got its last feeding. Now I have set an alarm in my phone to remind me. After the feeding, I gave it a little trim, mostly on top. The photo is “After.”

Near the lemon tree is my little California Pipevine, Aristolochia californica, which I mentioned here recently. It is growing a lot and has several flowers and many new leaves. I read quite a bit about it last night and learned that it is native only to Northern California. It’s very modest compared to showier species of Dutchman’s Pipe, but it is exotic enough to me. I kept wondering what the flowers would look like when they open, but it appears that this is it! If you think it looks carnivorous, you are not alone; in the past people did think that, but it seems they trap but don’t eat: 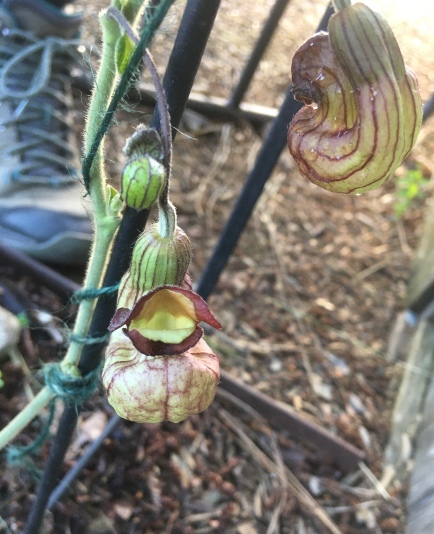 “The flowers have an unpleasant odor which is attractive to tiny carrion-feeding insects. The insects crawl into the convoluted flowers and often become stuck and disoriented for some time, picking up pollen as they wander. Most eventually escape; the plant is not insectivorous as was once thought. Fungus gnats (Mycetophilidae) may prove to be the effective pollinators.”

They call this “pollination by deceit.” The flowers dry up and crumble and thereby let the insects out to do their bidding. There are over 500 species of Dutchman’s Pipe, known as birthwort, or Aristolochia. Equally exotic and gorgeous butterflies lay their eggs on pipevines all over the world. Do you have any growing wild in your part of the world? Here are some from Sumatra and Brazil: 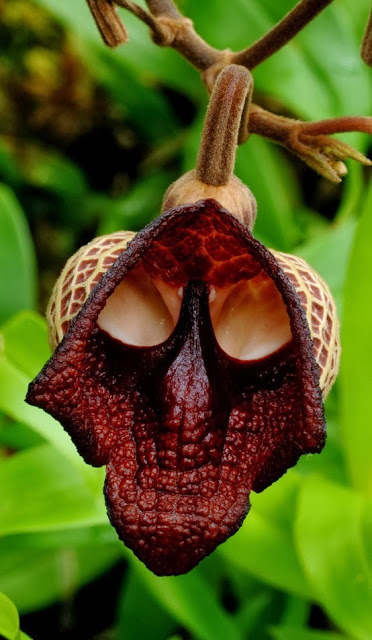 The flowers are known to have a bad smell, but mine are few and hard to get at, so there is not enough scent for me to notice. It dawned on me that if a Pipevine Swallowtail laid eggs on my plant, and caterpillars hatched out and began eating, they would die of starvation very soon, and I would be sad about that. And if my plant gets so robust that it covers the fence and draws lots of butterflies because its many flowers are exuding stinkiness… well, that would be a mixed blessing. I guess I’ll just wait and see what happens.

In the meantime, I took a whiff of these geraniums who are also in my temporary nursery section; they only smell delicious. For dinner I cooked up a modest mess of nettle leaves.

6 thoughts on “My birthwort is modest.”