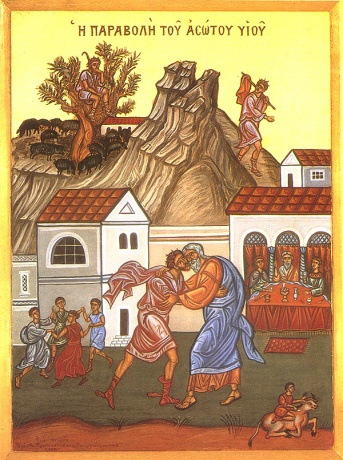 Regret is an appalling waste of energy; you can’t build on it; it is only good for wallowing in.
–Katherine Mansfield

This contrast of building vs. wallowing is a good one for me to keep in mind as we approach Lent. Today is the Sunday of the Prodigal Son. This young man probably didn’t exactly grunt around in the mud with the swine even if he did covet their food, but I wonder if he wasted a lot of time feeling miserable before he said, “I will arise and go unto my father.”

Glory to God, we can get up every time we fall and by the power of the Holy Spirit go to our Father in prayer, saying as did the Prodigal, “I am not worthy to be treated as your son.” And we can expect to be embraced, and to be built up in Christ.

Addendum: By the Linked-Within feature I discovered that I did in fact write about the Sunday of the Prodigal Son before, and even used the same icon. It’s sort of a sequel to this part, discussing what happened after he left the pigsty.

4 thoughts on “Quote of the Week – Regret”