THE CHIMES OF NEVERWHERE

How many times did the Church prevent war?
Who knows? Those wars did not occur.

The neither state of Neverwhere
is hard to place as near or far
since all things that didn’t take place are there
and things that have lost the place they took:

Herr Hitler’s buildings, King James’ cigar,
the happiness of Armenia,
the Abelard children, the Manchus’ return
are there with the Pictish Grammar Book.

The girl who returned your dazzled look
and the mornings you might have woke to her
are your waterbed in Neverwhere.
There shine the dukes of Australia

and all the great poems that never were
quite written, and every balked invention.
There too are the Third AIF and its war
in which I and boys my age were killed

more pointlessly with each passing year,
but there too half the works of sainthood are,
the enslavements, tortures, rapes, despair
deflected by them from the actual

to rain on the human-sacrifice drum
which millions never have to hear
beating for them in Neverwhere.

I discovered an earlier version of the poem online which speaks overtly of the Devil and of Christ’s love, but this is the one the poet chose to include in Selected Poems. 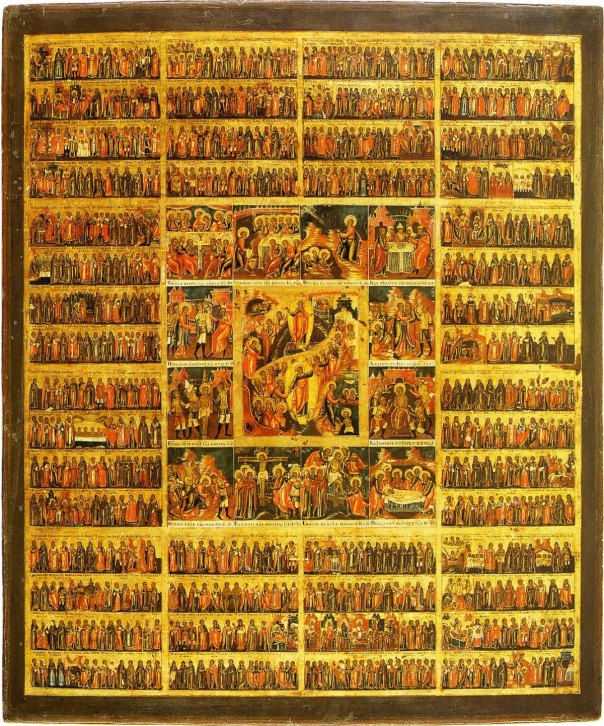 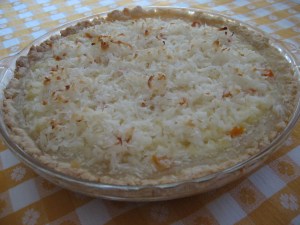 This week’s pies probably aren’t anything you will want to imitate, but I couldn’t miss the chance to add a post to the Pie category.

First there was the Lenten Pie Challenge. For myself, I would not bother baking or eating a pie made without butter, or at least eggs, and would wait until after a church fast to eat the real thing. But today at church we were commemorating Saint Lawrence of Rome, patron saint of our rector, who loves pies. We are in the middle of a short period of fasting, so if we want to show our appreciation by baking pies for him, they need to be vegan.

Let me interject a story about today’s saint, who lived in the third century, and an icon that is painted on a door in our church. It shows St. Lawrence and also the first martyr Stephen. Click on it to see more detail, and their names.

The Jewels of St Lawrence

After the death of Sixtus, the prefect of Rome demanded that Lawrence turn over the riches of the Church. Ambrose is the earliest source for the tale that Lawrence asked for three days to gather together the wealth. Lawrence worked swiftly to distribute as much Church property to the poor as possible, so as to prevent its being seized by the prefect. On the third day, at the head of a small delegation, he presented himself to the prefect, and when ordered to give up the treasures of the Church, he presented the poor, the crippled, the blind and the su

ffering, and said that these were the true treasures of the Church. One account records him declaring to the prefect, “The Church is truly rich, far richer than your emperor.” This act of defiance led directly to his martyrdom.

Last year for this celebration I made some apricot pies with lots of walnuts. They would have looked much like the picture below but for the walnut meal on top of the pies that didn’t get photographed. This year I decided to try something with coconut and pineapple. I used canned pineapple, shredded dried coconut, coconut milk, and some other things. The challenge was mostly knowing how much thickening to include. I made two, and they were well-received at the brunch following church, but I’d like to improve the recipe before I pass it on. It’s unlikely, at any rate, that many of my readers are holding their breath waiting for vegan pie recipes.

It didn’t feel right, making pies to take to church when my dear laboring husband was not there to partake–even though he did assure me that my weird pie did not appeal. So I made him a cherry pie today that he and his father could share.

On rare occasions I have been given fresh pie cherries and without a doubt they make the best pies. But the menfolk around here are perfectly pleased with the results that come from using canned pie filling, so I often settle for that. There’s no recipe to share, except to say that for one 9″ or 10″ pie you must buy two

cans of filling at a price that is likely outrageous these days. I recommend finding a generous friend with a cherry tree.

Still, the pie is homey-looking and you can almost smell the butter. In my past pie-posts I forgot to tell you that when I bake a pie that needs to be in the oven for the better part of an hour I put some foil collars around the fluted edge of the crust, to keep it from getting too brown. Many people don’t eat this part, but for the sake of us who do, I want to keep it edible and beautiful. A pie doesn’t seem too appetizing to me if its crust is approaching the color

of the bottom of my oven. This task takes a few extra minutes, because one has to be careful not to smash the dough with the foil. You might decide that it’s not worth the trouble.

You have to watch the pie in the oven and decide whether to take the collar off a few minutes before the pie will be coming out. It can happen that if your pie dough recipe doesn’t have sugar or milk in it, the crust will not brown as much as you want if you leave the protective collar on until the end of baking. This pastry reci

pe uses sugar, which is probably why the crust browned nicely even with the foil reflecting some of the heat. I didn’t remove the guard until the pie came out of the oven.

This cherry pie might have kept a sharper fluted edge if I’d stuck it in the fridge for a while, but I was too impatient. And I don’t mind the relaxed look.