Yesterday I made a successful cake in my Nordic Ware honeycomb pan. My first attempt a couple of weeks ago didn’t work out; it was a honey-and-lemon cake recipe not designed for the pan. There wasn’t enough batter to fill it properly, so the pieces of cake that were supposed to be pull-apart on a plate, instead fell apart coming out of the pan, having no foundation, you might say.

I put the lemony glaze on some of them anyway, and gave most of the little ragged pieces away. 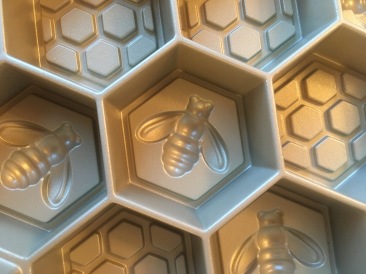 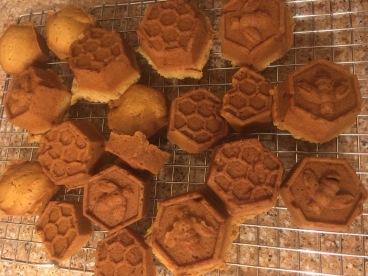 This week I found an earring that I had given up for lost forever, so I decided to bake a cake in honor of St. Phanourios. I noticed that the recipe called for three cups of flour, and that is the amount I had deduced I needed for a honeycomb cake, so I tried it in my pan, and it came out perfect. I substituted honey for the sugar, because I want every cake I bake in this pan to honor the honeybee in every way. I was going to a study on the book of Romans at church last night, preceded by a potluck, so I took my cake to share.

Today I had a load of firewood delivered, half a cord only. Last December I had bought a whole cord, and we used most of it. I don’t know why I didn’t do that again… some deep psychological reason, I’m sure, having to do with — what else? — this remodeling project. The electricians were working upstairs all day, by the way.

I didn’t have a plan for who would stack my wood. In the back of my mind I had the idea that I might just cover it with a tarp right there in the driveway because anything beyond that was too much to think about. But it wasn’t raining, so I thought I might as well put a few logs where I wanted them before covering it. I carried some into the house, filled up the wood rack in the garage, began a neat stack in the utility yard… and before long, I had stacked it all! I had also covered the stack outside with a tarp, and swept up the driveway. And it only took two hours. Just as I was finishing I felt some raindrops on my head.

Truly cold weather isn’t forecast to return as long as the rain is hanging on,
but when we’re ready to get cozy by the wood stove, we’ll be ready!

The nuns at a nearby monastery harvest lavender every summer at various neighbors’ properties up in the hills and mostly at the end of long unpaved and/or winding roads. They had asked the young people from parishes in the area to help them today, and when some families had to back out at the last minute, several adults including me pitched in.

I had to get up before 5:00 to get fueled up and make the drive to arrive early enough for the sisters to give us a hearty breakfast. But even before that, we learned that Mother Anna who recently fell asleep in death had still not been buried, and we might go into the church and say good-bye to her. Mother Angelina was reading Psalms at the head of the casket when we went in; we all filed past and kissed the little icons that were next to her, and the Gospel. It was sweet to have this opportunity.

After breakfast and chatting we caravaned to the first and most scenic spot, where we picked from a big clump of lavender bushes stuck in a low spot among olive trees at a vineyard. We were given little scythes, which seem the perfect tool for any bush you want to grab hunks of and slice off, to shear it. I plan to get one for my own garden right away, so I can give a break to my finger joints.

As we were packing tools and water, and applying sunscreen and bug spray — the sisters said they had been “chewed up” by chiggers one year — Mother Tabitha was on the phone a lot trying to arrange for Mother Anna to be buried this afternoon.

One of the lavender friends, with the most to pick, cancelled our visit because they didn’t think their insurance covered children on the property, and they had seen a few rattlesnakes lately. But the monastery had already this season delivered 200 pounds of lavender flowers to the distiller, so they were not worried. Some of what we were tackling was past its prime and too dried out to use. We sheared it off anyway but put it in the discard pile. 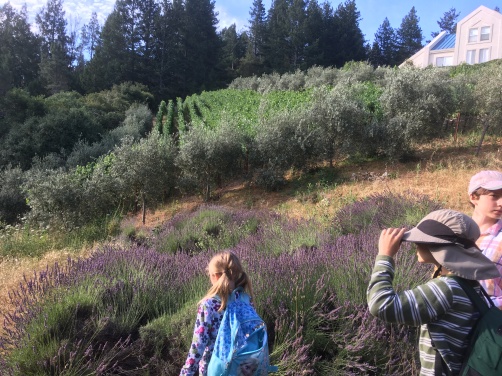 We eventually filled the back of a pickup truck with the blooms. Bees were thicker on them in the truck than they had been in the field. The farmer lady gave us plums and peaches for a snack, and insisted that the sisters take buckets of dahlias and gladiolas for the burial of Mother Anna. 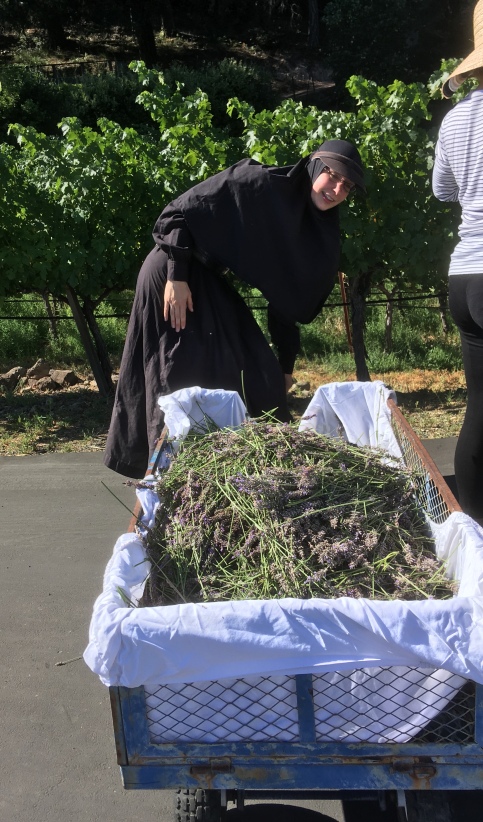 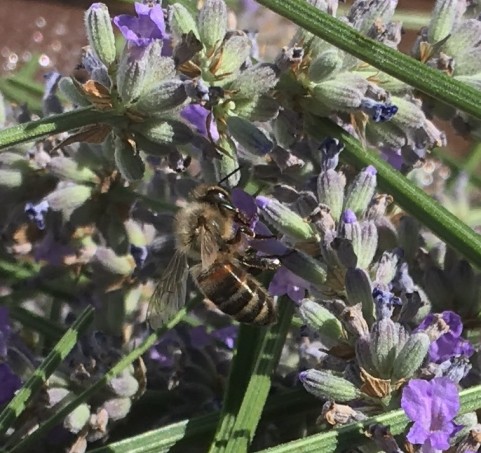 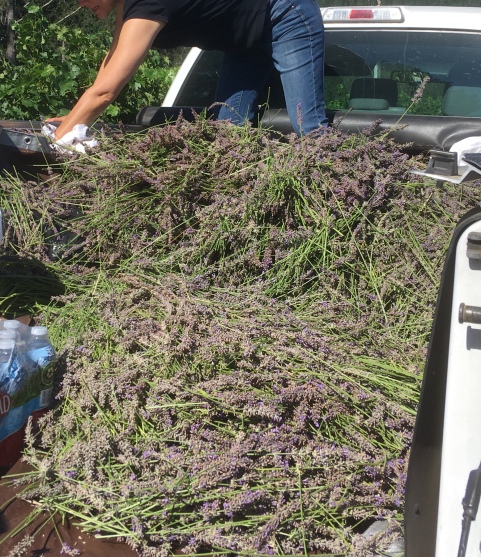 The second, smaller harvest was at a house that had barely missed destruction in the fires of 2017. Most of their lavender bushes, which had formerly lined the long driveway, had burned and not been replaced. To the south and to the north, close to the front and back of the house, were patches of blackened trees where the wildfire had swept through erratically.

Soon we were headed back to the monastery, hot and dusty, and again they fed us very well! But Mother Macrina drove the pickup load straight to the distiller, to have its essential oil extracted. The by-product hydrosol, the lavender water that is left over, they also use, to make sprays good for cleaning and dusting, and deodorizing. Next time I have a chance, I’ll buy some lavender products from them. And maybe tomorrow I’ll look at my own lavender bushes and see if they are ready to harvest!

It’s convenient that my next-door neighbor has gone camping this weekend, because I need his yard waste can. I forgot to ask him but I am pretty sure he will be okay with me using it to load up with all of the garden clippings I’ve collected in just two days. He has his dragster parked long-term and rent-free on a few inches of my driveway so he likes to feel that he is doing things for me, too.

The fava beans were a big job! Yesterday I cut all the pods off the 30-something plants that grew from two packets of seeds I’d bought online. I might have started the harvest earlier if it hadn’t been so rainy. As it was, I got caught in a surprise shower in the  middle of the process. Before the last week of rain the beans were overflowing their planter, thus: 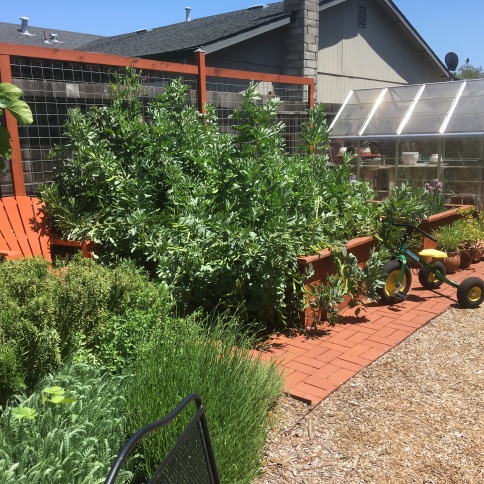 But by the time I got to picking them, they had grown a few more inches and were  getting infested with insects and maybe disease, and were just a mess generally. Here are a few shots showing how the project developed over the day. By the evening I was sitting under the wisteria shelling the creamy green beans out of their pods, which I dropped on to the patio at my feet. Just the plants and the pods of these Vicia faba — also known as broad beans or horse beans — filled most of my own large green waste bin. 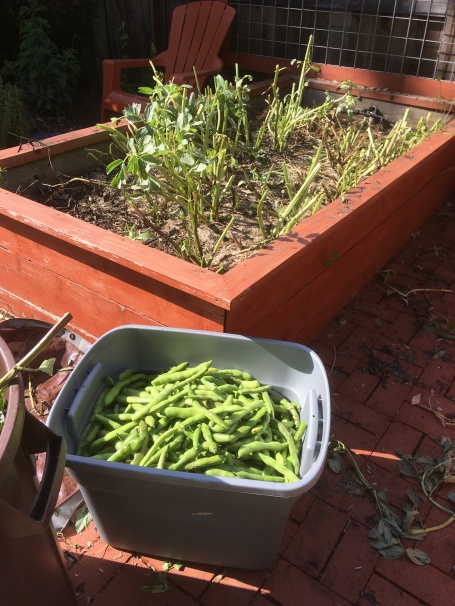 It was slow going, but I shelled a couple of quarts of beans. That didn’t make much of a dent in the tubful, and I needed to do some other kinds of work still before bed; the thought occurred to me that I could offer them on a county freesharing Facebook group I belong to, so I took pictures and posted them, and this morning  a woman came and took half of the remainder. Tomorrow another member is coming and maybe she will clean me out. I could eat all the beans myself eventually, but I have so many things needing doing right now besides shelling favas… like cooking the ones I did shell!

While I was waiting for the lady I thought I’d do a little deadheading – ha! I ended up spending hours on the front garden, yanking out the poppies that want to cover every other plant, shearing one wallflower bush, cleaning up the irises, weeding. Oh, yes, and taking pictures of pretty flower pairings, or trios, and the asparagus in its ferny state with Johnny Jump-ups. I dragged the neighbor’s can over to my driveway and started piling in the green and flowery trimmings. 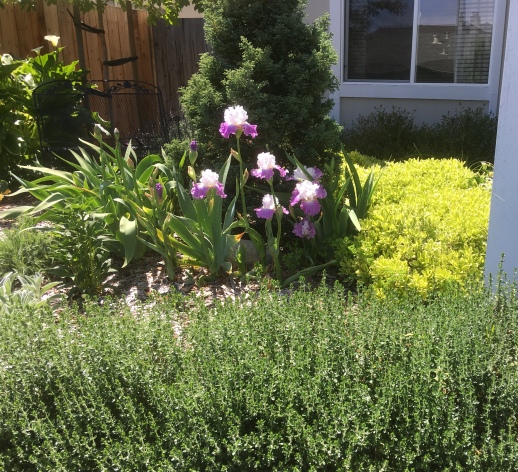 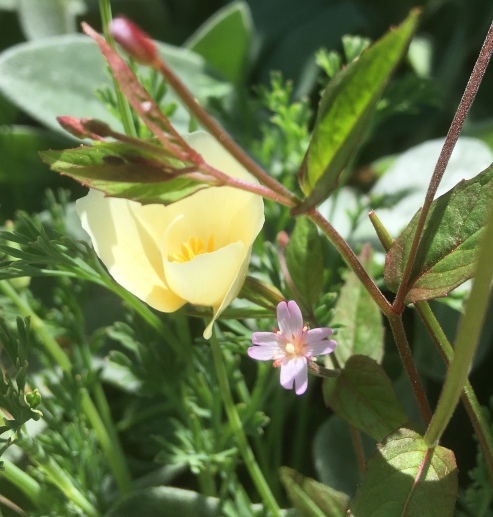 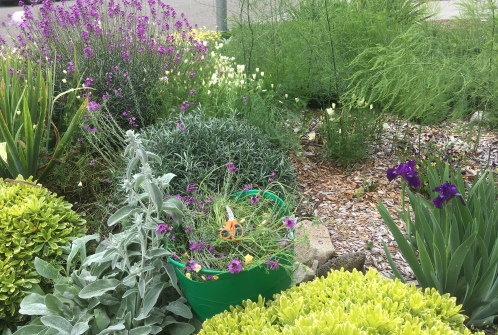 A Painted Lady butterfly was drinking at the chive flowers, and making me think that she was showing off for the camera. Unlike most butterflies, she did not flutter away as I drew near, but did pirouettes, and flew from bloom to bloom striking different poses. Perhaps the strong drink was making her lose all inhibitions. All the while I slowly came closer…  and then she came closer to me, spread her wings on the flower right in front of me and let me watch and admire her at her work. 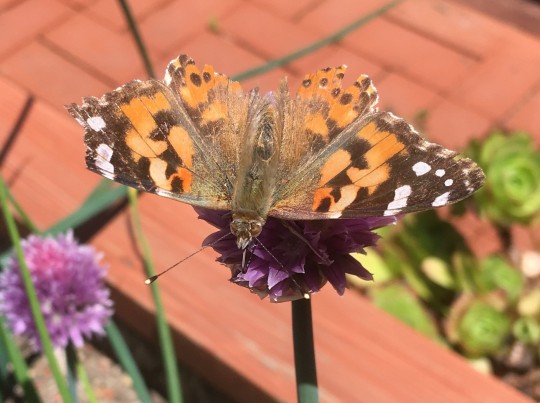 Her wings are a bit tattered, I can see now in the closeups. I wonder if a bird tried to make lunch out of her… Speaking of birds, I think I may have made friends with a certain chickadee. I will tell you about him later; right now I have to head to rest and sleep so that I can tackle more garden tasks tomorrow. 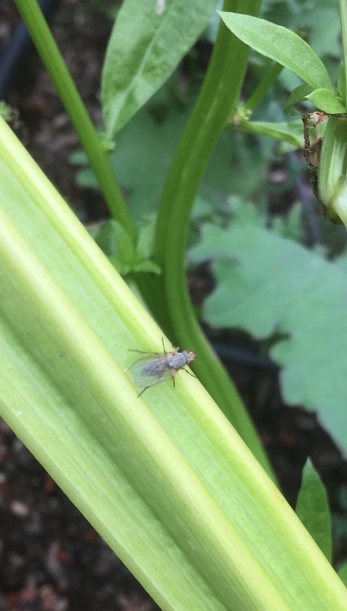 Bringing up Bébé by Pamela Druckerman

Life in the Garden by Penelope Lively

From and Low and Quiet Sea by Donal Ryan