Daily I expect to be murdered or betrayed
or reduced to slavery if the occasion arises.
But I fear nothing, because of the promises of heaven.

“What shall I say about the belly, the queen of the passions? If you can deaden or half-deaden it, do not relent. It has mastered me, beloved, and I worship it as a slave and vassal, this abettor of the demons and dwelling-place of the passions. Through it we fall and through it –- when it is well-disciplined -– we rise again… always eat too little, never too much. For when the stomach is heavy the intellect is clouded, and you cannot pray resolutely and with purity….

“If you eat too much, repent and try again. Always act like this –- lapsing and recovering again, and always blaming yourself and no one else -– and you will be at peace, wisely converting such lapses into victories, as Scripture says… To eat again after reaching the point of satiety is to open the door of gluttony, through which unchastity comes in.”

“The truly intelligent man pursues one sole objective: to obey and to conform to the God of all. With this single aim in view, he disciplines his soul, and whatever he may encounter in the course of his life, he gives thanks to God for the compass and depth of His providential ordering of all things.

“For it is absurd to be grateful to doctors who give us bitter and unpleasant medicines to cure our bodies, and yet to be ungrateful to God for what appears to us to be harsh, not grasping that all we encounter is for our benefit and in accordance with His  providence. For knowledge of God and faith in Him is the salvation and perfection of the soul.”

We are commemorating St. Anthony today, which prompted me to read a little about him. I learned about this book that looks like basic reading:

“The Life of the famed ascetic Saint Anthony the Great was written by Saint Athanasius of Alexandria. This is the first biography of a saint who was not a martyr, and is considered to be one of the finest of Saint Athanasius’ writings. Saint John Chrysostom recommends that this Life be read by every Christian.”

And one sentence from the story of his life jumped out at me:

“Saint Anthony spent twenty years in complete isolation
and constant struggle with the demons,
and he finally achieved perfect calm.”

Pray for us, Holy Father Anthony! 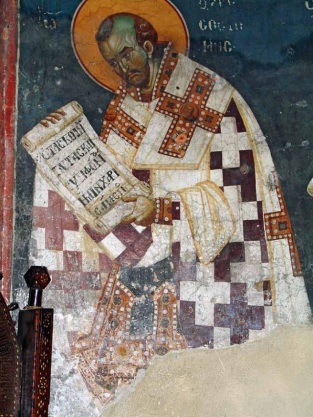 I can think of no Church Father who spoke more forcefully or critically about the moral failings of his time than St. John Chrysostom. He did not hesitate to call out the Emperor, or problems within the larger Church. Eventually, his words brought about his exile. Banished to the very edge of the empire, he died in isolation. Writing to the Deaconness Olympia, his closest friend and confidant, he expressed the very heart of Orthodoxy in troubled times:

“Therefore, do not be cast down, I beseech you. For there is only one thing, Olympia, to fear, only one real temptation, and that is sin. This is the refrain that I keep chanting to you ceaselessly. For everything else is ultimately a fable – whether you speak of plots, or enmities, or deceptions, or slanders, or abuses, or accusations, or confiscations, or banishments, or sharpened swords, or high seas, or war engulfing the entire world. Whichever of these you point to, they are transitory and perishable, and they only affect mortal bodies; they cannot in any way injure the watchful soul. This is why, wishing to express the paltriness of both the good and the bad things of this present life, the blessed Paul stated the matter in one phrase, saying, ‘For the things that are seen are transient’ (2 Cor. 4:18).”

From Fr. Stephen Freeman’s recent post: Into the Heart of the Capitol