The tulips in “my” barrels at church had faded when I returned after my Maryland trip, but the Iceland poppies and violas are putting themselves forward.

In the fall I planted some of these poppies at church, and some at home. The only yellow one I have at home is very bright. These pale yellow ones at church are as big as saucers.

I love this orange-flowered perennial which I did plant well over a year ago, but I don’t remember now what it is.

This particular year’s spring showing is unique, of course. But if I am diligent about watering these containers it will be like every season’s display in colorfully giving glory to God. It is really a lot of fun to be an assistant gardener to the Creator.

When arugula flowers it becomes obvious that it’s a member of the mustard family. We like to call it rocket — that name is easier to say and also hints at how fast it shoots up. This is one of those vegetables that one would do well to plant every three weeks or so, if you want to have some tender young leaves on hand at all times. I made some soup with some tall plants a while back and discovered that the stems get as tough as bamboo when they lengthen out.

It took a lot of oomph to get myself into the garden this afternoon, but when I tested the levels I found that in fact enough oomph had accumulated after two days of rest for me to work for a few hours and fill the yard waste can with weeds and spent blooms.

How could there be so many spent flowers already? Hmm…well, they were blooming when it was raining day after day in March and we didn’t go into the garden much. Then I was gone for ten days, and they bloomed some more!

All the thoughts I’d had about how I’m ready to move to an apartment with no yard, because I hate all the yard mess that I can never keep up with — they all vanished as I dug my trowel and shovel into the dirt and cleaned up around the greens and the flowers. I found three little Johnny Jump-ups that had dropped in near the greens and I tucked them in again and gave them a drink. I found two patches of parsley that look like they have been enjoying the weather immensely.

While I was in Maryland the freesias all bloomed, and Dutch iris came up so that I could cut some for the table. I took out most of the rocket, cut some back, and left a few to wave their petals in the breeze.

In the front yard, my amazing single purple verbena plant is blooming again! It bloomed and bloomed and spread over a square yard and more last summer, and didn’t freeze back. Verbena that I buy in 6-packs is so hard to keep alive, but three 4″ pots of some kind of super verbena that I bought at a good nursery are so vigorous and hardy. The two pink ones are in the back yard and the snails had munched them so I didn’t take their picture. They are blooming valiantly in spite of being defaced.

Certain muscles will be complaining tomorrow, but I did enough today to give me hope for the coming months. And I found a good quote from a 1936 book called Garden Rubbish that encourages me to take care of my garden so that I will like it more:

It is utterly forbidden to be half-hearted about gardening.
You have got to love your garden whether you like it or not.

I’m in Maryland as I write, but I just have to post a couple of pictures of the California scened as it was just before my departure day.

It had been so cold that I was able to enjoy a fire in the wood stove on my birthday — a first! and so rainy, that the Iceland poppies and even ranunculus were always drooping their fragile petals under the weight of water.

Maybe this rainbow was a signal of the end of the rainiest season. It’s lucky I was the one driving the car when we saw it so I could make the decision to stop and shoot. 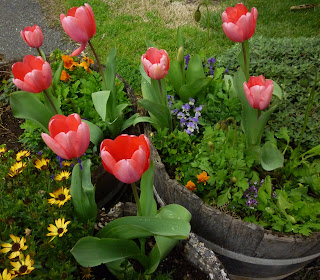 Even in the midst of rain the tulips I’d planted at church last fall seemed better able to hold their heads up. I had forgotten that I’d planted them which made them even more of a joy. They probably will be gone by the time I return, because the weather turned balmy.

Maryland weather also changed since last week. I couldn’t take as many neighborhood walks I was hoping for because we had “wintry mix” of rain, hail, sleet and snow. But on The Lord’s Day it turned, and in spite of thunderstorms last night the temps are in the 70’s today and we went for a long walk.

But to finish up my report of last month, I want to tell you about our new coffee press. We had an old black Bodum something like this; we’d had it for at least 15 years, but I banged it against the bottom of my new sink and broke the spout one night. B. ran over to Target and found a new one for about $20, and I didn’t complain about the fact that it was red and didn’t really go with my new kitchen. It would be in the cupboard most of the time anyway. A few days later B. broke the spout of the new red one ! and I steered us to a different Target where they had more colors, including orange, which fits in better. And now we will both treat our coffee press like fine china.

Monday is a school day for all the grandchildren here, which gives me some time to finish this blog post. I haven’t yet figured out if I can upload pictures to this computer, but there’s not much time left now before I go home, so if I make a report of my family visit here it will probably have to wait until then.

This modern phenomenon of being able to be in Blogland no matter what other spot on the globe one might occupy is really fun!

You can’t tell now, but I did weed my greens patch after New Year’s Day. The rain brought up more weeds, but also the things I planted have grown bigger so that I can make a good soup with them tonight.

The broccoli rabe has gone to flowering and doesn’t taste very good now. I didn’t end up using much of it. Maybe if I plant some this spring it will produce better before going to seed; but I thought it would have been a good fall crop.

Above you can see some Dino Kale and the rabe flower, plus Red Russian Kale on the far right.

And the washed greens ready to go.