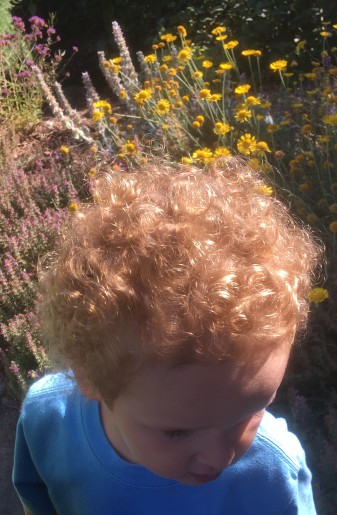 I first titled this post “Melodies of life,” then “Melodies play in my mind…” but then I realized that music is more pervasive than that. My heart is full of melodies today. I mentioned last summer how Kate’s husband Tom would sing about everything; I asked him to make up a song for going to the Indian market and he was on it immediately and with a good will.

Now it’s Raj who sings all day, as long as he is in a happy mood. As the weeks went by and he got used to being in Grandma’s house, his mood gradually improved. But the change when his father returned from extended job training was dramatic. Until then, I think he was intuitively ill at ease, what with his nanny and father both “disappearing” and being replaced with Grandma. Once the family unit was restored he relaxed and became much less reactive. The songs increased.

His mother has created custom eclectic playlists of songs to play for the children, including many from her own childhood, when we had our favorites to sing on trips and before bed, and sometimes around the piano. From being fed throughout his whole short life by both the recorded music and the singing parents, Raj seems to have at his disposal a hundred songs to sing as medleys while he is playing.

He has been allowed to watch toddler videos in Spanish, which I found very educational for myself. When I achieved 500 days in a row in my Duolingo “study” a few weeks ago, I stopped; it just seemed like too much with all the world events demanding my attention. So I’ve enjoyed learning some new words and phrases by means of catchy songs (on “Super Simple” Spanish, YouTube) like “Ponte tus zapatos, zapatos, zapatos…”

At his morning naptime the parents sing to little Rigo, and I could hear them from downstairs, especially when Tom returned and took his turns in a man’s voice. “As I Went Down in the River to Pray,” was reintroduced to my own musical repertoire in this way. Other sweet reminders are “You Are My Sunshine” and “I Feel Like a Morning Star.” These melodies have comforted our souls, especially as we were repeatedly recovering from little boy noise — oh, my! The wild energy is exhausting; I’m glad the parents are young. 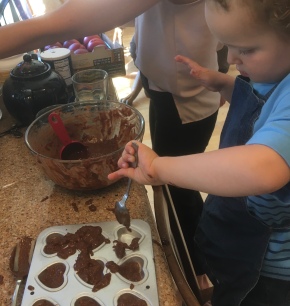 The family departed this morning for their new home and jobs in Panama. It’s the same daughter whom I visited in India two years ago, where I was able to be present when their firstborn arrived. I’m posting a few more stories and pictures before I move on to the next chapter of my life.

One discovery Raj led me to was manzanita berries as food. He found a funny unused plant stand in the greenhouse that he liked to sit on, and one day I found him in there chewing on something from a cup. He had collected manzanita berries from under the bush. I knew that they weren’t toxic, but I had never heard of any human eating them, so I looked them up and found an article about how you can use the unripe berries to make cider, the ripe berries in baked goods; you can even boil the seeds to make “a sophisticated drink.” No joke! 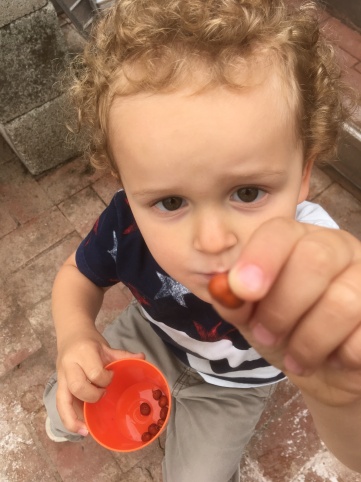 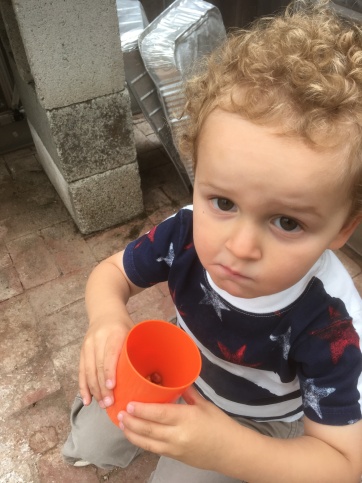 Well, if a toddler was enjoying them, and going back for more, I must sample one myself. I tried several, actually, and they do taste good, but there is not much flesh to taste! You immediately get to the seeds in the middle, which are basically three little stones filling the fruit. I hope I never am so poor that I need to survive on them.

Their last day here, when Tom and Kate were busy packing, Raj had been informed that the trip was imminent. Finally they would go to their new house in that mythical place called Panama, which he’d heard about for several months. He was as cheerful as could be, working from the essential understanding that they would be on an airplane and an adventure again. Finally he had a personal use for the phrase that he’s heard so often in the last year: “You ‘tay here, I be right back!” He told me this many times, as the move was the topic of the day.

And when in my bedroom he found a stuffed llama toy, he thought he’d like to get in my “big red bed” with it, and he snuggled there for at least a half an hour, leaving and returning with books to read, and more stuffed animals, chattering nonstop. He found a basket of Christmas cards and “read” all two dozen of them; I particularly liked this activity!

What will I do, now that it’s quiet here again? I managed to note on paper at least a couple dozen songs that I heard my grandson sing over the last few weeks, and I’ll try to create my own playlist of cheerful tunes to keep filling my house and heart. ❤

Give thanks for all things
On the plucked lute, and likewise
The harp of ten strings.

Have the lifted horn
Greatly blare, and pronounce it
Good to have been born.

Lend the breath of life
To the stops of the sweet flute
Or capering fife,

And tell the deep drum
To make, at the right juncture,
Pandemonium.

Then, in grave relief,
Praise too our sorrows on the
Cello of shared grief. 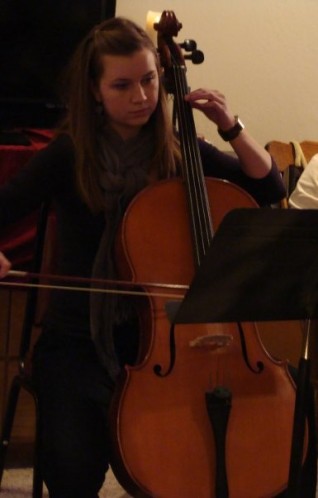 “A thread of sweet sound was spun into the night.” Rose and Richard Quin attend a party at which he charms the hostess in many ways, not least by playing his flute in the summer-house.

“Above us the sweet hollow voice rose and fell, doubled back on itself and glided forward, ubiquitous, tracing a pattern among the stars and another within us, behind our breast-bones,” and Rose finds herself thinking about the boy standing next to her, that if he wished she would marry him, though she had planned up to this point never to marry. “There was no need for an exceptional destiny.”

“My brother’s music was proclaiming that there would be a huge vacuum in the universe, a hole that would swallow all, if we did not fill it with something that the notes defined with a clarity forbidden to words.”

But then she begins to listen to Richard Quin, “with the special knowledge that came of being his sister, and I was astonished by the simplicity of the strangers. They were melting under the influence of a tenderness which they believed to be in his performance, but was not there. They were inventing it because they needed it. The music promised sweetness which was for himself alone. He ached with a desire to be in another place than this, where he would find that sweetness. If he felt concern whether they found this same delight for themselves, it left no trace in the sounds he made. And he felt no such concern; from this and that, over the years, I knew he did not.

“There was this excuse for his indifference, he had already discharged whatever debt he owed to them. He could speak of what they desired and they could not. Without him they would have been voiceless. With him their need pierced the night like the reply to the ray of a star.

“Yet surely that was not quite right, surely one never discharges one’s full debt to other people. But again that cannot be true, if the payment one makes is large enough. I could not work it out.”

on with my blessings has a hard time imagining a home in which children do not hear reading and are not read to, even prenatally. The cadences of ordered meaning should be with

them, in them, and growing from their beginnings to a supernal End. The intuition of number, with which all are born, is, by education, not taught so much as recognized, named, and applied. Combine the intuition of number and the cadence of ordered meaning and one has music. A mother singing a melody to her unborn child is fitting him for greater glories, first perhaps of Mozart and Bach, and finally of heaven, whence all this comes and to which it returns.”