A neighbourhood.
At dusk.

Things are getting ready
to happen
out of sight.

Stars and moths.
And rinds slanting around fruit.

One tree is black.
One window is yellow as butter.

A woman leans down to catch a child
who has run into her arms
this moment. 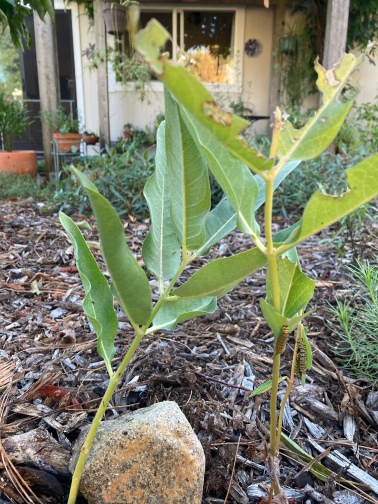 Yesterday I wrote about the dwindling supply of milkweed leaves for my hungry caterpillars, and Linda responded in a comment that they have been known to eat butternut squash in a pinch. I was so grateful for her help, and was ready to go shopping for it and to put cubes of vegetable on sticks for them before I would head out of town.

But when I went out to check on the cats they seemed to have stopped eating, and one of them seemed to be working himself into the hanging J position. They hadn’t eaten all the leaves available. I got quite a surprise to see three more, slightly smaller caterpillars on the pathetic Narrow-Leaf Milkweed plant nearby! Should I also try to rescue them?

Later when I checked again, still none of the six were eating — was that because it was cool and cloudy? — but they had moved and were all stretched out vertically. In case they were going to return to chomping through the leaves, I decided to bring a stem of milkweed over from under the fig tree. There was one with a strange horizontal, shallow root, which pulled up easily. I stuck it in the ground so that its leaves touched the other (healthy) plant; I anchored it with rocks and gave it a good watering. I finished packing the car and drove off.

When I get home again next week you can be sure I will let you know the current state of affairs of what is now a group of six Monarch caterpillars. For now, I want to show you something pretty I noticed on the patio — the white begonia is tall and healthy, much bigger than last year. It’s a pristine, comforting bit of newness when the earth is making its yearly descent into death and decay. 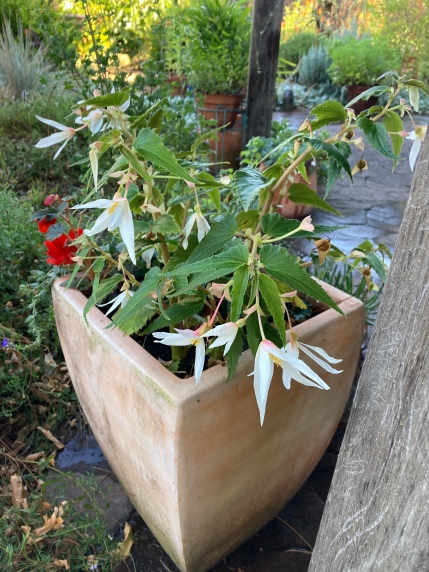 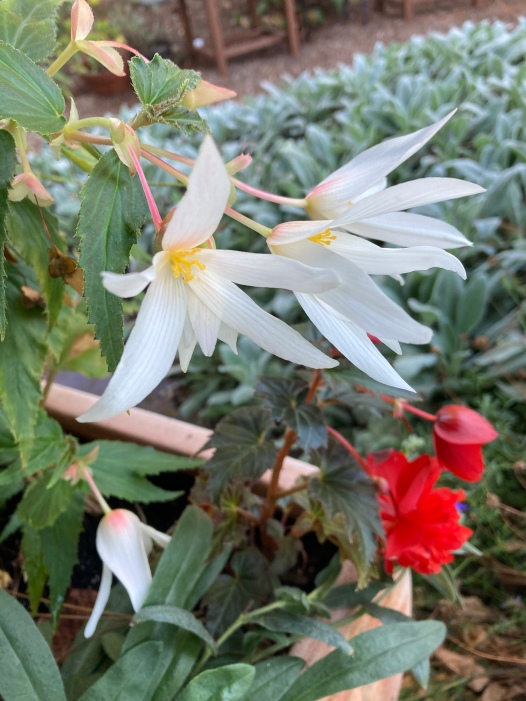 When I was planting the new milkweed species that I’d bought, I saw Monarch caterpillars on the established Showy Milkweed plant! 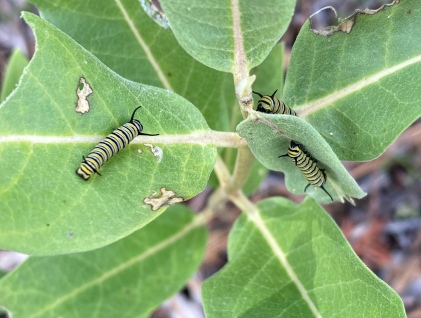 They are still there, three days later. But there is much less of the plant left for them to eat. I notice that this morning two have moved over to the smaller stem. (I wish I could have seen them doing that.) This milkweed is a young start that I moved across the yard from under the fig tree, where the original plant had reproduced dozens more over the years. 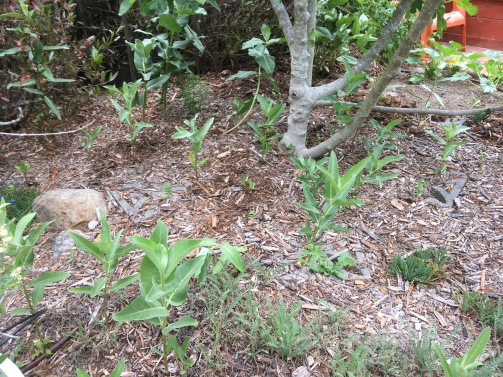 I transplanted it last year, close to the Narrow-Leaf Milkweed, out in the open where the Monarchs might find it. The Showy leaves are large and meaty, and they are what I fed my caterpillars four years ago, even though the eggs had been laid on the Narrow-Leaf. Meanwhile, the fig tree has grown so large, in spite of being a dwarf variety, that it is shading the Showy Milkweed out of existence over there.

The Narrow-Leaf Milkweed is one of the two species native to my region, which is why I planted it originally. It has the most dramatic blooms, like ladies in crowns and pink dresses dancing in formation: 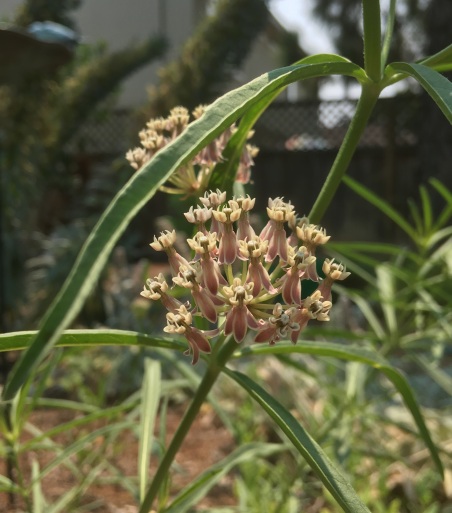 … but as I have said before, there is not enough leaf matter there to make the newborn caterpillars grow big and strong and become butterflies. It was my hope that if I put the Showy type out there, the Mama Monarch would choose it. And she did! But — it is hardly bigger than the new starts I set out. From the bottom of the picture at left:

I know from the past, when I raised and released three butterflies, that they eat a lot. Back then I picked numerous large leaves off the Showy plant — which was huge — to feed them.

These three have already eaten half of the plant, and they have a lot more growing to do: 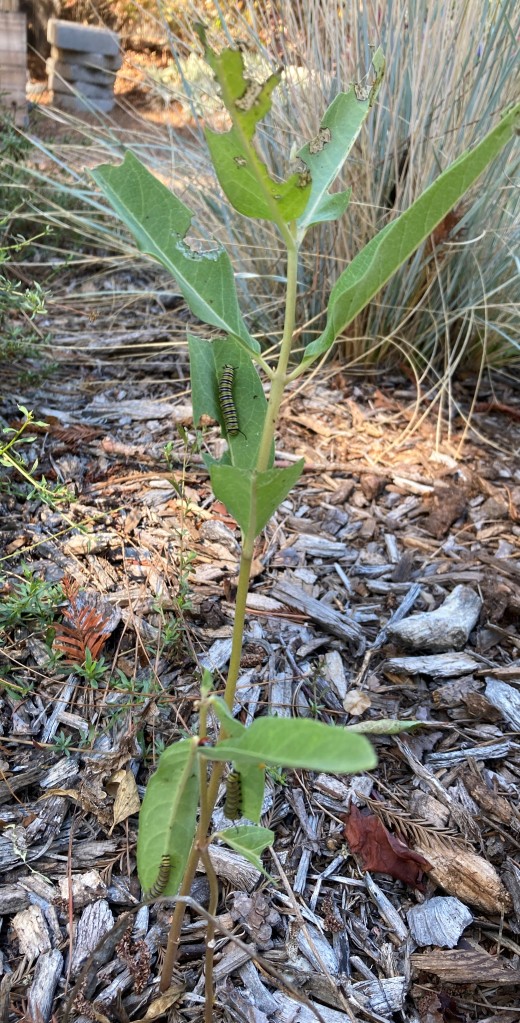 When I return from my trip north, I’m afraid that they will have eaten every last leaf, and then starved to death. Should I take them with me, and feed them? But feed them what? I only have two spindly Showy plants growing under the fig tree currently. What if I were to lay them on the ground under the one being eaten right now, making a path to the new starts? Do I really want them to possibly defoliate those, too, when they have barely begun? After that truly thrilling Monarch Project I undertook I decided once was enough. Bearing responsibility for caterpillars was too much work. And physically exhausting for other reasons! So… I think I will have to let nature take its course.

It might be that the smallish Showy Milkweed just wants a tiny bit more water to help Nature along, and then that course might result in this kind of Show next summer:

If so, there will be plenty of food for all caterpillar comers.

“For seasonable weather and the abundance of the fruits of the earth
and for peaceful times let us pray to the Lord.”
-Litany of Peace 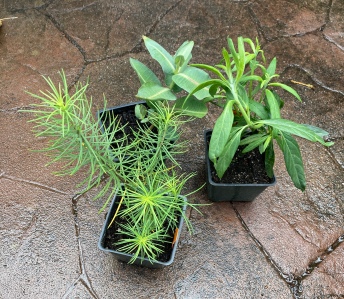 Hours of rain. LOTS of raindrops. Glory to God! All the plants and humans around here are happy.

A couple of days before the rain came, I received in the mail three new plants, three species of milkweed that I haven’t had before: Asclepias glaucescens, Asclepias linaria, and Asclepias physocarpa “Family Jewels.” I set them out on the patio to get watered quite naturally. If they bloom next summer I’ll show you pictures.

Also not long before the watering, I got around to dividing the irises. The poor things had sat on the driveway during the heat wave, while I was in the mountains. But they were in such thick clumps with lots of dirt surrounding, they didn’t seem to have suffered much. And I ended up with dozens of extra rhizomes that I have been giving away. 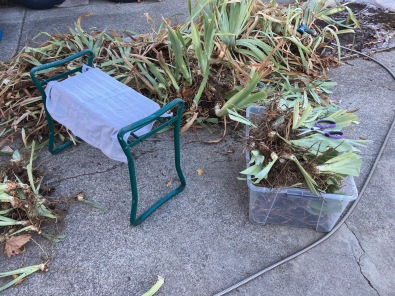 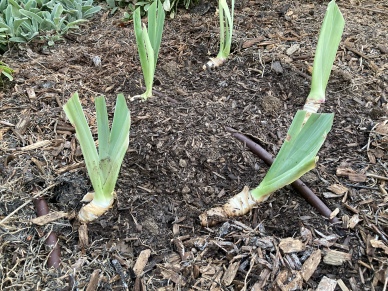 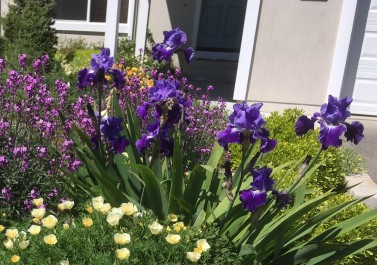 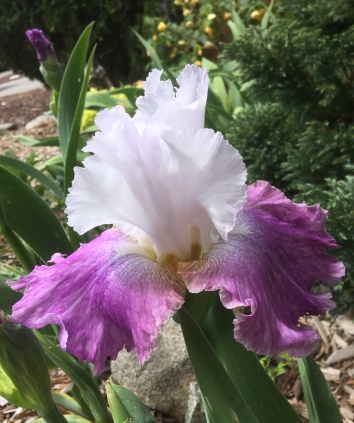 Unfortunately I forgot that I had two colors in those three clumps, and I mixed them all up while I was sorting, but the people who are getting them don’t seem to mind. At least they are both purple; these pictures are from past years. And I am thrilled to think of how all these other friends’ gardens will be further beautified with my “children.” 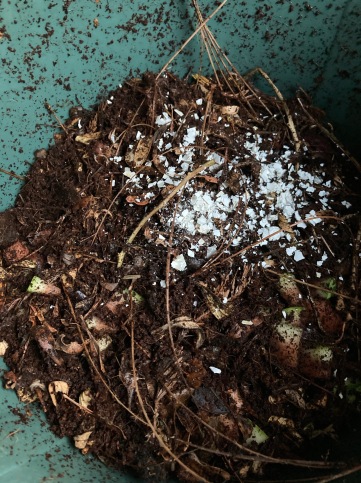 This last picture is of the bedding material I’ve mixed up special for the worms I am getting tomorrow, to start my vermiculture project. I’ve been wanting to do this for years, and step by step I managed all the parts of the preparation, after watching a couple dozen videos on YouTube and reading in the classic book on the topic, Worms Eat my Garbage. A friend who is a long time worm farmer is giving me my starter worms.

What could be better on a rainy Sunday afternoon than taking a nap? Well, on this particular one, for me at least nothing was better, especially because this week is extra busy from the start. Normally I try to reserve Mondays for catching up and re-ordering my mind and living space, but that’s not an option this week. So — I need to work on all that before I go to bed again.

This week Autumn officially arrives!
But in honor of worms, I give you a somewhat Spring-y poem:

When the earth is turned in spring
The worms are fat as anything.

And birds come flying all around
To eat the worms right off the ground.

And once, when I was very young,
I put a worm right on my tongue.

I didn’t like the taste a bit,
And so I didn’t swallow it.

But oh, it makes my Mother squirm
Because she thinks I ate that worm!