Because of the strange and wonderful arrangement of me having two housemates to share my big house, my kitchen is a warmer and livelier place than it would be otherwise. Kit has her favorite mugs and her red teapot that she frequently fills, and a collection of tea that has swelled my original holdings to bursting. 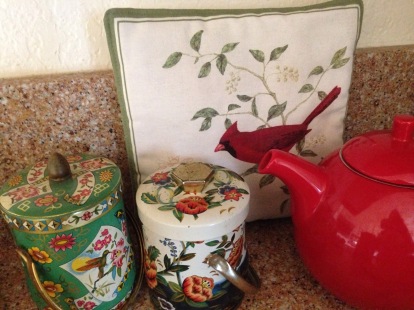 The tins are mine, special because they used to sit on my grandma’s kitchen shelf. I don’t remember what she kept in them, but I keep tea.

Mrs. Bread gave me a cape violet, which has blooming offspring now, b

ut this flower is on the original plant, which is not a frequent bloomer for me, but because of that each flower is even more exquisite and precious. Every kitchen should contain something growing, and at least occasionally blooming, don’t you think?

We women all like to cook (though I must admit to cooking much less than I find myself eating what Kit cooks), and Susan seems to like to clean up — at least, she does it a lot. One thing I made recently didn’t require cooking: a vegan chia seed pudding which I found on Minimalist Baker. I’ve made it twice, and the second time I also created a pumpkin-spice version that has yet to be perfected. We really like the chocolate one, but variety is nice.

While concocting these nice jars of breakfast or anytime-food, I used measuring spoons from different sets, and noticed a discrepancy in the size of the half-teaspoons.

The one on the right above is Oneida brand, and it is almost a whole teaspoon, as I found out with the a

id of a medicine cup. The one on the left is new and relatively inexpensive, and it seems to be just right, while the one in back is probably a hundred years old, and it seems to be a little less than a half-teaspoon. I often have wondered if the really old measuring spoons have had their edges worn down over the decades…. But what am I to think of this overall lack of standardization?

Kit says she has been semi-consciously avoiding that bigger spoon when she needs a half-teaspoon, and now we know why it — it isn’t what it purports to be! Are even our measurements getting supersized? 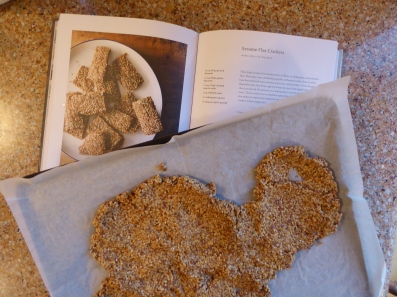 We seem to be focusing on brown and orange foods lately. The chocolate pudding is brown, of course. And the light and crispy sesame flax crackers that we’ve made three batches of. That recipe comes from a library book, Food 52: Vegan by Gena Hamshaw. Moving on toward orange, Kit made carrot-ginger soup with cashew cream for a topping.

But for sheer elegance, I present one of my favorite foods, whose presence in the kitchen is to me always either promising or comforting. It takes so little effort to cook, and is versatile and healthy. It is what I call a yam. If you do a little research on what is a yam and what is a sweet potato, you might go a little crazy with the impossibility of being both botanically correct and a non-weird member of your local culinary culture.

So, my recommendation is to just call it what you always call it. I love all the sweet potatoes I’ve ever cooked and eaten, but for some reason I buy this Garnet Yam more often. Here is the last piece of yam from the recent batch I baked. It’s time to put a few more into the oven, to make this rainy day warm and nourishing.

11 thoughts on “In the Glad kitchen.”