“There was an actress who wore a white dress with a circle cut in it just above her navel so that her skin could be seen, which looked very pink. Against the white, it was as if she had dropped a slice of ham on her lap; but it showed good feeling and willingness to think out new ways of pleasing.”

The actress appears at a party in New York, in the last pages of Cousin Rosamund by Rebecca West. At the end of the third novel in the Aubrey Trilogy, Rose is talking about her visit with her sister Mary to the United States during the Great Depression; West herself did visit many times, not as a musician but as a journalist and author. What she does in these books I think of as the best kind of historical fiction, the autobiographical kind; when I do my time travel I like to go about with a friend who knows the places and people well, who is observant, analytical, and attentive to every detail.

“Since the crash in America Mary and I were not offered nearly such good tours… but we could not keep away, and we felt a longing… to be with our friends again. They were so friendly and they were so violently engaged in life; being with them was like getting on a toboggan behind somebody one liked, putting one’s arms round them, and dashing off downhill over the spurting snow.”

“On the boat the American passengers told us stories of ruin, but with an upward, hopeful inflection that made them hard to consider: it was as if we were trying to look into the eyes of someone who wore brightly polished spectacles.”

“…these people spoke always of general ruin, which had not touched them yet but must, of this paralysis, spread further. They spoke too of prescriptions to end it, and showed themselves naked and newborn in their innocence, as unaware that blood ran in their bodies as they were of bandages and tourniquets. 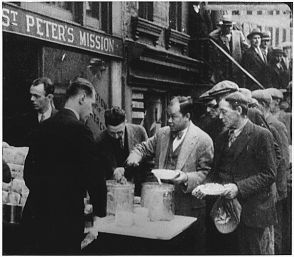 “’They are like us when Papa went away,’ said Mary, as we drove home. ‘Do you remember how we talked about going into factories, we did not know which, and making enough to keep the house going?’

“’They are like us in other ways,’ I said. ‘They speak of the stock market as something that has an independent existence and sometimes gave them lots of money. It was their father, they are like us, they are gambled children.’”

4 thoughts on “Dashing off downhill.”