If I had procrastinated just a little longer this evening, I’d have missed a great blessing. As it was, I had just enough minutes to take a walk and make it back before dark. I wished I had given myself time to drive somewhere different, but I did take a slightly different route. What I saw made me thankful in the end about all the timing.

As I set out I was recalling how I wanted to share pictures of the lemon curd I made last week. The color is so gorgeous, not just Lemon Yellow but Lemon and Egg Yellow. I’m not a fan of yellow for decorating my house or my self, but when I had just got my driver’s license as a teenager, I thought I’d like to have a yellow pick-up.

That idea must have been a response to discussion about such things among my friends; I can’t imagine that I was dreaming or scheming  on my own initiative, as I don’t seem to have a (good or bad) ambitious bone in my body. I know I never tried in any way to get a vehicle. This evening, musing on my lack of yellow clothing, I emerged from the redwood grove at a street to see a yellow pick-up. I have to say, the one I “wanted” was older and rounder, but just about that color. 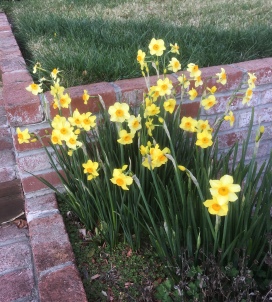 That was fun. I walked and walked and found blue and purple things to take pictures of. Lovely rosemary, and a too-blue house, that was trying to be a flag. Yellow, too, narcissus of a form that always pleases me when I see it at this time of year.

I ended up on the bridge over the creek close to my house, and there a man with a camera spoke to me; he wanted to talk with someone about the kingfishers he has been trying to photograph for six years. I have been walking along this creek for 25 years and I didn’t know we had kingfishers. He said there was an otter in the creek lower down a couple of years ago, too.

I mentioned the bald eagles I’d seen; he had not had that experience. And he said I certainly would have heard the kingfishers, they make such a racket as they fly just above the water, very fast. Would I have forgotten that? Of course it’s possible. I’m still surprised, though not incredulous, at what I have forgotten. The man was kind enough to introduce himself to me and shake hands, and he and I walked in the same direction down the path, talking about good places to see birds, and good hikes to take.

And then, a great commotion, there they were, tearing down the creek chan 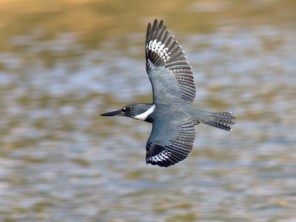 nel behind the trees, not stopping to have their picture taken. So noisy! You probably all know their sound already but if not, you can listen here. About three minutes later, back they came just as loud and fast, but this time I glimpsed a flash of blue.

I was so happy to see that Mary Oliver wrote a poem about the kingfisher, because that wild creature may remain a phantom blue noise for me for a while to come, but — there was a sighting!

The kingfisher rises out of the black wave
like a blue flower, in his beak
he carries a silver leaf. I think this is
the prettiest world — so long as you don’t mind
a little dying, how could there be a day in your whole life
that doesn’t have its splash of happiness?
There are more fish than there are leaves
There are more fish than there are leaves
on a thousand trees, and anyway the kingfisher
wasn’t born to think about it, or anything else.
When the wave snaps shut over his blue head, the water
remains water–hunger is the only story
he has ever heard in his life that he could believe.
I don’t say he’s right. Neither
do I say he’s wrong. Religiously he swallows the silver leaf
with its broken red river, and with a rough and easy cry
I couldn’t rouse out of my thoughtful body
if my life depended on it, he swings back
over the bright sea to do the same thing, to do it
(as I long to do something, anything) perfectly.

21 thoughts on “The evening’s excitement was blue.”