My parish has a team of bakers who prepare not only the loaves that eventually go into the cup of Holy Communion, but two other forms used in other ways in the services. There are several people who take turns making the dough in the church kitchen early in the morning on baking days, and different people who finish the process, shaping, baking, bagging and finally storing the loaves in a freezer. These top two pictures are of some exemplary loaves we’ve made recently.

This morning I was on the baking team, and when I turned the dough out of its big stainless steel bowl and began to handle it, right away it seemed to me that it had already been kneaded too much. Those of you who make bread know 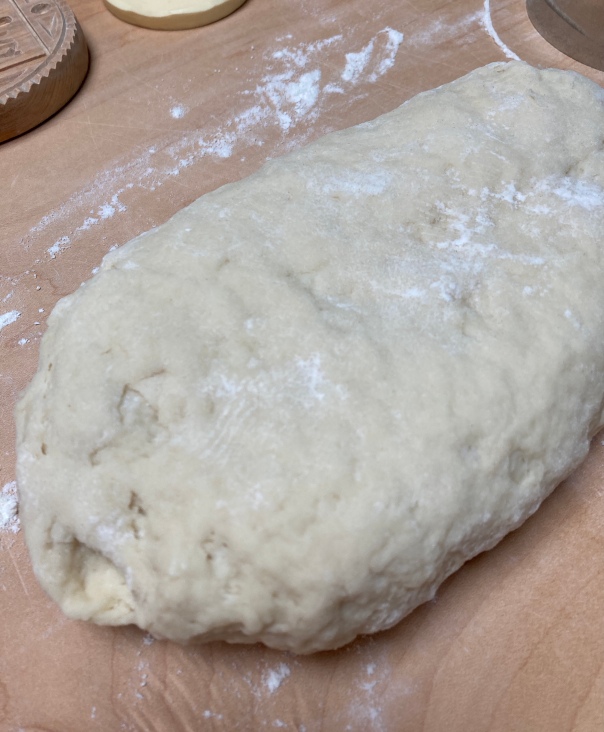 that kneading develops the gluten and makes the dough stretchy; but did you know that if you go on working the dough too long, the molecules of gluten get damaged, and there is no repairing them? The dough begins to tear instead of stretching, and the resulting loaves do not look smooth but rather lumpy.

I don’t recall how the texture of the baked bread is affected by this problem. I read that the loaves will be heavy and dense, but my finished loaves didn’t seem to be much smaller than usual; we don’t sample them, but we can get reports from the priest as to the quality when he cuts it in the altar, and I will be sure to do that next week.

When I was finished with baking for the morning, it was lunchtime, and I stayed on the property to eat the food I had brought to sustain me during the afternoon when I needed to run several more errands. The air was cool and still; I sat at a table in the garden and read the story of St. Gabriel of Georgia who was commemorated today.

I admired the layout of the fruit trees and ground cover that have replaced the lawn. Roses and other flowers had been drizzled on for a few days and were sparkly, especially when the sun came out from behind the clouds, just as I was leaving. 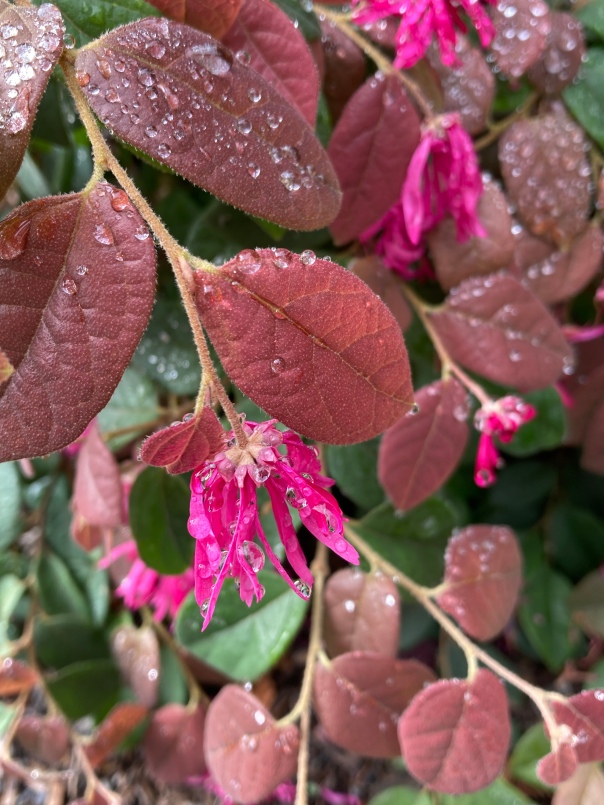 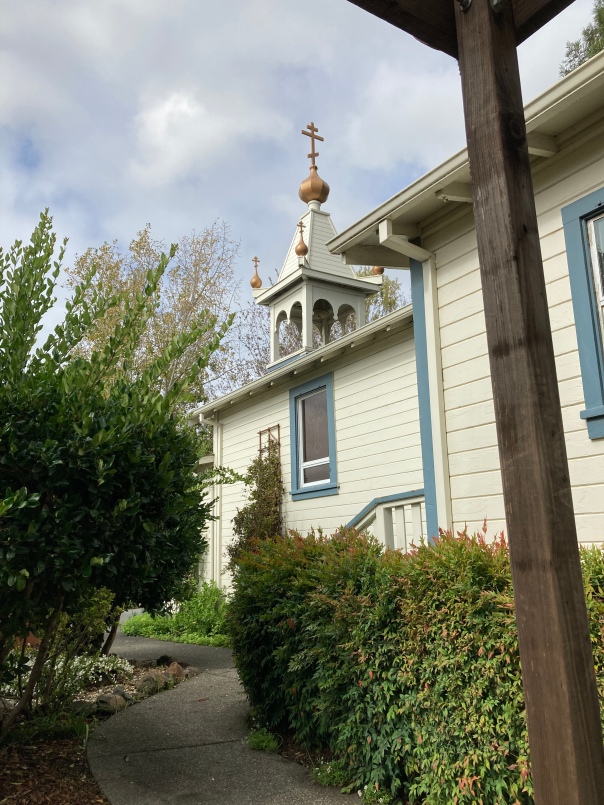 Two of my afternoon stops were at friends’ houses. First my godmother, who with her husband plants a huge garden every year, and they wanted to share their harvest of pie pumpkins, since I didn’t manage to get any from my own garden this year. If it hadn’t been so muddy from the heavy rains we got, I’d have wanted to walk up and down the rows there, because I know it smelled good; instead, I stood gazing out over the landscape of soggy tomatoes fallen from their vines, spied the remains of the pumpkin patch in the distance (all the fruits had been removed), and passed through a field of tiny green blades of freesia sprouts.

From there, I drove west to where my friends Mr. and Mrs. Bread live and keep a charming homestead that my late husband used to say evoked a French country garden. Mrs. Bread and I have traded many plants over the years, sometimes things that we have grown or propagated ourselves. Lately she has grown apricot trees from pits, and she gave me one of those, and a Meyer lemon tree she started!

I feel lucky that the trees do not need to go into the ground soon, though one of them might benefit from a larger pot. The fact is, it will be a squeeze to fit them in here, but I know I can do it if I have a year to figure out the puzzle challenge. I’ll have to show you a picture of my new little trees later; it’s dark now, and my day is coming to an end. It was a little bit of commercial, but that was of relatively little interest. The agricultural and culinary aspects of the day were the fun and satisfying parts — and I was glad for the hagiographical introduction to Fool-for-Christ Gabriel, too. Glory to God for all things!

12 thoughts on “Mostly agricultural and culinary.”

Out of the Silent Planet by C.S. Lewis