If any one rock expresses for me the metaphor the Psalmist uses in words like this (Psalm 18): “The LORD is my rock, and my fortress, and my deliverer; my God, my strength, in whom I will trust; my buckler, and the horn of my salvation, and my high tower,” it is El Capitan in Yosemite National Park. Contemplation of this edifice over time probably contributed to my love for rock and stone. It may seem odd, or lazy, that I’ve never made the effort to study geology or petrology. All I do is stare at the big rocks and collect some pretty little rocks. The latter are good to put on the soil around succulents and keep the roots warm.

To be truthful, I collect some medium-sized stones as well and haul them down from the mountains on occasion, with the help of stronger and less enthusiastic members of the family. Granite. These are not only reminders of larger hunks of granite, such as El Capitan, but they are very useful in the garden, for beautifying generally, adding another texture and color to contrast with leaves and flowers, or the colors of the cats who sit on them. In some places they also prevent cats from engaging in other less desirable activities.

The Southwest, where we have recently traveled, is a delight to rock lovers, even the ignorant type like me. The stone there is typically redder than in Yosemite. Above is a shot from the Grand Canyon.

But in Monument Valley I was thrilled at aqua blue rock faces gorgeously setting off the mostly red cliffs. As we climbed out of the car and hiked in among giant boulders and hills of rock, I looked forward to taking their pictures.

Unfortunately, we were in the middle of a sandstorm, which made it unsafe to use one’s camera. My companions said, “What are you talking about? There is no blue rock here!” And when I got close to these piles of brilliant color and picked up some of the chips of sandstone, it wasn’t bright at all, but sort of grayish-white.

This photo I risked (above, with a man behind it) shows the bluest rock I saw–as it looks to normal people. I am still puzzled as to what was going on that day. If the rocks were reflecting the blue sky, why didn’t the others see that? Did I have blue sand in my eyes? 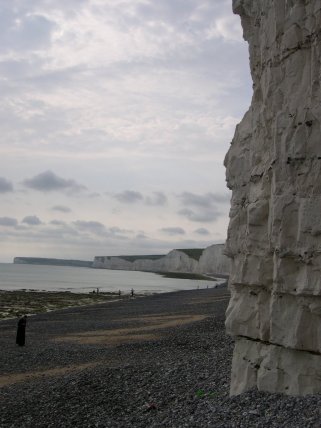 In England and Scotland several years ago I collected small stones that wouldn’t weigh me down too much on the return flight. Here is a photo of the first place where I couldn’t help myself, where the chalk cliffs on the southeast coast of England meet the sea. I am the dark shape bending down to hunt and peck along the shore. >>

Also while in England, we visited several stone circles. Just being near these stones and thinking about the people who mysteriously erected them makes me praise God for creating humans with a desire to know the Absolute and numinous, people who are not content to live a life that is merely earthly. History is full of evidence of God’s working in men’s hearts, and I am linked with these people because we have all sought God. 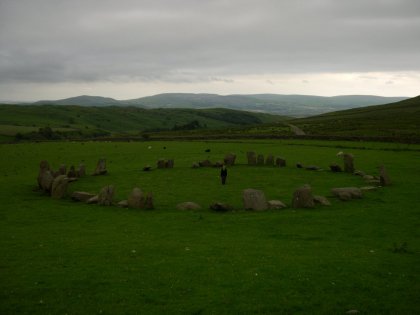 The standing stones above are in Swinside. I much preferred just meandering in the historically rich countryside, soaking up….something, to visiting “museums” full of print-heavy posters that were too much like dull textbooks.

Stone fences and walls abound in Britain, including portions of the famous Hadrian’s Wall and its forts, leftover from the Romans in the 2nd Century A.D. We liked hiking alongside it for a couple of miles (below). 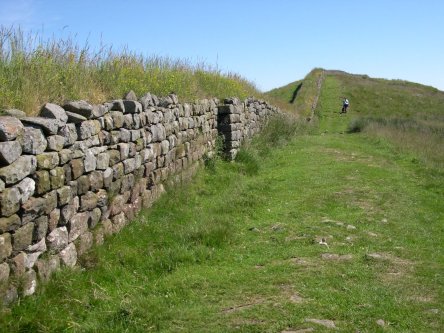 I started out talking about the greatest, and will end this post with photos of the smallest,

the collection of specimens I brought back from Britain–one group from Beachy Head in England, and three gatherings from Scotland. The plain white one from Beachy Head is pure chalk. The black cores of the other white rocks are a kind of obsidian. Beyond that I am pretty ignorant. If you click on one of the photos it will enlarge so you can see the stones more closely. I bet you’re not surprised that I could find a stone embedded with a cross.

4 thoughts on “Rocks and Stones”