I came home yesterday so that I could make it to Pentecost. Vigil last night was wonderful, of course. But today I am sick and had to miss the feast. Being kept at home has given me a chance to put up some photos and share the sights of my drive.

While still on the flats I saw acres of alliums under a sky as white as their flowers, with drops of rain starting to fall out of it. They are onions, yes?

After it began to rain in earnest I noticed the yellow lupines covering the hillsides, where blue and purple ones had been last month. I had to hold the umbrella over my camera to get these photos which show the flowers fuzzed-out by the effects of wind as well as waterlogging.

Only three minutes to snap my pictures, but ten to try scraping my shoes of the mud they’d easily picked up on the side of the road, enough to throw a large vase. 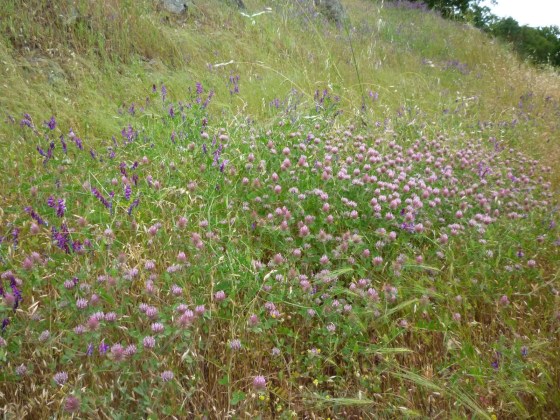 Farther down the road clover and vetch are in flower together.
That soil should hold plenty of nitrogen!

On the home front, the amount of rain we’ve had so late in the spring has made a big difference in the landscape. The roses are huge, and the old seeds I threw into the ground without much hope sprouted quickly and are growing fast. Natural sprinkling is more effective than me holding a hose. The temperatures have been low, with wind, too, so mildew hasn’t been a problem.

I never feel right complaining about wet weather in California, seeing as we grow so much of the nation’s fruits and vegetables on land that doesn’t get rain for several months of the year. Even if we got several years like this, it wouldn’t change the basic arid climate. Every refreshing shower postpones this summer’s inevitable drought.