“Mmm-mmm, star thistle and tarweed — the scents of fall!” That’s what my daughter Pippin said as we started out from the trailhead on our latest outing together. Every time I am outdoors with her I learn something new. I should say, I don’t remember being introduced to tarweed  before, and that feels as exciting as brand new.

Pippin and the Professor had come from their home in more northern California for the weekend. Saturday we hung around my neighborhood in the morning, and went afield in the afternoon.

Ivy adopted the doll Madeleine for the day and took her out to gather strawberry tree fruit. Scout dissected the ripest-looking dwarf pomegranate, and we decided it was almost sweet enough to be worth the bother. We walked along the creek path to the playground at the park, but probably the “playground” on the way was the most fun. In two places kids had hung rigging from big trees, from which you could swing out into the space where the ground fell away steeply toward the creek channel. Pippin was the only one with the strength and length to hoist herself up on to what seemed to be a launching platform. Jamie tried to be patient, but reminded us, “Let’s go, to the park!”

Our destination in the afternoon was a giant California bay laurel tree that may be the largest of its species. I had visited this particular tree at least twice before, but probably not since the 80’s.

Our short walk up the hill stretched out, as we stopped to observe lichens and poison oak, the tarweed and star thistle. Two of us had painful feet that slowed us down. We saw a wild buckwheat, Eriogonum, taller and bushier than the species we were familiar with. From my reading today I think it might be California Buckwheat. But as you can probably guess, the first photos below are of star thistle, a plant you never want to have to break a trail through.

Eventually we came out of the woods onto the grassy hilltop where lots of cows were grazing with their calves, and bellowing almost without stopping. There was The Tree on the horizon, and a smaller companion alongside.

Umbellularia californica is the only species in its genus, in Oregon known as the Oregon myrtle. It’s been called by several other names including pepperwood and balm of heaven. The flavor of its leaves is similar to the true bay leaves from Laurus nobilis, only stronger, and most of my life I’ve used leaves from the abundant local “bay” trees in cooking. For a long time I didn’t know they were not the real thing. The map shows its natural range. 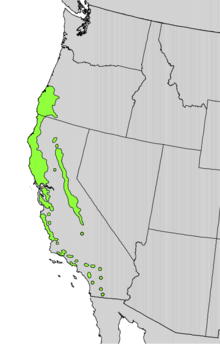 I hadn’t read that nickname “balm of heaven” before our outing, but standing under the massive canopy with thousands and thousands of leaves exuding their aromatic oil, I definitely felt the olfactory presence as a balm, its scent filling my nostrils as hugely as its image filled my vision.

The children right away began to climb, and to stake out their “houses” in the several neighborhoods that have been formed under branches as thick as big tree trunks, some of them weighing themselves down horizontal with the ground. The adults took pictures of the wide views of the landscape below. Pippin and I studied the tree’s flowers, trying to figure out where they are in their bloom cycle. If it hadn’t been late in the day it would have been the perfect place to have a picnic and linger a while.

In the last few years I’ve been buying the few bay leaves I need. But I brought home a handful of the mega-flavored, special California-and-Oregon pepperwood/balm of heaven leaves, and will simmer them in a winter soup. When I get a whiff of their essence in the steam that rises from my bowl, it will keep me connected to that magnificent tree until I can get back for a longer visit.

4 thoughts on “The balm of thistles and a mighty tree.”