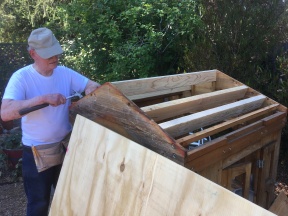 Last month a man I barely know came into town and put a new roof on my playhouse. It’s a long story involving his grief and pain, and it was a long week while he was in town, but all in all it seems to have been a good thing for him who has been a carpenter his whole life to have this familiar but minor project to focus on.

When I bought the playhouse on Craigslist four years ago I think the red plastic roof may have been freshly painted by the previous owner; after the first winter it was peeling, and two more repaintings have also not lasted. For a long time I’ve planned to replace the plastic roof with something paintable, but couldn’t find the right person to help me, someone with the vision and the know-how and the time. 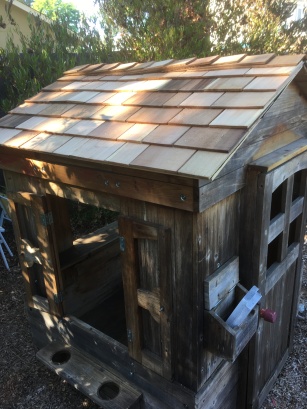 Carpenter Friend heard about my remodel and didn’t understand that I already have a team of younger people for that project; when he arrived from Idaho with his tools I pointed him toward the playhouse, and within a few days he had put on a real roof. He was going to paint it, too, but I could tell he was ready to move on, so I did that part myself.

This all happened at the perfect time, because somehow I was mostly available for that week, to listen to the stories from a long life, and to admire the work. Also, I am going to replant my matching strawberry barrels this fall, and will put a coat of the same color on them before I do. There’s a little trim piece that is supposed to go on the front of the playhouse, and which I haven’t yet figured out how to adapt without plastic. So the area above the door looks a bit plain still. 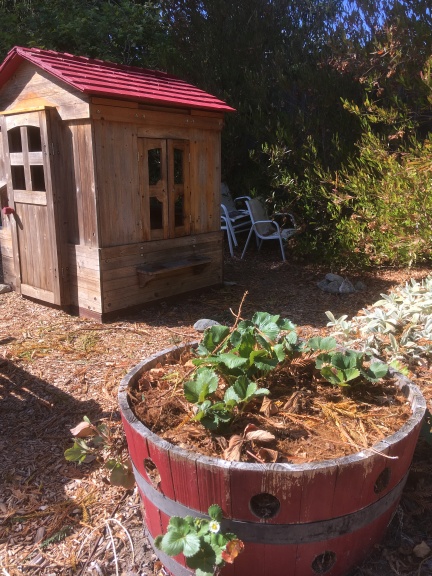 This month I want to put a coat of sealer on the rest of the playhouse, and then it will be ready for winter. After a cold snap that was a warning call, the weather has been milder again, but I don’t think we’ll be having the windows wide open anymore — 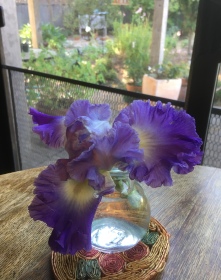 the night breezes are too chill. The sunflowers continue in their enthusiastic blooming behavior, and the repeating irises never stop! I accidentally broke one off today so it is in the house.

High winds brought in the cooler temps, and blew bushels of redwood twigs cascading down from the tree behind me. You can see them all over the place in the photo above. I haven’t had the energy or time to rake them up.

It was because of their mess I had the little broom out where the Oregon junco could pose near it. Of course 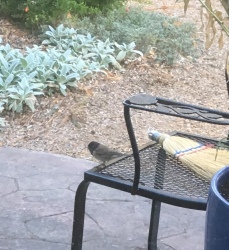 he didn’t pose – he and his friend only hopped about on the patio and this is as close as I could get to them, through the window in my kitchen and family room. Yesterday I gave up getting a picture at that distance, and began to look for pictures online, but they were not my juncos; this morning I managed to get (fuzzy) images that are much as I usually see them, with their signature little black caps being the most distinctive feature for sure. My husband first told me who they were, long ago, and it’s always exciting when they arrive in the garden and hang around the neighborhood for months. 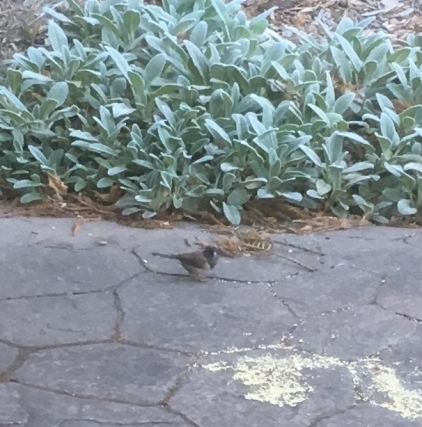 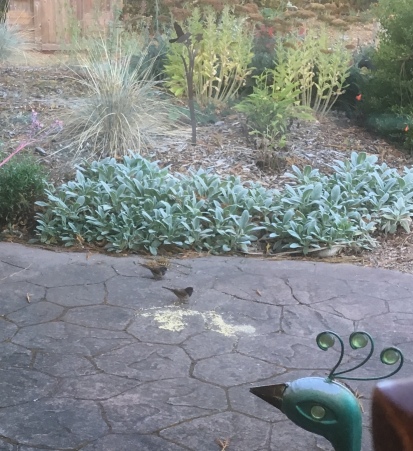 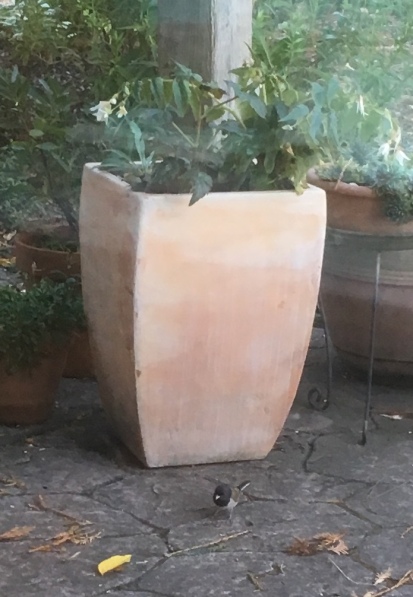 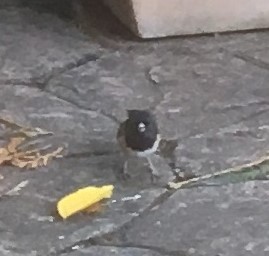 Bit by bit little things are done toward the remodeling. Lots of demolition, and bags and bags of old ceiling and sheet 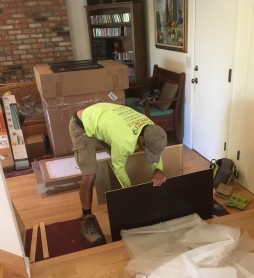 rock are collecting in my utility yard, for the construction guys to carry off, soon I hope: that’s where I want to put the firewood I am waiting to order. But the area in front of my wood stove is currently taken by bathroom vanity parts ready to be installed. Here is one picture of actual construction going on, but it is only a small cabinet that needed assembling.

The fig harvest continues gloriously. I’m giving them away, and finding recipes that I can use to turn them into something freezable to use later. This picture below is of Honey Fried Figs, a simple sauteing in butter and honey, which makes a kind of preserve to serve on its own or as a topping for ice cream. 🙂 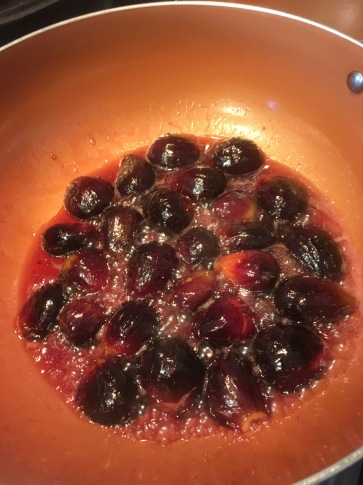 I also have my cook’s eye on a Martha Stewart fig cake. I did try a fig clafoutis but it did not please the palate, however pretty it looked just out of the oven. 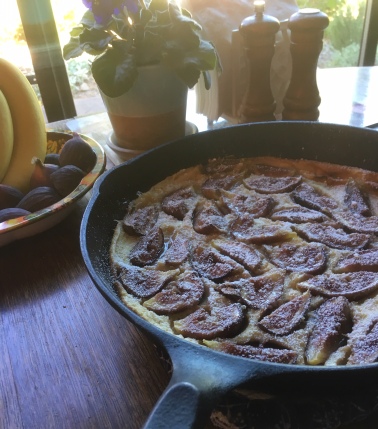 My gardener’s eye will have plenty to keep it happy in the days to come, and the sorts of things I find outdoors are more certain to be satisfying to the whole person. So, out I go again, and maybe I’ll find a few moments to sit still and watch juncos for a while. 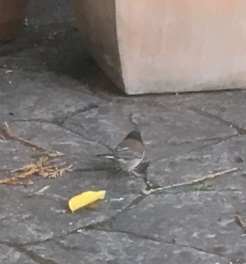 10 thoughts on “The darling juncos flew in.”