“…what transformed the cross and eternally transforms the cross into victory if not the love of Christ, the same divine love that, as the very essence and glory of the kingdom of God, Christ manifested and granted at the last supper? And where, if not at the last supper, do we find the consummation of the full, complete self-sacrifice of this love, which in ‘this world’ made the cross — betrayal, crucifixion, suffering and death — unavoidable?

“The gospels and the church services, particularly the wonderfully profound services of passion week, witness precisely to this link between the last supper and the cross, to their connection as the manifestation and victory of the kingdom of God. In these services, the last supper is always referred to that night that surrounds it on all sides and in which particularly shines the light of the festival of love that Christ accomplished with his disciples in the ‘large upper room, furnished,’ as if prepared in advance from all ages.

“This was the night of sin, night as the very essence of ‘this world.’ And here it thickens to the limit, it prepares to devour the last light shining in it. Already the ‘princes of the people are assembled together against the Lord and his Christ.’ Already the thirty silver pieces  —

the price of betrayal — are paid. Already the crowd, incited by their leaders, armed with swords and spears, are heading out on the road leading to the garden of Gethsemane.

“But — and this is infinitely important for the Church’s understanding of the cross — the last supper itself took place under the shadow of this darkness. Christ knew ‘the hand of him who betrays me is with me on the table’ (Luke 22:21). And it was precisely from the last supper, from its light, that Judas, after taking the morsel (John 13:27) went out into that dreadful night, and soon after him, Christ.

And if in the services of Holy Thursday, the day of the express commemoration of the last supper, joy is all the time interlaced with sadness, if the Church again and again recalls not only the light but also the darkness overshadowing it, it is because, in the double exits of Judas and Christ from that light into that darkness, she sees and knows the beginning of the cross as the mystery of sin and the mystery of victory over it.” 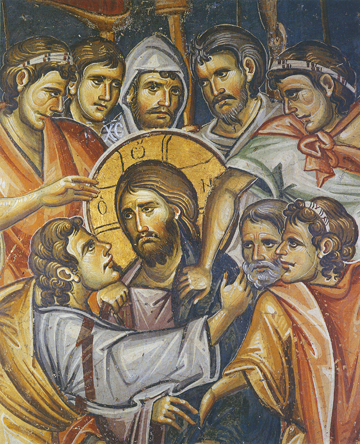 On Holy Thursday one of the events the Orthodox Church commemorates is the institution of the Sacrament of the Holy Eucharist at Christ’s last meal with His disciples; on this occasion I thought to share a post from Abbot Tryphon on the topic of this mystical sacrifice:

The Orthodox Church believes the Eucharist to be a sacrifice, in which Christ himself performs the act of offering, and is both priest and victim. This sacrifice is offered to God the Trinity, and not just to the Father, but also to the Holy Spirit and to Christ Himself. It is Christ Who is offered, and to Christ the offering.

Our Orthodox theology also teaches that the Eucharist is a propitiatory sacrifice, offered on behalf of both the living and the dead, and is not a mere figure or symbol but a true sacrifice. It is not the bread that is sacrificed, but the very Body of Christ. And, the Lamb of God was sacrificed only once, for all time. This sacrifice at the Eucharist consists, not in the real and bloody immolation of the Lamb, but in the transformation of the bread into the sacrificed Lamb.

All the events of Christ’s sacrifice, the Incarnation, the Last Supper, the Crucifixion, the Resurrection, and the Ascension are not repeated in the Eucharist, but they are made present. The Eucharist is both symbolic and mystical, and is understood to be the genuine Body and Blood of Christ, precisely because the bread and wine are the mysteries and symbols of God’s true and genuine presence and His manifestation to us in Christ. It is a mystery precisely because the Eucharist defies analysis and explanation in purely rational and logical terms. For the Eucharist, as Christ himself, is a mystery of the Kingdom of Heaven which, as Jesus has told us, is “not of this world.” The Eucharist, because it belongs to God’s Kingdom, is truly free from the earth-born “logic” of fallen humanity.

Saint John of Damascus tells us, “If you enquire how this happens, it is enough for you to learn that it is through the Holy Spirit … we know nothing more than this, that the Word of God is true, active, and omnipotent, but in its manner of operation unsearchable”.

With love in Christ,
Abbot Tryphon

I don’t know if I have ever before considered the difference between the betrayals of Judas and Peter. In a recent podcast for Holy Week Sister Vassa Larin gave a talk on this subject that I found very moving.

Judas is most famous for handing Jesus over to the authorities for the price of 30 pieces of silver. Right up until that momentous event he had been the disciple who had the responsibility for “the bag,” that is, he was the treasurer for the company of Jesus and his friends.

In the Gospel of John we read this telling account:

Then, six days before the

Passover, Jesus came to Bethany, where Lazarus was who had been dead, whom He had raised from the dead.  There they made Him a supper; and Martha served, but Lazarus was one of those who sat at the table with Him. Then Mary took a pound of very costly oil of spikenard, anointed the feet of Jesus, and wiped His feet with her hair. And the house was filled with the fragrance of the oil.

But one of His disciples, Judas Iscariot, Simon’s son, who would betray Him, said, “Why was this fragrant oil not sold for three hundred denarii and given to the poor?” This he said, not that he cared for the poor, but because he was a thief, and had the money box; and he used to take what was put in it.

But Jesus said, “Let her alone; she has kept this for the day of My burial. For the poor you have with you always, but Me you do not have always.”

What Sister Vassa points out is the lack of love for the Lord that Judas shows  here. She gives an example from modern life, to help us imagine: What if you are a mother whose son brings you flowers, and all your husband can say about the gesture of love is, “What a waste of money!” What would that tell you about his own love for you? And how would you feel?

We don’t know why Judas had failed to respond to the love of Christ and to reciprocate, but it seems that even at that last supper where he was present with the other disciples, Jesus was giving himself to Judas until the end, humbly washing his feet right along with the others, and offering him in particular a piece of bread from His own hand. As Jesus was speaking about how they ought to love and serve one another, He was doing the same. But Judas did not get it. In the words of Canticle Nine for Holy Wednesday, “…in exchange for money he rejects fellowship with Christ….how hast thou forgotten what Christ taught thee, that thy soul is more in value than the whole world!”

Afterward, when he saw that Jesus was condemned, he regretted what he had done, but Sister Vassa says it seems to be for ethical reasons that Judas regrets it, and not because he sinned against someone he loved. He distances himself from his sin and from the Lord even in his words, not using the name of Jesus but only referring to him as “innocent blood” that he had wrongfully betrayed. Judas immediately gives in to despair and commits suicide. He did not have the loving connection to Christ that would have been the starting point for going in a different direction, back to the fold where he had previously been loved and accepted. As Sr. Vassa says, “Even if you betray someone, love enables you to weep and repent; there is a connection, a personal relationship that still exists even when you fall short.” 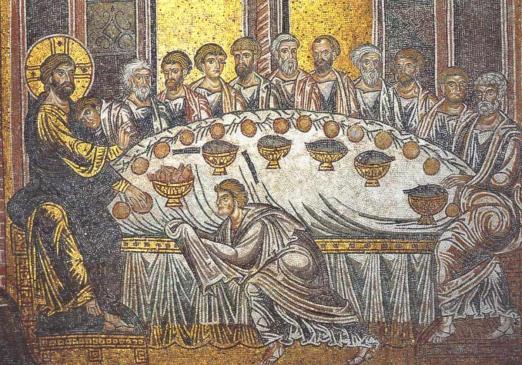 Peter, on the other hand, soon after saying that he would lay down his life for Christ, three times denied that he even knew the Lord. He was cut to the heart when Jesus looked pointedly across the courtyard at him, and he realized he had done just what the Lord had warned him about earlier that evening. Peter went out and wept bitterly, which is an appropriate response if you have betrayed and hurt someone you love.

And if you are the betrayed? Some of us may have to share this experience of the human condition, as Christ did. Only God can forgive sins, but as much as possible we would want to respond as our Savior did to Peter, and be glad if those who sin against us are repentant and come back.

Sister Vassa: “When Peter is restored by the risen Lord, the conversation is not about saying sorry, it’s not explicitly about pardon or forgiveness, ‘Let’s get down to analyzing what you did wrong.’ No, it is about affirming love. Three times Christ asks, ‘Do you love me?’ The Lord does not say, ‘What do you have to say for yourself? What have you

done?’ Peter is allowed thrice to affirm that which is salvific for him; that’s what saves Peter. It’s not even faith; love precedes faith.”

During Holy Week there are many doors through which we might enter to be with the Lord, many personal stories we can relate to, some more than others, but all of which are instructive. Let’s stay with Him, Who is Love. Thanks to Sr. Vassa for her wisdom, and I will close with a longer passage from her podcast:

We can’t forgive sins – only God can forgive sins. “Your sins are forgiven you!” We are so used to hearing that, we almost take it for granted, but this was not clear to those who hadn’t met him yet. This was an incredible gift.

Most of us don’t know what it’s like to live without constant forgiveness. If there were no forgiveness, there would just be suicide. Where do you place those failures? What do you do with your sins? Just how dark would it be? Let’s contemplate the great self-giving and forgiveness going on this week, amidst the great darkness and betrayal and falling short, all the evil in the world crashing down on our Savior who’s not avoiding it. He’s taking it all on, accepting it, walking through it, letting it crush him, letting it kill him, and then he’s descending into the very hell of us, and bringing our humanity out in new life and having overcome all of that darkness. Let’s open our hearts up to this.

The saints always look to the other life. It is the grace of the remembrance of death.