Two days ago I saw a mallow blooming along my path and I thought it was so pretty, I planned to post the picture I snapped as soon as I got home. I guess I snapped too hurriedly, because I didn’t get a good picture, and yesterday I didn’t get back there to try again.

This morning was foggy and then cloudy, which would make it easier for me to get a good image, but I as I put off my walk for one thing and another I started to worry that the sun would beat me to the spot. Eventually I set off, walking fast and looking up at the sky as I went, where indeed the sunshine was about to break through.

Soon I forgot all about the lighting, when I turned on to the path to see — decimation! 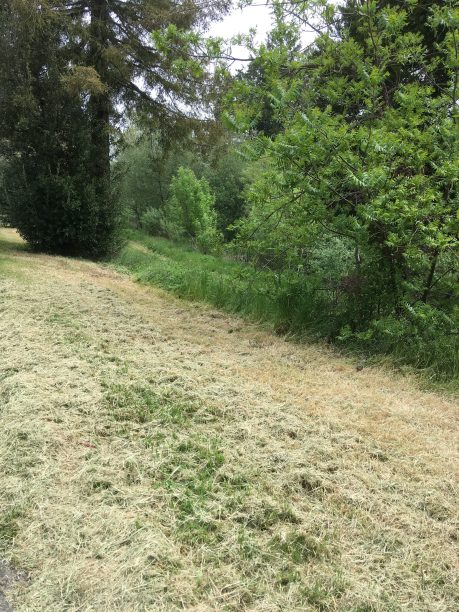 Clearly my city’s maintenance workers are confident about what is a weed: anything growing in a 3-6 foot swath along the bike paths is Unwanted and deserving of execution at any moment.

This is the spot where Common Mallow had come into its bloom:

I will post the picture I took in case I don’t get another:

My eyes were peeled looking for a mallow that might have escaped the mower and I found one:

I also went down by the creek to get closer to some cow parsnip to see if it actually was that, and saw lots of lush and wild plants who are safe for now… at least, until someone decides to dredge the creek! 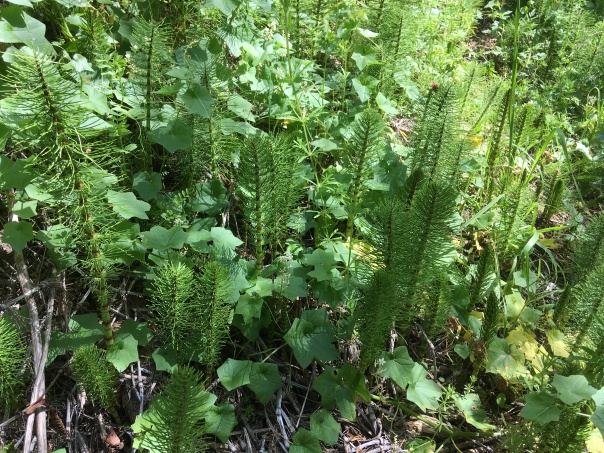 That mix includes a kind of horsetail reed, probably Equisetum hyemale. I have another species in my garden, which I don’t have time to tell about right now, because I need to actually go into the garden and work, and pull up some of my kind of Equisetum, which I am considering a weed in some places, and in other places, an ornamental plant. 🙂

I noticed those plants above because I had taken a short-cut home, being somewhat disheartened by the ruin of my usual fields of research, and that led me past a less familiar stretch of the creek. [Update: The vine above I’m pretty sure is a wild cucumber or Marah, which is in the gourd family.]

Mowing is the thing to do this week, it seems. My neighbor Ray died a couple of years ago but someone is still “taking care of” his house, it seems. I don’t think it looks better than it did before they mowed the weeds he left behind, but I understand: now that our rainy season is over, all of these weeds will turn into crispy dry Fuel for wildfires, and after last fall’s devastation, people are duly careful.

Many weed portraits were added to my files in the last weeks while the plants were enthusiastically obeying their calling, and which I will use to continue my botanical, etymological and philosophical studies of weeds. So never fear! Weeds will return to Gladsome Lights, and I have no doubt they will also return to the borders of my walking paths.

9 thoughts on “My weeds, massacred.”