My raccoon friend hasn’t been around lately, that I’ve seen. And most of the wandering cats have been scarce, now that Blackie has marked the back yard and comes several times a day to see if anything is in the bowl. Actually, Blackie is now only his nickname, and his real name is now Jim, after Huckleberry Finn’s fugitive friend. 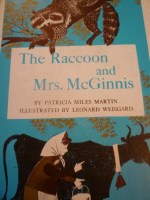 I’m surprised at myself, calling that ‘coon My Friend. But when I first blogged about him, Janet at Across the Page told me about the book at left, which I promptly ordered and have received.

It tells about a lady who is generous toward a mendicant raccoon, and later is the happy recipient of an inadvertent good deed (is that an oxymoron?) performed by the beast.

I admit it made me think more kindly of the fellow I saw, though he is as big as a bear. Some people have cautioned that raccoons wandering about in daylight might carry rabies. But others have said it is a myth that raccoons are primarily night animals. They are perfectly healthy and happy foraging in the daytime.

Lately I’ve been waiting for Jim to show himself before I put anything in the bowl–mostly to avoid feeding the raccoon. Since I do live in suburbia, I suppose my neighbors would not appreciate it if I were to start encouraging woodland creatures to visit more than they already do. Raccoons are cute, but those opossums that might follow after are hideous.

10 thoughts on “Kindly or Beastly”