The only theme that I can find in the photos I took this week is family togetherness, but the California weather was mild enough that I could add some shots of the various natural settings in which we happily congregated.

Many of us gathered at Pippin’s place in the woods — the resident deer clan showed up, too, and were gifted with potato peelings and runty pears for their Thanksgiving dinner. They also ate a quantity of willow leaves, sometimes from the patio table.

Snow had fallen Wednesday night and creatures were storing up for the winter, whether in fat or food or bedding. Pippin called me to the window once to see a squirrel chewing off grass and stuffing it into his mouth. Clumps of grass stuck way out on either side of his fat cheeks even after he rearranged it so as to fit more in.

He looked over our way and when he saw us staring he stopped work and stared right back for a minute, then figured he had enough for that trip and disappeared around a tree.

Arriving a day early meant that I had time to help bake pumpkin pies and read Sunset magazine to Scout.

Mr. Glad had put out a call for people to bring table games, and Soldier brought Jenga. While the pies were smelling up the house real nice I showed the little boy how to play and he immediately learned how to at least look like a serious contender.

When Pathfinder’s group arrived Annie played the piano, and after dinner they revealed the darling candy-and-cookie turkey craft that they wanted to show the littlest cousin.

It really was a lovely and relaxed afternoon and evening, with plenty of time for various groups of cousins and uncles to play several games, listen to 49ers football, and scatter the deer when they went out back to throw the football themselves.

We ate pies baked by four different people for supper, and sang “O God Our Help in Ages Past” before we had to say good-bye by passing around kisses and hugs. Four of the Glad Children had been able to come and take this rare opportunity, along with a couple of spouses and five grandchildren.

The next morning we brought Kate and her friend home with us for a couple more days, driving through the patchwork of orange and brown in the Napa Valley vineyards on our way. Kate and Mr. G. listened to each other’s iPod collections and I took the wheel for the windiest stretch of road so that I wouldn’t get carsick.

Today we took them wine-tasting in another valley, where the scenery was rich and the weather was warm enough for us to sit outside for lunch. Strange, though, how the vines in my best photo from today have barely started to turn color. 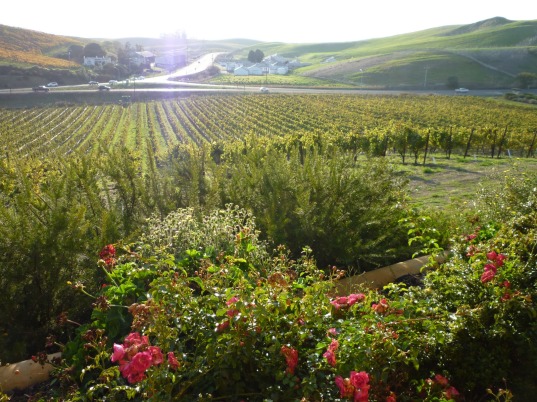 This picture might make you think it’s all tropical here. But the sun was slanted and we didn’t feel exactly toasty. I was glad to come home and build a good hot fire against the cold. Its warmth is a better metaphor right now for the kind of love that binds our very God-blessed family.

6 thoughts on “Kinfolk in November”