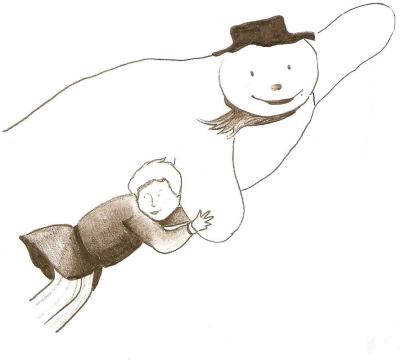 While we are waiting for Christmas and preparing our gifts, and thinking about what Santa and our parents are preparing for us, children are lucky if we have some snow around with which to build a snowman or snowlady.

My own grandchildren sometimes have that. But when I was a child, I only had the beloved “Frosty the Snowman” 45 to play on my little record player.

It’s the only record I remember from my youth until I bought such ones as “Like a Rolling Stone,” and I listened to the Frosty tale over and over so that I can still hear the voice — maybe it was Red Foley — in my head. On the other side he sang “Rudolph the Red-Nosed Reindeer.” The image below is not quite like what I owned, but it evokes the memory well enough.

I remain snowless, and don’t mind a bit. Besides, I can watch “The Snowman” on video. Those who lack the technology for watching movies (and I know there must be some of those people still, though they are probably not the ones reading this) could read the wordless book The Snowman.

But the video is so enchanting, with its haunting tune. The first time I borrowed the movie from the library, it was a version with the song, but since then I have only found it with a purely instrumental score. We are all fortunate now, and I am more than pleased to tell you that YouTube has a clip that includes sung lyrics of “Walking in the Air.”

When I turned fifty a friend took me browsing in a quilt shop to pick out a few pieces of fabric as a birthday present from her. Several prints called to mind images from the adventures of the snowman and his little boy, and I took rectangles of them home with a theme brewing.

I sewed by hand several potholders that I call my Snowman Potholders. Of course, they have nothing to do with Christmas, except for their frequent role in pulling pies out of the oven for Christmas dinner.

Waiting….We Orthodox are still waiting until December 25 (or January 7) for the feast and waiting to feast, because we are preparing our hearts, which are tightly bound to our bodies. But participation in the Advent fast needn’t mean that children of any age must forgo all goodies. I made this festive rainbow jello for one Christmas Day, but while we are still fasting it seems to me it could easily be made with some soy or coconut milk replacing the small dairy part of the recipe.

Now I’m trying to figure out how to tweak this colorful recipe into a frozen dessert. It already has the brightness of Tolkien’s wintery image, and I think I might attract my snowmen friends to my holiday table if I just advertise that for dessert we are serving a treat called “Northern Lights.”

(This is the third in my contributions to Pom Pom‘s Childlike Christmas Party.)

14 thoughts on “Snowmen and Jello – Christmas”