Tonight at dusk when I was sprinkling the basil through the hose nozzle, I saw a couple of bumblebees frantically getting their last drops of nectar from the Hot Lips salvia bush. It was really hard to get a picture of this one because he was in such a hurry floating and buzzing from one bloom to the next.

Pippin was sitting on the swing with me this week and she noticed as I had, that the honeybees favor the lavender, while the big black bumbles stick to the salvia. Or maybe it is that there are so many honeybees that they get first pick of the bushes, and the few bumblebees segregate to whatever is left over.

The honeybees like the lambs ears, too. I am thrilled to have so many bushes near my swing where I can see hardworking creatures fulfilling their purposes. I put this one in the shadow of my head to get a good shot.

Mr. Glad and I have been as busy as bees ourselves. For four days we took care of little Scout again; he keeps us running up and down the stairs and all over the garden, and sometimes we take walks through the neighborhood along the bike path. I showed him the wild fennel and how the young shoots especially are tender for munching and taste like licorice.

He’s a quite friendly fellow, and as we were standing on the side of the path nibbling our greens he was lucky to see some people walking a dog. He held up the fennel frond and called to them, “We’re having a picnic!”  It’s only been about three weeks since I was dreaming about picnics I might make happen Someday. That fennel picnic happened with so little effort and no planning at all.

PomPom was just writing about picnics this week and pointed out that our Lord’s feeding of the 5,000 was a blessed picnic indeed. I’m pleased to see that my grandson has a good start on appreciating how substantial are the little things God has growing along the path of life. 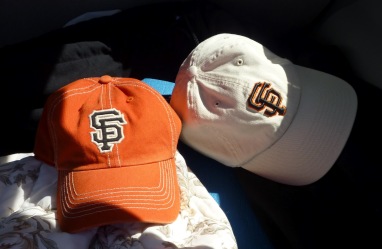 Last week I was buzzing with joy, flying down the state a ways to greet the new grandson “Liam.” A couple of days after that, Mr. Glad and I went to a Giants baseball game, which is pretty much an all-day commitment. It was fun to see our team beat L.A.

Then there were the several days with Scout and his mama. And no sooner had they departed for home than we were sent on three errands of mercy in one day. My mister had to drive a distance for the last one of these and isn’t home yet.

Back in April in the Prologue of Ohrid I noticed a couple of references to saints whom St. Nikolai compared to honeybees flying about carrying honey, or laboring diligently at the work for which they were created. Just watching the bees as I rest on my swing makes me happy, and the sight of them reminds me that after a short break I need to be up and at my work again.

I’d like to be more like the honeybees. When the last bumblebee was anxiously trying to get more salvia nectar, all the honeybees had gone from the lavender. They knew enough to give up for the day and go to bed. And so shall I.

7 thoughts on “Busy as Bees”