This is the first year that I received a tomato plant for my birthday, and I was very happy about it. My friend grew it from her volunteers, from her favorite variety of the previous summer, and handed it to me in a 4″ pot. I got it into the ground within a few weeks, and it grew like crazy. Some of our first fruits came from that bushy plant – and they were huge!

But we Glad farmers like our tomatoes to be more smoothly globe-shaped, not with the big shoulders and deep grooves of these Rainbows, or Big Rainbows as they are called on the nursery websites. I have mostly dipped them in boiling water so that I could easily peel them and cut them into chunks for the freezer, but when I took 15# of them to church last week they were scooped up fast.

Our Persimmons have also been like that this year; previously they were like other gardeners’ photos on the Web. Maybe it is a feature of heirloom tomatoes that there is variation in the shape? Does any of my readers know what causes this? The Rainbows are smoothing out, now that they are past the peak of production and smaller. (I should slice up a few for dinner tonight.) But not the Persimmons.

Well, we haven’t been able to keep up with eating them fresh anyway. I have been freezing quarts and quarts. Even on the morning of my departure for the mountains I quickly scalded some Early Girls, and when I ran out of time I stashed them in the freezer whole with skins on. I figure the skins will come off just as easily when I defrost them again. I hope I’m right.

So as not to let tomatoes take over my blog the way they have taken over the kitchen, I’ll consolidate tomato stories here, and show you my latest pot of Cherry Tomato Soup. This batch I cooked down a bit more than usual – so that I will have a better chance of fitting it into the freezer that is getting maxed-out.

After stewing the tomatoes and basil for a couple of hours, I added a little cream and chicken broth and puréed some of it before serving it with a meatloaf dinner. So yummy. 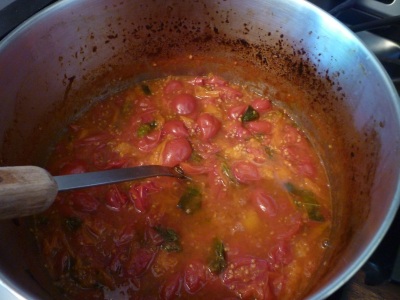