The robin outside my window this morning had his priorities straight. Before there was light enough to see by, before he even thought of going about his necessary business of sustaining himself by eating, he spent an hour and more in praise and song. I was unusually awake and he helped to me to tune my heart to the same frequency. 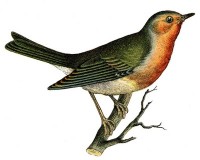 That happy hour I spent with him was like a special gift I opened first thing on the occasion of my name day. In addition to Myrrhbearers Sunday, which is a movable feast, St. Joanna is commemorated on June 27 every year. It’s a good day to head over to church and do a little garden work along with some celebrations in the church.

This blog post contains a good overview of what we know of St. Joanna. It is from a man who was planning to name his daughter Joanna, though he admits she is a “relatively minor saint.”

I had my own reasons for choosing Joanna as my patron saint when I converted to the Orthodox Church in 2007, which were not exactly the same as the following that an anonymous Christian listed in a comment on that blog in the same year, but I am grateful for her thoughts and have added them to my personal list:

1. She did what she could. She couldn’t stop the beheading of John the Baptist, but she could give his head a decent burial, and she did that.

2. She went where Christ was–the cross and the tomb. She didn’t go alone–she was part of a group. I want to go where Christ is, and I need to go with the Church.

3. She had a name we can pronounce in English.

One thing I can definitely relate to in Joanna is that she needed the angels to tell her not to seek the living among the dead. These lines from a hymn for Myrrhbearers Sunday will be good for me to sing all day:

The angel came to the myrrhbearing women at the tomb and said:
Myrrh is meet for the dead;
But Christ has shown Himself a stranger to corruption!
So proclaim: the Lord is risen,
Granting the world great mercy!

3 thoughts on “Tuning my heart with St. Joanna.”