While I was hiding my splotchy face from public, I pruned my snowball bush. This tree is one of only two plants that remain on the property from when we bought our house in 1990. I enjoyed doing a sort of pictorial historical study as part of composing this post, and will share some pictures from the last ten years, for my own nostalgic reference, I suppose. 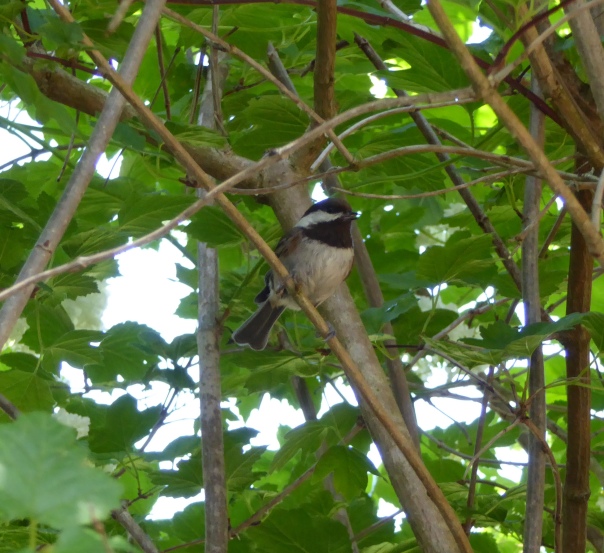 This viburnum had not been dealt with thoroughly for a long time! As I squeezed between it and the fence, and maneuvered my loppers between the branches here and there, I recalled similar intimate springtime engagements through the years. We have a long history, Snowball and I, of me trimming and grooming, and him responding ten months later by adorning my garden with a glorious display. I’ve even been given flowers with which to decorate graves at appropriate times.

It took several hours over two days to do a thorough job of thinning the branches evenly, and shortening the whole enough that I can manage it more easily in the future. Now it’s so thin it was hard to get a good picture. I must have removed 80% of the plant mass; the piles of clippings all over the place attest to that. But I bet the flowers will be bigger next year!

I think Alejandro my sometimes landscaper/garden worker will come soon to remove the offending spurge after all, and he should have time to help me clean up the prunings. I don’t mind doing that, either, but I also have books to read and meals to cook and walks to take… I’m satisfied that I was able to do the pruning itself, in a way I don’t think anyone but me has ever done it in the past or would be willing to do it ever. I count myself the most blessed of women to have time and strength, and a garden to work in, where in the back  corner lives an enduring snowball bush!

9 thoughts on “Snowball and I have a glorious history.”