When I posted about borage two months ago, half of the commenters said they also hadn’t had luck growing it. For some it didn’t reseed itself; for others, the summers were too hot. Kim said, “I have always thought it to be easy,” though she doesn’t have any growing right now.

The uses of borage was the subject of several comments; a couple of people said they didn’t know what they would do with it if it did thrive. But Cathy wrote, “It is such a captivating plant which attracts bees and creates curiosity from human garden visitors.”

And it is primarily for the bees that I thought to grow it in my Pollinator Garden, and so that I could behold that pretty sight of borage with bees buzzing happily around it. I let the insects make use of the plants, such as the oregano I always grow, but rarely use myself. The bees drink their fill of its nectar and last year I got good pictures of them doing it. So I guess I would use borage as material for my photo art. 🙂

I want the borage for its

pretty, often gorgeously blue, flowers. I would like to have a few of those flowers to put in salads or in cold drinks in the summertime. Martha asked if I would be making tea with it — perhaps I would! They say that tea made from the leaves tastes like cucumber. Here is a picture from the Internet of one way I can imagine enjoying those blue accents, come August.

A young friend dug four borage plants from her garden and brought them to me at church just this month. Then the weeks of rain began, so they are still sitting in their pots, but looking very healthy. 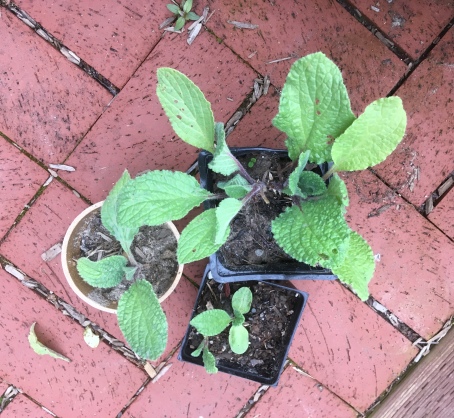 I have come to suspect that borage is a bit thirstier than most of the plants in my garden, and that previously it has died from drought. The one I bought and planted this spring is looking good after the recent season of bounty, during which its little roots were surrounded by as much water as they could drink, day after day, no matter where they reached. Once the rains stop — as of this evening, there is no rain at all on the forecast — I may just have to squirt a little extra from my garden hose on the borage, beyond what it gets from the drip irrigation.

It won’t be long before this flower cluster opens, and the bees arrive!
To do their work, to get their sweet drinks, they will find to be the easiest thing.

12 thoughts on “Sometimes both useful and easy.”