I don’t know who all will be in my class when my parish’s church school program begins again next month. But I think I know what I’ll be teaching, and it includes gleanings from this book that I haven’t read yet, With Pain and Love for Contemporary Man. The arrangement of our classes and students and how and where they will meet is one more realm of decisions that has been affected by the coronavirus situation, and that is why I didn’t know until this week to get busy and start reading; I had expected to be using a different curriculum.

This big book was first published in Greek in 1996, as the first of several volumes of the monk’s teachings. Over the course of 28 years his spiritual counsels were carefully recorded in notes and on tape, by the sisterhood of St. John the Theologian monastery in Souroti, for whom he was a guide and helper. In the preface they tell about his response at the beginning of their project:

“When Elder Paisios realised what we were doing, he was rather irritated: ‘Why are you taking notes?’ he asked. ‘Are you saving them for an emergency? You should put my words into practice; put them to work! Who knows what you are saying in these notes! Let me see them.’ When we showed him a sample, particularly the notes of one Sister, his expression changed. He seemed comforted and reassured, and exclaimed with satisfaction, ‘My goodness! She is like a tape recorder! She wrote it exactly as I said it!'” 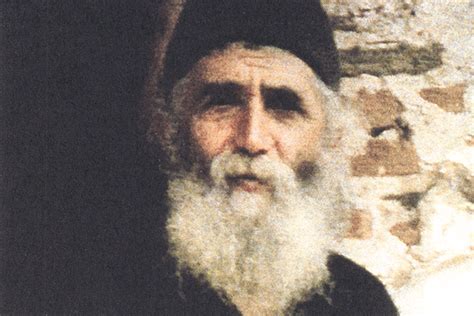 This man, who in 2015 the Orthodox Church formally recognized as a saint, was in 1924 born Arsenios Eznepidis, in Cappadocia in Asia Minor. This was just after the Greco-Turkish war, and just before those governments mutually agreed upon a population exchange that forced more than a million people to become refugees; his family was among them, and they moved to Greece. You can read all about his life here: St. Paisios, and in other articles and books. I just wanted to tell you a little bit in introduction, because I’m planning to share at least a few quotes from the saint as I go. For now I will leave you with this that I found elsewhere:

“What I see around me would drive me insane
if I did not know that no matter what happens,
God will have the last word.”

3 thoughts on “The elder’s pain and love.”