The bookishness of today was out of the ordinary in my recent life; shall we say, the last 20 years of it? And it only slightly resembled former days when going to the library was a regular thing, and between the several children and me we’d I bring home bagfuls of books every few weeks, after browsing the shelves as long as we could manage.

This morning I visited our church library, looking for a specific book on the Psalms, but couldn’t find it. I did borrow two related books, though, and three more on other subjects.

On the way home I stopped at my town’s public library to pick up what I had placed on hold via the library’s website. They email you when your holds are ready, you drive to the library and phone them, and they bring your books out in a bag and put them on a table. I have formed a habit of going to the library every Friday, so that I can return books too; currently you can only do that on Fridays and Saturdays. I had four books ready to pick up, as it turned out.

When I pulled into my driveway a few minutes later, it was pleasantly warm in  my car, and I knew the house was chilly, so I sat there and looked over those four books, which were all children’s books. The three that were by the same author I left in the car, because I will just take them back; I didn’t like the particular theme that the author seemed to be stuck on.

The fourth book I had borrowed because I noticed this week that two Orthodox priests I follow on Goodreads had given it five stars, and it was a book I wasn’t familiar with. I began to read it and didn’t stop, just sat there behind the wheel for the next hour being charmed, by The 13 Clocks. I have over my life enjoyed many things James Thurber has written, so I’m not surprised. It was really fun, and I’d have liked to read it through again right then.

But I was getting ready to go back to church, this time for a service. My priest wrote me that he was sure he’d seen that book I wanted in a box of titles that hadn’t been shelved yet (lacking enough shelves), so I went back early and looked through not one but four boxes. There was a book with a similar title by the same author, Fr. Patrick Reardon, not about the Psalms, and which I already own. But I found two more books in those boxes that called to me, to take them home, one of them being Four Arguments for the Elimination of Television, which I read a long time ago but don’t remember much of. So eleven books came home with me, and three stayed in the car. Here are the eight books that remain. 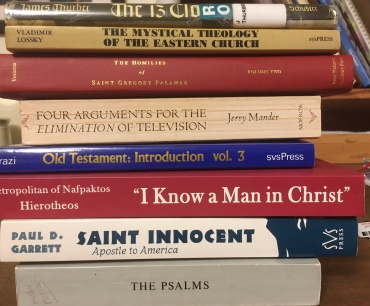 What is strange is to bring so many books into the house in one day, and not one of them did I buy! I can take them back to their places whenever I want, no remorse. These days there isn’t such pressure even with the public library system to return books promptly; they stopped charging overdue fines even before covid, and the books take a long time in process once you do drop them in the return slot, so they have to be lenient about everything.

Maybe I won’t have any of these very long, but for now, I have happily filled more crannies and nooks with more delicious books!