A podcast I listened to at the beginning of Lent encouraged me in my desire to spend more time reading the Psalms. It was Fr. Patrick Reardon’s homily in which he exhorted his own parishioners on three points, one of which was the need to pray 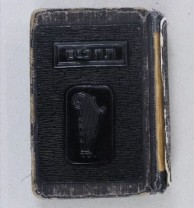 more during Lent. He suggested the Psalms, because the use of them is a tradition that was without doubt handed down to us by the Apostles.

Fr. Patrick told the moving story about the book of Psalms that Natan Sharansky‘s wife gave him the night before he was put in a Soviet prison, and how much it meant to him during the many years he spent there. Sharansky’s story of it is on the site of the National Library of Israel, where I found this photo.

If you would like to listen to Fr. Patrick’s homily yourself it can be found here: “As Though it Were Our Last.”