The time for summer vacations and traveling is upon us. I myself will be departing this week for the first of several outings short and long. So it was timely to discover words from G.K. Chesterton, my favorite philosopher, on the subject of sightseeing.

In an essay he wrote in 1931 he contrasted what he called the “age of monuments” with the “age of museums,” and found modern sightseeing problematic in that it is “not meant either for the wanderer to see by accident or for the pilgrim to see with awe. It is meant for the mere 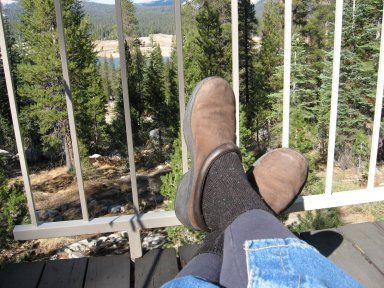 slave of a routine of self-education to stuff himself with every incongruous intellectual food in one indigestible meal.”

He hit that nail on the head as far as I am concerned. When H. and I were in England and Scotland I felt such an aversion to the museums, especially the ones with vast expanses of vertically-mounted text. Now GKC has explained what put me off: too much of the wrong food. I hunger for the monuments before which I can stand in awe, or the small discoveries, a few of which I wrote about and pictured here.

This photo shows one scene I expect to be enjoying very soon, not a monument, exactly, but evidence of and testimony to the Creator. I took the picture when on a solitary retreat two years ago, but it’s nice to know the spot will be essentially unchanged.