When I went to the northernmost reaches of California to deliver the quilt I wrote about in my last post, I was able to hang around a while afterward and get a tour of the house my daughter recently bought with her husband. The outdoor setting and my nature walk are the subject of this post.

Living in suburbia as we have for nearly 20 years, I’ve noticed that trees more often than not are a problem, because they are too big for the small spaces allotted to them. But this property had plenty of space for trees to grow for 30 years, into their majesty. In the center of the photo above is a Douglas Fir with a cave-like space underneath where I told Pippin I could envision children playing.

It’s like a park, what with the forest next door, and the tall trees nearer the house. Here is a Blue Spruce. 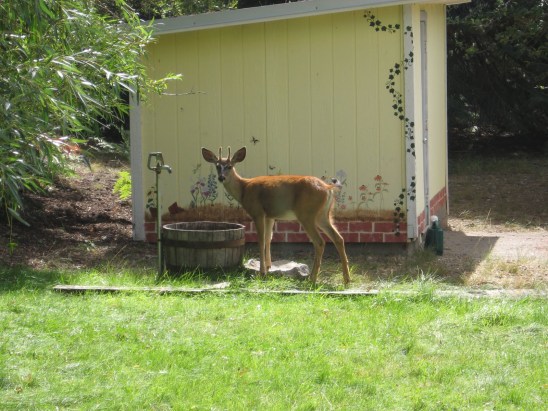 The house was unoccupied for more than a year, but the deer included the yard in the territory they considered home. This fellow is one of a family of the critters that live here, whom the new owners call Spike. 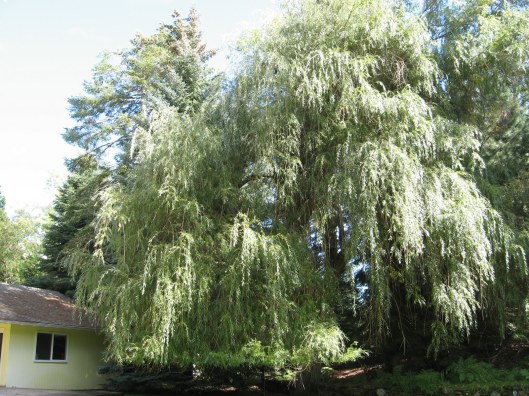 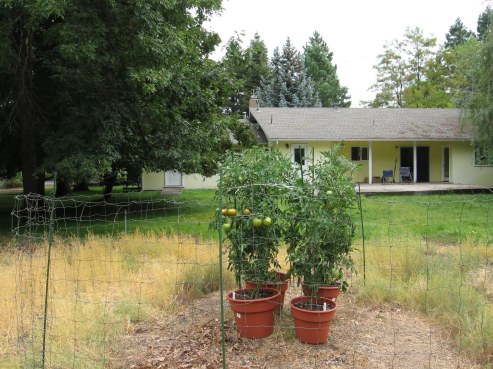 Spike and his kin watched as The People moved some pots into a sunny spot in the back yard, and a few weeks later they watched some fruits get big. One day they ate all the topmost barely-pink tomatoes.

The People made a wider fence so that hungry animals couldn’t reach the next fruits that ripened, and in the middle of September two of the Belgian heirloom variety called Ananis Noir, or Black Pineapple, were finally ready.

I was on hand to enjoy their really good flavor! 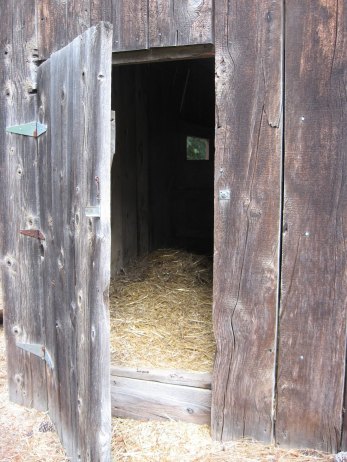 There are some outbuildings on the property, such as this one that is begging for some chickens or goats to move in.

And “next door” is a huge meadow, where I rambled with Pippin, my nature girl. We went through some forest on the way. I hope you will come along on our exploration. 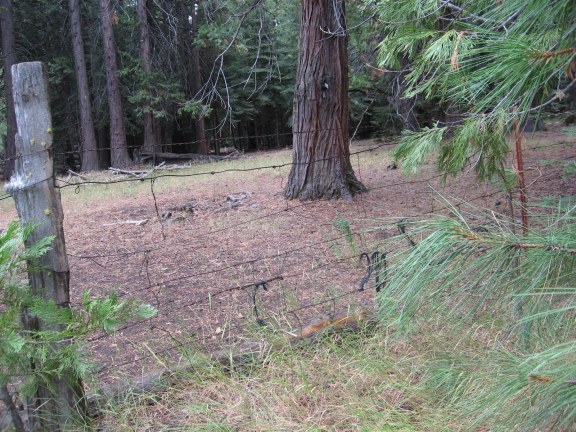 This is the fence through which we trespassed.

In our yard at home we have a pine tree that always looks dry and scraggly, so I was immediately impressed with the robust green needles on this Ponderosa Pine. 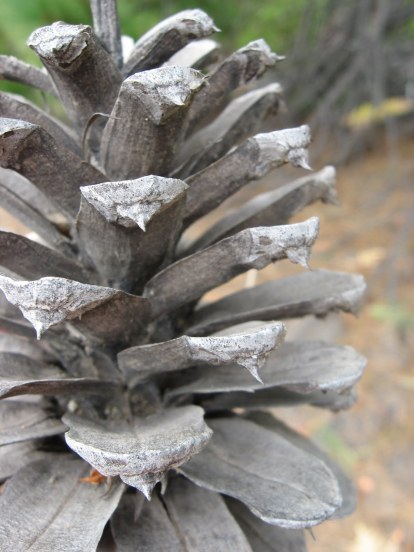 My guide let me know that it is hard to tell a Ponderosa from a Jeffrey Pine, they are such close cousins. But the barbs on the Ponderosa cone point outward and prick you when you hold it. The Jeffrey cones slant inward.

The forest floor is dense with needles and cones. Is that a blue jay feather I see on the left? 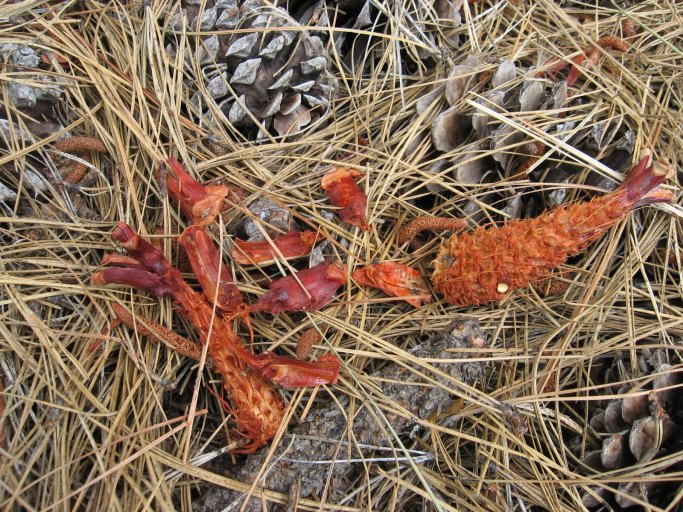 All over the woods were little piles where squirrels had made a meal of the Ponderosa cones and left the remains.

Sugar Pines are spindly, but their cones are bigger, like this.

We came out of the trees to see the expanse of meadow, with clouds blocking our view of the peaks. It looks pretty monotonous, doesn’t it? But there were a thousand different plants waiting to be discovered by a patient eye. 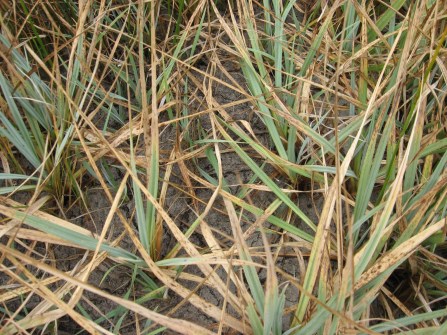 The ground under our feet felt odd. I looked down and saw this. The floor of the meadow is spongy, with a papery crust–the dried-up bog that makes walking out there difficult for most of the year. 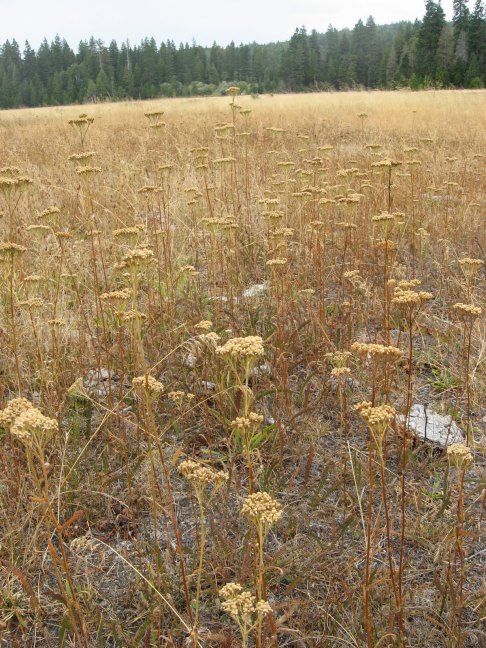 Yarrow is one of those plants that blends in with the general golden tones of a California summer.

This looks like a member of the pea family.

The darker swath through this part of the meadow is where a stream ran in the wet season.

I guessed by the distinctive minty smell that this was a type of pennyroyal. 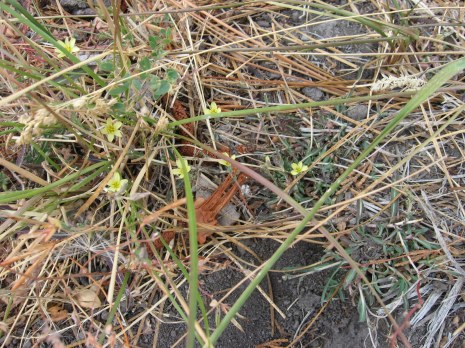 A tiny yellow flower seen only by God and us.

This plant below with tall purple blooms Pippin had never seen before. I hadn’t either, but that is more to be expected. 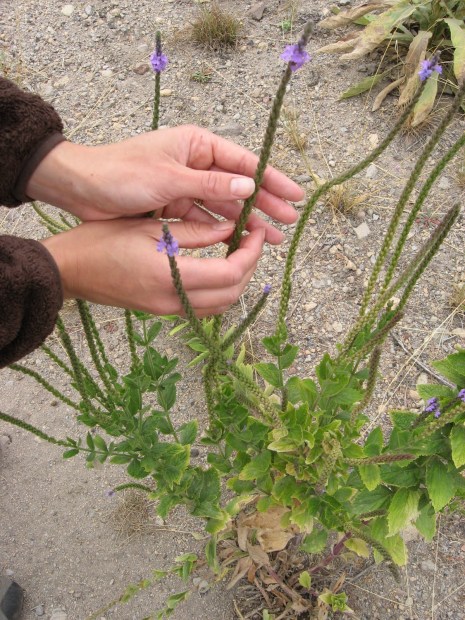 When I first glanced down at this plant, I thought of wild strawberry. But upon closer inspection, it didn’t have that kind of leaf.

My daughter knew that it was actually a type of ceanothus called Squaw Carpet. As I was taking these pictures, the drizzle was becoming rain, and we were headed back.

Less tame animals come around their place. This bear scat was fresh when they first saw it near the house, not long after the bear had gorged on manzanita berries.

ow in the neighborhood. This little fruit is all the cone they make. But they aren’t true cedars.

Douglas Firs make these cones with “rattails” sticking out. But they aren’t true firs.

I’m happy that among the imposters stand trees that are true to their name, like this fir. See how its needles stand upright? True firs, and not the Douglas kind, make good Christmas trees. 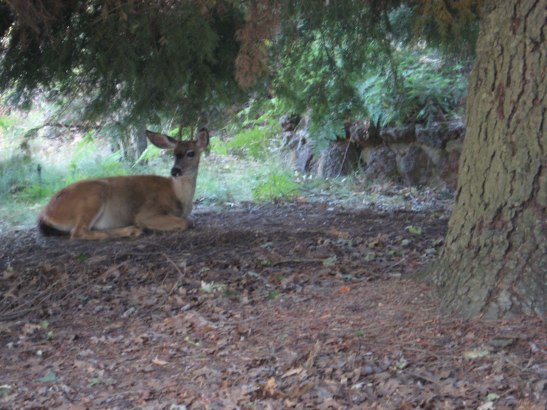 Remember my first picture, of the tree branches arching over a cozy den? Spike was resting there later, and didn’t mind me taking his picture. I wonder who will next be enjoying that spot, his grandchildren or mine?

5 thoughts on “Meadow and Trees”