What can one do when the garden produces only a few regular tomatoes and a thousand cherry tomatoes? It just this week occurred to me to make salsa with them.

The grocery store where I shop is a favorite of Hispanics, so it carries everything they could want, including many sorts of hot peppers. Nearly every time I go there I gaze at the boxes of peppers and lament that I don’t know which ones to buy for what.

Enough of that wimpiness–This time I took the plunge and bought Anaheims (in the picture above, next to the cilantro), which I am familiar with because we grew them in the past, and Serranos. The Serranos (dark green, at the bottom of the photo) were the experimental ones; I’ve never used them, but they don’t carry the most fiery connotation to my mind.

In the past I overdid the onion in my salsa creations, so this time I just used green onions. Also some sweet red bell pepper, garlic, and cilantro. 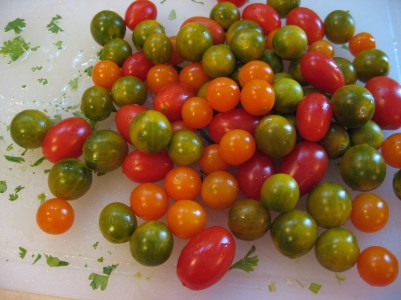 I’m sorry, I just had to show one more photo of my cherries before the summer is gone. Now that they have proven themselves, each with their own unique pros and cons, but mostly looking super together, I am thinking I want to plant all these varieties again next year!

Here are the approximate amounts of ingredients for this warming concoction:

Chop everything as finely as you want or are able, and mix in a bowl.

Here is Mr. Glad getting ready to scoop a pile of the stuff on to his tortilla chip.

He thought it was a fantastic recipe. Also he said he was surprised at how mild the Serranos were. Meanwhile, I was enjoying the flavors, thinking it was the best salsa I’ve made yet, as my fingers were burning and beads of sweat were forming on my red face.

6 thoughts on “This Night’s Heat”