Yesterday friend K. and little T. and I went to The City for the second of our annual Christmas outing.

First we stopped by Union Square to see the Christmas tree. My photo is from last year, but this year’s looked just the same. And this year the giant tree was an “85-foot Shasta White Fir from the Carlton Tree Farm in Mount Shasta.”

The St. Francis Hotel features an elevator with windows looking out on the Square, so we rode up to the 31st floor and down several times.

Then on to lunch at the famous John’s Grill. The restaurant has good food, and a replica of the maltese falcon from the movie by that name, hearkening to a scene from the movie shot in the restaurant. A couple of years ago the “original replica” was stolen, so this one is new copy.

John’s Grill is a favorite spot for politicians to meet for lunch, and you can see framed photographs of various famous people all over the walls. Right above our table was a picture of our former-maybe-future governor with a past owner in 1984.

We rode the cablecar  as we did last year. This time T. was happy to watch the guys adjust the cables at the end of the line and push the car into position for its return ascent.

After a steep ride that had T. and me hanging on to our post and sliding down the seat nevertheless, we arrived on Nob Hill, where after the 1906 earthquake and fire, big hotels were built and named after the wealthy people whose mansions in that neighborhood had been destroyed. I enjoyed the grandeur of the Fairmont Hotel, its spaciousness and the marble columns. 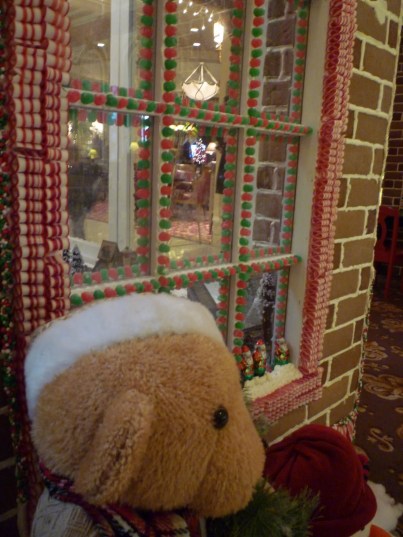 Even the gingerbread house was on a large scale, and made with real gingerbread and gumdrops, half a ton of ingredients and days and days of work. I was impressed by the silky evenness of the ribbon candy, as I’ve recently been on the hunt for some for my father-in-law. What I found in the supermarket is downright ugly compared with this.

It smelled rich and gingery, too!

We were on our way to Grace Cathedral, also on Nob Hill. The original church was also destroyed in 1906, and the new cathedral not complete until the 1960’s. K.’s parents were married here.

The crèche was my favorite part of our time in the cathedral.

Chinatown brought us back to the hustle and bustle.

This year’s oddity was these dragons made out of rope… 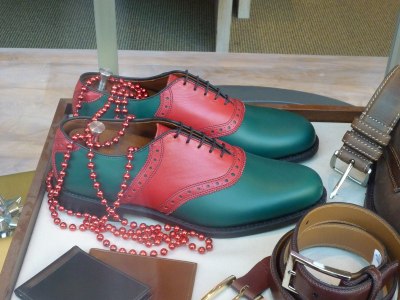 …and in another window, this year’s winner of the Christmasy Shoes contest.

Last year I snapped pigs resting in a Chinatown window. They were there again yesterday–or had they ever left? Those pigs prophesied of this morning, when I slept late, dreaming that I was writing a novel.

A relaxed outing, a lazy morning…. it’s the last I’ll see of those for the next week. I’m going to enter the fray in earnest, now.