Before I was married I didn’t keep a journal, at least not after the 5-year diary attempt in adolescence. And newly married, before children, I limited my writing to letters and sermon notes. It was only after having a child or two that I wanted to write at all, and I don’t understand all the reasons for the delay, but I used to think it had something to do with types of mental or creative energy.

I noticed after two or three pregnancies that I had no urge to write while I was pregnant. There are five long blank periods in the recorded history of my thoughts, scrawled in a mishmash of notebooks and stored in a box on a shelf. Much of my journaling over the years was filled with angst over church tensions or worries about whether I was being lazy about finding a “ministry” other than my family. I wrote long lists of what I had accomplished in a typical day followed by the lament, “And it wasn’t enough!”

What was it about carrying a child in my womb that eliminated the need for hashing everything out with pen and ink? Perhaps it wasn’t anything to do with the creative aspect of my participation in a magnificent process of nurturing a new and unique person–though my writing had been potentially creative in helping me to make sense of my world.

I started to write this blog about the similarities with my current life, where I am participating in a months-long creative work–thank God it isn’t nine months–and don’t have the thinking power to devote to any questions other than towel racks and paint colors. It’s only with great faith that I can imagine having anything significant to say ever again.

The idea I started with when I sat down just now doesn’t stand up to more scrutiny. Maybe my intellectual life 30 years down the road is entirely different. In the former time it was in a somewhat dormant stage, really, as I reminded myself in a recent post. The simple reality is that being with child made me happy and content. Maybe it was hormones. In any case, I didn’t need to write.

Now it’s that I can’t think well, that prevents me writing as I’ve become accustomed to. I hope it’s just a matter of distraction and overload, and that I will return to a version of my old self within another month or two. Already I have started sleeping better; it happened when I got the appliances into the kitchen. Family get-togethers and summer vacations will delay putting everything else back in place, but when the day comes that I don’t have to be ready at 8:00 in the morning for invading construction workers, it will be the beginning of my full return.

No, no, I mean the beginning of the next phase of my life. I know I can’t even return to last week, much less last year, intellectually or creatively or any other way. There’s always something new replacing something old, some loss and some gain. Today we moved the old furniture on to the new wood floors, and it all looks pretty, but we have lost some quietness from having (dirty) carpeted stairs. 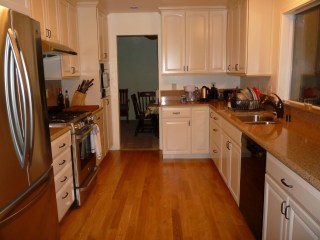 The disruption has forced me to thin out my belongings, and take stock of how I actually use my kitchen. Having canisters of flour and sugar on the counter doesn’t make sense for someone who rarely bakes anymore. Maybe stress and insomnia and change will blow some cobwebs out of my mind as well, to make room for fresher and clearer thoughts that I can type into blogs on my computer when it is re-installed in the room with the pretty new floor.

10 thoughts on “Blogs and Babies”