When Pearl was a toddler, all her toys fit on two shelves held up by cinder blocks. Most every day, with sun streaming in through big windows of the old Victorian where we lived at the time, she would absorb herself in exploring all her belongings and scatter them around in the process. 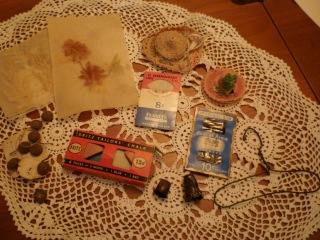 Later in the day, or the next morning, she’d show no interest in the toys that had been removed from the organized rows. She would wander aimlessly, unhappy and bored. But as soon as I tidied up the collection of blocks and dolls and plastic pull-toys, they were fascinating again and good for another long spell of play.

My own toy shelves hadn’t been tidied in at least 20 years until last summer when I tackled the chaos. I’m speaking of the boxes and baskets that held bolts and scraps of fabric, scissors and embroidery thread and patterns. Binder paper on which I’d written the body measurements of my granddaughters’ dolls, and the design for a copy of Bird’s tattered apron. Inherited notions, thimbles & thimble keeper.

Because I was known to like to sew, people thought of me when a grandmother or aunt died and left a button box or collections of needles and zippers, and I welcomed the gifts with open arms. You would think it was I and not my parents who grew up in The Depression; I even followed the example of my foremothers and snipped the buttons off before tossing out any raggedy shirt.

My grandmother Grace’s button box at least did keep all the buttons in one place. I still can’t bring myself to throw out the cards of odd old buttons in the bottom of it, and every year or two I pore over the loose ones in the top tray and imagine what I could stitch them on to.

All my wealth of possibilities grew without much notice because for a long time I couldn’t decide which spot or room would be my sewing area, and sometimes I’d let a year or more go by without even opening my sewing machine. But once everything had been deposited in one room, I saw that it was a burdensome barnful.

The chosen spot is a bedroom where I can have my sewing machine near the door and while I sit at it I can face outward toward the rest of the house; I didn’t want to lose touch with what might be going on downstairs. I had tried out the great room that is far removed from everything and often too cold, and I had also tried another bedroom that was too cramped, even though it was prettier.

Once I had invested in some storage racks and containers, and put things into their places, I could jump at the chance to sew doll clothes last year, knowing that my tools and materials were where I could find them. In the process of organizing, I found some interesting antique notions. And one of the doll clothes hangers that I had made and completely forgotten about.

Now that all my pins are in one box, all the spare buttons from purchased garments are in another, and there are no boxes of Hodgepodge anymore, my needlecrafting spirits have been lifted and I feel like playing again.