How lovely to shop at a farmers’ market and buy peaches and green beans fresh from the farm — how icky to bring the produce into my kitchen and notice an awful stink! It is coming from the plastic bags that the farm stand provides handily just above the bins of appetizing fruits and vegetables. 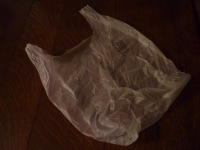 The bags themselves make me sick to my stomach if I keep them around very long, so twice or three times I have quickly emptied whatever it is into a different (reused) bag, and taken the disgusting plastic with its smell directly outside to the garbage can or recycling bin.

What on earth is in these bags that can make them reek much worse than an old garbage truck? It reminds me of the horrible stuff you can get to use systemically on rosebushes to prevent bugs and diseases.

On every successive trip to that market, I have completely forgotten about the bags until I’m already loading one with beans again! Tonight when I got home I held my nose and took some pre-disposal pictures. Then I checked out the URL. 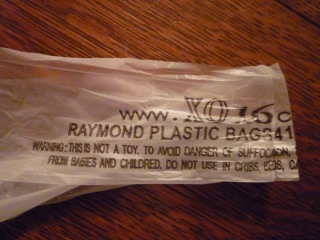 The only grocery bags listed on this website http://www.xo16.com are made in China, but the bags say they are made in the U.S.A.

I think it was at Trader Joe’s in San Francisco that I was given similarly odiferous bags that advertised themselves as completely compostable; printing on the bag instructed me to re-use the bag and then when I was finished with it to put it in my yard waste bin. (In my county, however, we are not allowed to do this.)

Why would I want to carry around a bag that makes me smell like a toxic waste facility? There are plenty of bad smells around on the earth without me contributing more by being that Green, and after all, a significant aspect of our environment is olfactory. Many people these days would like it if we all went perfume-less. Would they really be o.k. with everyone toting their anti-perfume around town as they did their errands?

Somehow it didn’t occur to me to talk to the farmers about the offensive bags. I did find that at the other end of the table, above the peppers, they offered a traditional bag that now seems innocuous by comparison. So next time I will try to avoid the sickening ones, maybe bring paper bags from home to weigh my beans in, and I will be bold enough to ask the farmers if they aren’t bothered by that foul smell?

After I had removed the bags from the house, the stench still clung to my hands, but thank goodness I had just opened a bottle of geranium-infused soap at the kitchen sink. I lathered up and the air began to smell like flowers. Now everything is nice here again, and I can end this post on a sweet note, in the category of Things I Like.

11 thoughts on “a smell worse than skunk”