Today we commemorate the repose of St. Seraphim of Sarov, of whom I have written before. He is the patron saint of my Orthodox parish. What a wonderful man! And what a blessed day we had, in spite of cold and even a broken heater in the church. Sometimes lately, when I am cold, I pretend that I am a monastic – and what would a monastic do? Pray, and be warmed by the Holy Spirit. I can’t say that I instantly become a prayer warrior when I think this way, but somehow it helps me to relax, and to at least offer up some kind of plea.

This icon of Father Seraphim is a fresco in our church, a picture I took sometime in the past when the light was falling in patches on him. Today, as I stood bundled in scarf and gloves, the sunshine came through an arched window high above the altar and blinded me for a few minutes until the angle changed enough to pass beyond my face. I didn’t want to change my position to escape it – whenever this happens to me I feel it as an extra gift from God, that He is giving me Himself in the warm light. 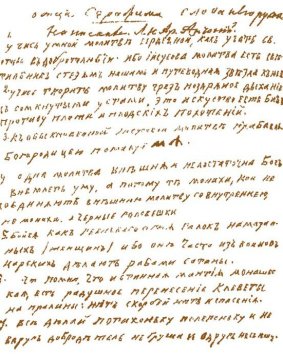 I want to pass on this quote from St. Seraphim, which came from a letter (pictured in its original form) that he wrote to Hieromonk Anthony in the first half of the 19th Century; it captured my imagination and heart from the first time I read it many years ago. The words have been translated in various clunky forms, but I like this version for the way it expresses the tone that he conveyed by his life. And it seems a good word for the new year, as well. Happy New Year to all of you, and may we all be drawn closer to His Kingdom in 2015.

Whatever you do, do it gently and unhurriedly,
because virtue is not a pear to be eaten in one bite.