Death is working in all of us. Last week death, by means of cancer, parted me from my husband, and I am now a widow. But the separation is not absolute, because Mr. Glad may be more alive than ever, to which truth the scriptures testify by the words of Christ Himself, “He is not the God of the dead, but of the living.” Nor will he and I be separated for long; we will meet in the Resurrection:

For the Lord Himself will descend from heaven with a shout, with the voice of the archangel and with the trumpet of God, and the dead in Christ will rise first. Then we who are alive and remain will be caught up together with them in the clouds to meet the Lord in the air, and so we shall always be with the Lord. Therefore comfort one another with these words. (I Thessalonians)

I do comfort and console myself with these realities, while feeling the equally real tearing apart of me and my “other half,” our souls and bodies having been intertwined like a ball of string that is really two cords so closely tangled you can’t identify which strand you are seeing in any part of the thing. If one string is pulled out of the ball, just how misshapen and odd will it be? That’s what I don’t know, and what scares me.

As for man, his days are as grass: as a flower of the field, so he flourisheth. For the wind passeth over it, and it is gone; and the place thereof shall know it no more. But the mercy of the LORD is from everlasting to everlasting upon them that fear him, and his righteousness unto children’s children…

Every member of our family has received huge amounts of grace and joy during the last weeks, and especially in the days leading up to the funeral, which was last Saturday. One friend remarked how sweet it is to die in springtime, the season of new beginnings. 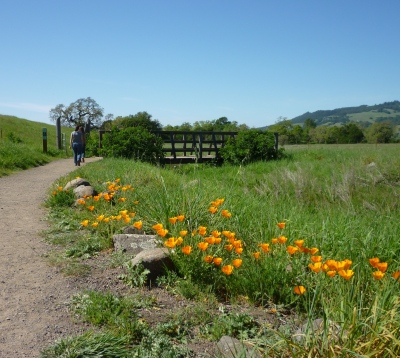 On Sunday afternoon two daughters took me up into the hills for a walk among the oaks with their tiny new leaves, and to see the first wildflowers coming out. It was a stroll, not a hike, because all of us were quite spent from all the emotion and the activity. And one of us, daughter Pippin, was 9+ months pregnant, so we weren’t attempting a fitness walk.

I took a lot of pictures, falling easily back into my old self’s delight in seeing the glories of Creation and making memories of them to prolong the experience. We saw at least two flowers that even Pippin didn’t know the names of; I will try to come back later and tell you, if I find out what they are.

Upon our return to the house the dear baby, whether on his own or by the promptings of his heavenly Father I don’t know, decided the time was right to make his arrival. Someone noted that he is an obedient child from the start, waiting until his parents had laid his grandfather to rest before taking center stage himself. That evening we welcomed a new man-child into the family, whom I will call Jamie.

Jamie also showed love to his grandmother by being born in this county instead of waiting one more day until he would have been back in his home town. Not only I, but his two aunties were able to be present when he came swiftly into the light and into our arms. Among other good names, he was given that of his grandfather whom he had just missed in passing.

It’s all too wonderful and mysterious and splendid, don’t you think? It’s Springtime.

28 thoughts on “Death and Life in Springtime”