Is there a Trout Lake near you? This name seems like an apt one for many lakes, but

I don’t think I’ve been to one before. Pippin and her family have come here several times, and they wanted to share the experience with me.

The cloud show was ever-changing and the reduced light helped my picture-taking, but at least one member of our party was disappointed that Mt. Shasta’s peak never emerged. Some people were looking so much at the trees and the yellow-headed blackbirds that we didn’t mind much. That is the nice thing about returning to one’s favorite places frequently: No one visit must be exquisite in all parts, because each time there is something changed and new and seasonal to appreciate.

I suppose if you were getting married at such a venue you would want that one day to have a view of the spectacular mountain. Like this one. I doubt that anyone has married there, however beautiful it may seem to us. And we were glad, the day we went, to have the whole lake and trail around it to ourselves.

Except for the wildlife. It was the first time I’d met those yellow-headed blackbirds, and I worked hard trying to get a picture of one. Pelicans also frequent the lake, as evidenced by bones.

Nesting platforms like the one below had been installed for geese, but evidently the birds did not find the ones we saw worthy.

It’s high desert, and the main trees you see are scrappy junipers with their milky blue berries. The several shades and types of grasses in wavy layers were set to shimmering when the breezes blew. 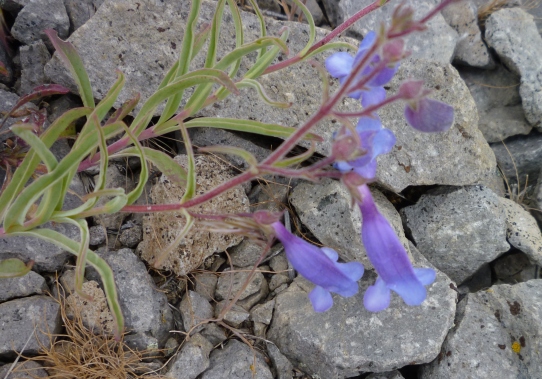 Closer to the ground you mostly notice sagebrush and thin grassy plants, but it’s not hard to find wildflowers all over the place, lupines and yarrow, fiddlenecks and these brilliant penstemons.

No matter how big I make these pictures, they refuse to convey the feeling of space you get out there. 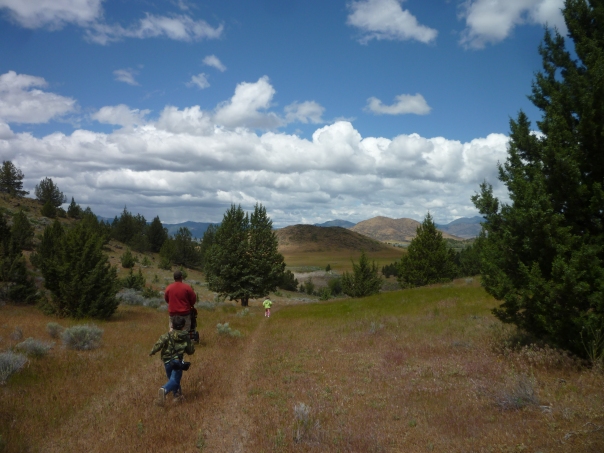 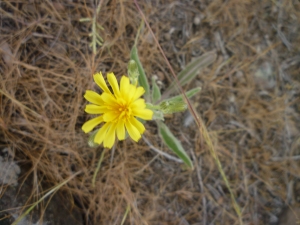 uting for them. They remembered the short cut to the other side of the lake and showed themselves to be good hikers.

Those blackbirds hopped around in the reeds and added their distinctive call to the atmosphere of the place, a place where I might have liked to sit for a long time, to listen and to feel the changing light as the clouds moved through the sky. Maybe Ivy was watching a blackbird when her mother took the picture below. The scene catches the meditative mood of the lake and makes me want to return.