On outings with Pippin’s family, I insisted on sitting in the “way back” of the van they call Batvan. That way I had a close-up view of the map that Scout had made, which he used to show me the route from my house to his house to Montana to the river…this map covers just about anywhere you might want to go – or at least, where he wants to go.

I had (all without any map whatsoever) just arrived in

my car Billy Bluesage via Pathfinder’s place in Oregon (home of Annie the photographer) in Siskiyou County where this family of my middle daughter lives. It was their baby Jamie who was born the day after his grandpa’s funeral, bless him. I have posted many pictures of their place and environs over the years, here and here, and here for example.

The first morning I woke up I took some pictures off the balcony of the room in which I had slept. It’s nearly 4,000 ft. elevation there and the chill still comes on in the evening at this time of year, but I had been cozy in my flannel, under a down comforter. The lows had been predicted to be in the 30’s F°. Tomatoes must be kept under cover for a few more weeks.

During that day I guess we mostly got ready for our picnic-and-campfire outing that was to be that evening. I must have been very lazy. I saw some deer in the back yard, but I never did go out and take the tour of Pippin’s garden. A fire was burning in the wood stove and I was like one of the cats liking to hang out in that room.

While the sun was still up and the sky blue, we packed all our food and baby gear and The Professor drove us to a spot on the Sacramento River where the North Fork comes in. You’d never dream that this little stream goes on to gather water from tributaries for more than 400 miles to become the longest and largest river in California.

The map below shows its course; we were sitting near the top where the two lines come together from the left, the North and South Forks of the river joining in a happy song running over the granite stones. 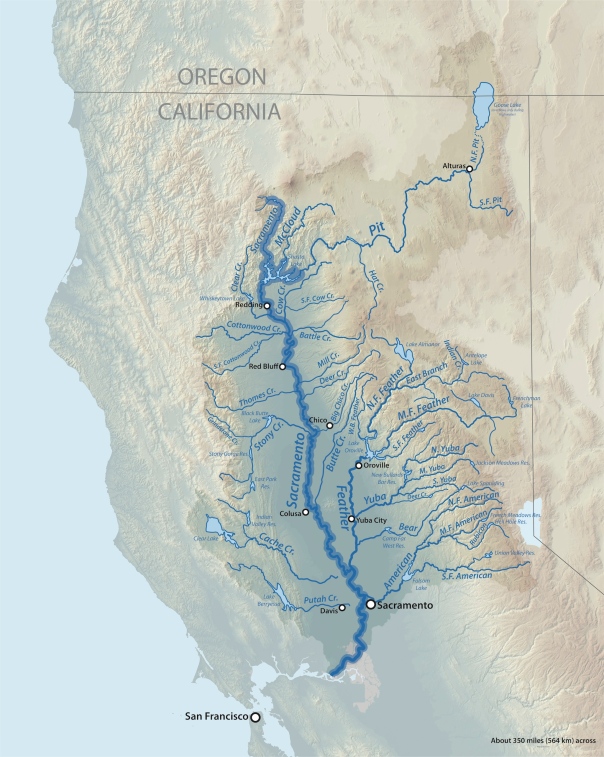 Anyone interested in a more thorough explanation and less reduced graphic of these Sacramento River headwaters would do well to check out this blog post I ran across, which almost makes me want to put on my waders and go slogging through the waterways, further up and further in to the highest lakes and springs.

Almost. But realistically, who I am is this sluggish woman in the photo below, standing in one place as I look out at the little North Fork across the way, and wishing Mr. Glad were with us, or that he would be waiting at home for me, and I would soon be with him again and telling him what I saw and learned. Many of my joys on this trip were muted by not having him to share them with. He loved looking at maps, too, and planning trips to new places.

Well, this was a new place for me, and I did love it. What is more refreshing than being on the brink of frothing waters and breathing the clean air they stir up?

The older children scrambled over the boulders to find the best stones, and threw hundreds of rocks of different sizes into the river; they are hard workers when it is that much fun, and every rock plunging in plays a different note and tone.

It was cold – brrrr – and some of us added layers to the fleeces we already had on. I had been wearing a turtleneck with a chamois shirt I inherited from my husband on top of it, and I soon added a fleece jacket. Pippin and I took turns with a blanket that looked like something an Indian squaw would have appreciated down there by the river at night.

Scout and Ivy hopped and leaped and only fell a few times; they never cracked their noggins or landed in the river.

Notice the matching John Deere boots? I don’t know how they can navigate the rocks in those!

Pippin and I took lots of pictures of veins in rocks.

The Professor took pictures of his family and larger landscapes. The sun set and we lit our fire. We ate wraps and chunky s’mores. 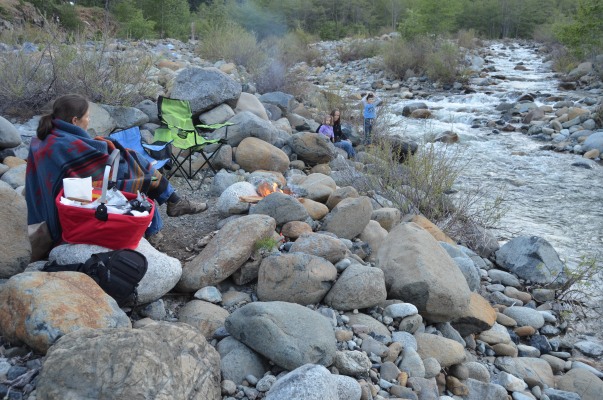 The light faded from the sky, but the firelight made it possible for Pippin and Jamie to look into each other’s eyes adoringly.

We didn’t really want to go home, but there was not a comfy place to sleep, either, sooo… We got out our flashlights and headlamps and picked our way over the stones back to Batvan. The grandma waited in the car with the children while the parents loaded up, and then we drove back home, so refreshed and worn out that we were quite content.

9 thoughts on “Evening fire by the river.”