I thought I might be able to do a little something for someone special, and it turned into a surprisingly big something. What surprised me was the chain of events that resulted from a simple idea that would have been too stressful even to even consider just a month ago.

The baptismal name of one of my goddaughters is Sophia, and the day that we commemorate Saint Sophia was this month, just a few days after The Feast of the Elevation of the Cross. On Sunday I suggested that she come over after Vespers on Wednesday, the evening/beginning of the name day, for a light meal to celebrate; Wednesday is a fasting day so it would pretty much need to be a vegan meal. I hoped there might be three or four of us eating it together, but wouldn’t have been surprised or unhappy if Sophia and I were the only ones celebrating. 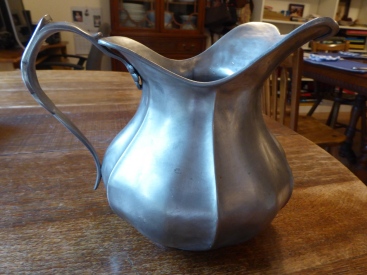 This was not a very well thought out party I was giving, but was more the kind of thing that is "thrown together," though that phrase does not adequately describe the flowing way the guest list and the menu developed over the next two days, culminating in a dinner party for twelve! It seemed to me in the end that God had used this desire I had to bless my friend to steer me in the right direction, down the path at the end of which I discovered that I am adjusting to not having a husband to cook for, and that my grief is less consuming and disabling than before.

On Monday I shopped, after the festal liturgy, and put extra leaves in the table. Tuesday I

made the soup and the cake. Wednesday afternoon I made the bread and cleaned house and set the table. I didn’t have twelve matching of anything, but I had six of the same placemats, spoons, napkins, etc., so I alternated around the table.

The soup is one I created thirty years ago out of necessity, when we lived in such a small town that I had to drive a distance to do my major grocery shopping. One day the cupboard was somewhat bare and I didn’t want to make that trip, so I concocted this stew using what I had on hand, that has the colors of the Italian flag in its ingredients, plus some Italian flavors, hence the name. It’s probably the only recipe I’ve created that has any kind of interesting name to go with it.

I haven’t actually tried using fresh basil, which is very odd since in the last decades it’s been so available in my garden and would seem to be preferable. Having pulled up my spent basil plants only the week previous, I didn’t have it available this time, either. I thought about buying a bunch, but decided to just go with the original recipe for this party and be safe.

In a 16-qt pot or larger sauté the onions, and garlic if using, in olive oil. Add the beans and water to cover 2 inches. Simmer for about an hour.

Add the salt, pepper, and bay leaves. Simmer another hour, adding water as needed to keep it soupy.

Add the red potatoes, basil, and parsley. Simmer until the potatoes are tender, adding water as needed. Adjust seasonings and serve. Nice to make the day before so the flavors can mellow together longer.

It seemed to me that the soup and cake were the backbone of the culinary aspect, so I had to decide on those elements of the dinner at the outset. The cake I discovered on this website after browsing a while online. I wanted it to be vegan and also not chocolate, because these days I’m afraid of losing sleep over evening chocolate. The only change I made was to cut the sugar in the recipe from 1 1/2 cups to 1 cup, and it was just right.

I did make the Caramel Sauce, which I think is optional. I wouldn’t make it again, because 1) Caramel is much better with butter or cream, 2) Making caramel is a bother, and I’m not sure I didn’t scorch it a little (though it did taste nice with the cake), and 3) Everyone said it was completely unnecessary because the cake is perfect the way it is.

I appreciated the lack of cinnamon in this cake, because I think it gets overused in baked goods, and the spices that were present were not so heavy that they overwhelmed the subtlety of the pears. I have transcribed the recipe after making my adjustment. 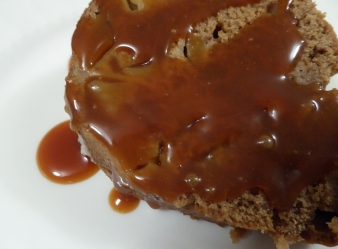 Preheat oven to 350°F. Grease bundt pan and set aside.

Pour batter into the bundt pan and bake until the cake begins to pull away from the edges slightly and a toothpick inserted into the center of the cake comes out nearly dry, 45 to 60 minutes.

Let cool for 5 minutes then use a knife to carefully loosen any stuck sides. Invert cake over a wire rack and lift off the pan. Let cake cool completely. Carefully transfer cooled cake to platter or cake plate and dust with powdered sugar, if desired.

While the cake cools, make the caramel sauce. In a small bowl, whisk together the coconut milk, vanilla and salt. Set aside. Add the sugar and water to a medium saucepan over medium-high heat. Stir just to combine, but do not stir after that! Allow mixture to come to a boil and watch it carefully. After about 6 minutes, the mixture will start to turn golden, then light brown, and it will smell like caramel. As soon as it has turned brown, slowly pour in the coconut milk mixture. The caramel will bubble enthusiastically at first. If the sugar hardens around the whisk, don’t worry, this is normal – just keep stirring and it will dissolve. Continue cooking, stirring occasionally, until the caramel sauce has thickened, about 5 minutes.

The caramel sauce may be made ahead of time and kept refrigerated in an airtight container. It keeps well for up to 5 days. Allow the sauce to come to room temperature to thin out a bit before serving. You can also warm it in the microwave for a few seconds to speed up the process.

It was a special evening in that two of my guests were named Sophia, and our priest was able to come, and “my” Sophia’s godfather as well. We had a lively group with more food contributions to the table coming in the form of salads, and much good and edifying conversation coming from everyone. The soup was popular and not much was left over.

We ate grapes, too, giant seedless Perfect Grapes, the consensus was. I made Himbasha bread, and it was the only part of the dinner that I wasn’t truly happy with. I overbaked it trying to make sure it would be chewy enough, and it ended up awfully crusty, but my friends thought it was wonderful because they like the crust. It was fresh, at least! I’ll have to keep working on that recipe, which I’ve told about before.

A couple of the women did most of the clean-up, so that part was easy, too. My feet were sore, but Sophia was radiant and blessed, which made me very happy.

13 thoughts on “I surprise myself.”

The soul becomes dyed with the color of its thoughts.