A young friend named Lilly came to visit from Idaho one evening, and a rude head cold fell on me the following morning. I managed to take her to Vespers, but on Sunday I was glad that she could go to Liturgy with Kit, because I was too sick to attend. In the evening Kit and Lilly cooked a wonderful breakfast for our dinner, trying out a new recipe from the 75th Anniversary Joy of Cooking for Lemon Pancakes, to go with bacon and eggs. Perhaps that sped my healing?

This morning I felt a little better,  and as I sat down with my tea by the sliding glass door I was surprised to see a new addition to the garden – a tall pole with a bird feeder hooked on at the top. Kit had set it up the day before, close enough that we could easily see the birds that come to it. And soon they did! Lilly and I saw a goldfinch, a jay, a towhee and a dozen juncos in the garden, many of them gathering under the feeder to peck at the seeds on the ground.

As I sat there weakly but joyfully watching, I noticed my mind fretting in the background, muttering something vague about chores to be done or books to be read. It was downright ridiculous murmuring, and I almost laughed at the idea that there could be a more sublime and worthwhile activity than watching birds outside my window, especially when I wasn’t at the time fit for anything more strenuous.

Lilly said that birds like bark such as I have in my planting bed mulch, because they like to peck around in it and find things to eat The jay was doing this, and then he hung on sideways to the feeder pole and studied the hanging ball of seeds, but didn’t manage to access it. My new garden is full of plants that are known to provide a good habitat for birds and bees, but I didn’t expect them to flock here so soon. Today they didn’t pay any attention to the fountain, but that is probably because the rain has made plenty of drinking pools all over the neighborhood.

ce she moved from here seven years ago. It was an overcast day and the ocean was roiling like dirty dishwater, but there was no wind, and the air was as fresh as could be. Rivulets were running from the cliffs to the shore, and the beach was covered with twigs and seaweed and all kinds of storm “trash.” Gulls and sandpipers and another kind of water bird — or were they merely junior gulls? — and a crow were enjoying all the new moisture in the air and on the sand.

Some of the dull brown-gray rocks had bright orange quartz-y rocks embedded here and there, harder layers that hadn’t eroded as fast and ended up looking as though they were pasted on. At least, that’s my assessment.

I was so glad not to be slouched

over my tea indoors all day; strolling on the beach was not too taxing, nor was driving to the coast, though it took longer than expected because of flooding and detours. I took Lilly to the Birds Café and we ate clam chowder while looking over the grayness of the wet landscape and bay.

Now I’m fading again, but so happy to have accomplished and enjoyed these simple pleasures even when under the weather, and in the weather. And with the dear birds! They certainly brighten up our world. 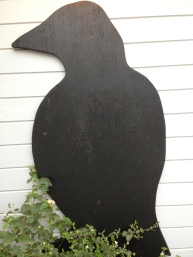 11 thoughts on “Birds fly under the weather.”