In the back yard I heard the jay before I saw him, as he remarked in short screeches about the breakfast I’d laid out. In the last couple of weeks I’ve taken pictures of doves, chickadees and juncos at the feeders, but the jay was the first to come since I moved this one closer to the window, and he is a larger target to focus on, so his picture came out best.

As soon as he flew off I went out front to tackle the perennial bed that was a mess, but before ten minutes of weeding had passed, I had a burning need to go back indoors and fetch my Weeds of the West.  I returned to sit on the bench swing and leaf through the whole book, trying to find the names of two or three weeds that had challenged me that morning. It’s good to know your enemy.

Though it’s hard to think of Persian Speedwell as an enemy. It is pretty, and the book says “It was probably introduced as a border or rock garden ornamental.” See, the ladybug likes it.

I spent a lot of time on the beds where chard, collards and kale grow, and I picked a big bowl of greens which I washed later in the day. In the picture below you can see Swiss chard behind the speedwell and also the feather-like arrangement of “scattery weed” seed pods that exploded a few minutes later at the touch of my hand. 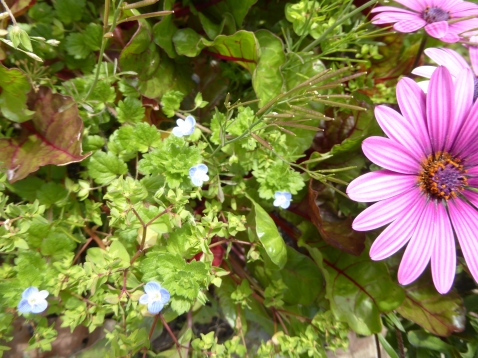 I still have not found out the real name of that scattery weed, whose picture I re-post below. In the past I asked if any of my readers knows its name, but they did not; maybe one of my newer readers does? I couldn’t find it in Weeds of the West. It arrived in our garden in the last ten years. UPDATE: It’s Hairy Bittercress or cardamine hirsuta.

Just a few feet away from the Persian Speedwell — a weed to me — is another cultivated type that I planted because I wanted it, Creeping Speedwell (below). So far the Persian has not even tried to invade the Creeping, though if the Creeping can be said to creep, the Persian gallops.

Before Fall I plan to revamp this whole area, but in the meantime, I must try to keep a little order. Today I put in several hours of work and got plumb tuckered out! I’m glad tomorrow is a day of rest.

15 thoughts on “I watch the birds, bees and weeds.”