Last weekend I spent a few days in the High Sierra at my family’s cabin, where the winters bring such deep snow, the village by the lake is only accessible for four months of the year – or if we’re so unlucky as to have a year of little snow, four and a half months.

Every year there is an annual meeting of the village property owners, and two or three community work days. I have never before participated, because I live far away. In the past I have let my sister and brother take care of these things, and count myself blessed to even get myself to the cabin once or twice a summer. But last week I was able to go up for the group effort, to work and attend the meeting!

The most fun for me was seeing the high country in July rather than my usual September, and the many wildflowers. I took hundreds of photos, and have been trying to learn the names of new species.

Even when I was cleaning out a culvert as part of the community work, I discovered some columbines and was glad I had my phone in my pocket, even if there was no cell reception.

Some flowers are tiny tiny, about a half centimeter in diameter, but even so, scattered like confetti below showier blooms, they make a nice backdrop. Those are my fingertips in the second photo down. 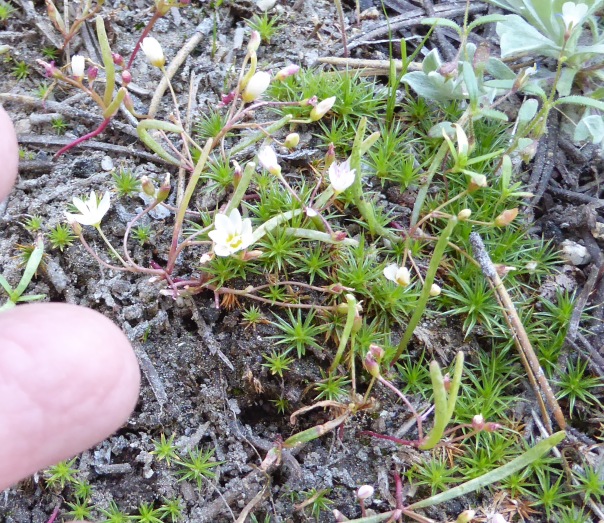 I haven’t figured out very many species, and some will no doubt remain a mystery for the foreseeable future, but Pippin helped me identify some right away via text messages. 🙂 The one below I found at a lower elevation and it is still unnamed. UPDATE: Thanks to Mary’s helpful prodding (see in comments), I have researched what these puffy things might be, and decided that they are probably Grand Mountain Dandelion, Agoseris grandiflora. 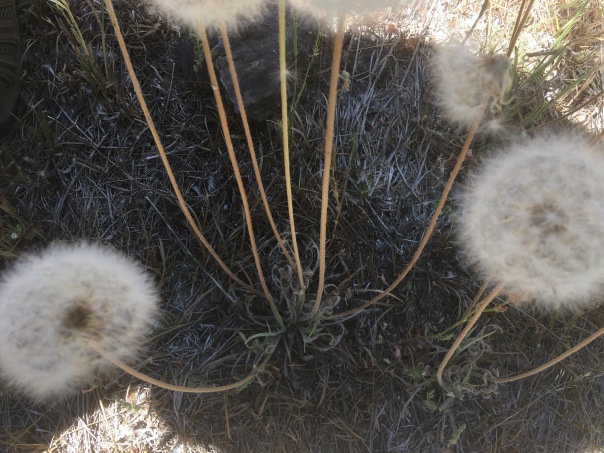 These I am sharing are just a few of the many I saw; there were also lupines, Pearly Everlasting, other penstemons, yarrow…. On a gravelly turnout Pussypaws (Calyptridium umbellatum) had bravely erupted heedless of cars that might soon crush them.

The Shooting Stars (Dodecatheon) were in wet areas. From my perusing of wildflower guides I’m guessing that the bright pink one is Jeffrey’s Shooting Star and the pale pink is Bog Shooting Star. 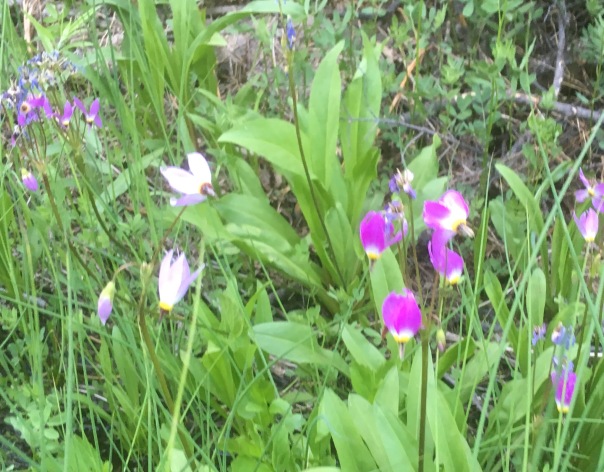 My plan is to return to the mountains a month from now. It will be interesting to see if I find any new species that bloomed a little later. Or do most of them pop out as soon as the snow has melted? I’m just glad that I arrived in time to meet them!

16 thoughts on “Lots of mountain wildflowers and a little work.”