I’m staying with Kate and Tom in the Suburban District of Mumbai, which is the larger part of the city and brimming with things to see and do. After spending my first ten days here, I had my first brief experience of the downtown hub of South Mumbai one afternoon when Tom and I made the trip with a few small goals in mind. The excursion was fun for me even though it was somewhat unsuccessful in the first stages.

We thought we’d visit the tip of the island, where in 1858 the British consecrated the Church of St. John the Evangelist as a memorial to soldiers slain in the First Afghan War of 1838. I had seen it on a list of The Ten Most Architecturally Interesting Churches in Mumbai. It is known as The Afghan Church

The church sits in the middle of an area of military buildings, a little remote from the busiest part of the city. Tom hadn’t yet been this far south. In this photo I found online, you can see the two towers of the Mumbai World Trade Centre in the background with the church spire in front. As we approached, a couple of British hippies were leaving, and they told us that it was locked, and “spooky.”

We walked around the building and noticed the wall stones stained black, unkempt landscape, and old signs lying randomly around, and could well believe that it was locked and never used. How sad, that no one, or at least no one who had the means to do anything about it, cared about this church that had a beautiful design and holy purpose. I took a picture of the detail on the base of a large stone cross in front of the church, which is my favorite image from my visit.

As we were walking out the gate again a small boy wandered over to us from a little house nearby and told Tom that he had the key to the church. I at least was not interested enough to take him seriously; I had given up on the Afghan Church at that point. We read online later that “Visitors may obtain access to view the historic church interior from the [lax] on-site custodian.” The website also said that a small congregation there holds services.

We stopped by another venerable building, the General Post Office, because we’d heard that they sold postcards, but no. Whether they normally sell them or not we never learned. We visited a room where several people seemed to be at work, but they wouldn’t, or couldn’t, tell us anything but that they were closed. I haven’t given up hope that I will find some postcards in time to mail them before I go home — maybe when I visit a more touristy spot?

Our last stop was exciting and satisfying, the iconic Victoria Terminus of Bombay, known simply as CST now, for Chhatrapati Shivaji Terminus of Mumbai. Over 1,000 trains come and go every day from 18 platforms in this huge building, and for a watching companion I had my son-in-law who is the best guide possible, fascinated as he is — and knowledgeable about — railways all over the world. We enjoyed taking videos in both slow-motion and time-lapse modes, of the swarms of people flowing into and hopping out of the cars. Two million passengers pass through daily! I could have stared at that scene for hours.

This station was planned as a commemoration the Golden Jubilee of Queen Victoria, and took ten years to build from the beginning of the project in 1848. It is said to be “a fusion of influences from Victorian Italianate Gothic Revival architecture and classical Indian architecture.” It is so grand, it is often mistaken for a palace or a cathedral. 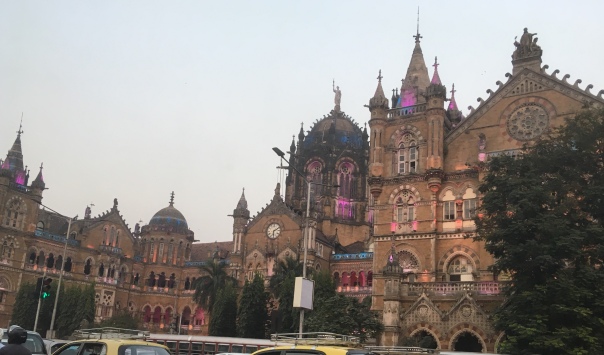 The lights that have been installed on the exterior seem to me to contribute to an ongoing fusion of style. 16 million lights in different colors are available to create an ever-changing display according to the different festivals throughout the calendar. As we were driving away at dusk, I was surprised to see lavender hues that hadn’t been there in my first photos, and the next day I read about the lights and found examples of the most brilliant displays to show Kate.

Since our visit I’ve also seen unbelievable and scary train scenes from Tom’s phone, that he recorded previously and of the sort I’ll never have the opportunity to witness firsthand. My acquaintance with Indian railways and trains is certainly minuscule at this point; I hope to actually ride a train before I’m done, and afterward I should have more to tell.

Here’s a car with the picture on the side showing that it is reserved for women. I won’t be riding in one of those, because if I go, it won’t be without my competent male guide along. For now, if any of you has a tale to tell of Indian train rides, I’d love to hear! 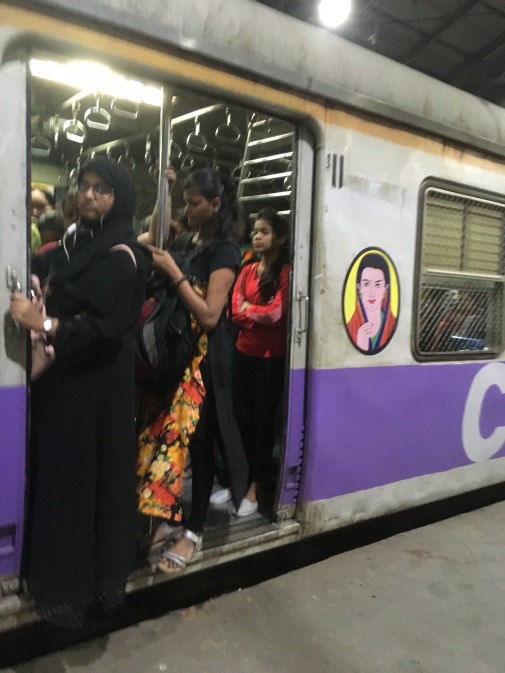 8 thoughts on “An afternoon in South Mumbai.”